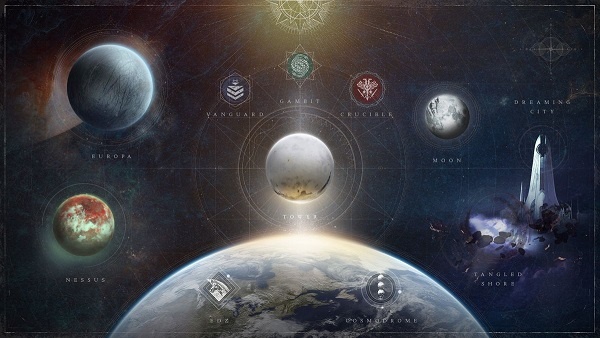 Destiny 2 Content Vault has received mixed reactions from the community but Bungie has a solid plan behind it, at least that’s what they think. Speaking with Edge Magazine, Bungie’s Mark Noseworthy and Luke Smith discussed the content vault and the future of Destiny.

Crafting Destiny has never been easy for the development team. The game’s install size currently stands at 120GB on PS4 and it’s full of raids, quests, bosses, and much more. Developers constantly maintain the game so the monster hunting never stops. Bungie knows there won’t be a Destiny 3.

“We something think of Destiny like running Disneyland, and there’s only so much space inside the Disney land – but unlike Disney land, it doesn’t close at 10 at night and is always running,” Mark Noseworthy, general manager of Destiny 2 tells Edge Magazine.

Now that we are on the cusp of a brand new console generation, Destiny 2 is only halfway through its life. As the game gets old its attractions age, Bungie fights to keep it going; and as the next-gen further raises player expectations for the scale and fidelity of video games, Bungie had to do something. In comes Destiny 2: Beyond Light; on November 10, Bungie will release Beyond Light alongside Xbox Series X and S.

Destiny 2 will kick off a new future with the release of Beyond Light. The expansion starts a three-year cycle of storylines, new planets, and awesome gunplay. On the other hand, this “expansion” is also cutting down and making the game smaller. Four planets, a star-eating ship, farm, raids, strikes, and much more are being moved to the Destiny 2 Content Vault until Bungie decides to “unvault” it and make pieces of old content playable again.

“We want Destiny to be sustainable for us to be able to actually develop,” says Noseworthy. There are limits to how big and complex the game can get, and if we just constantly add more and more and more, eventually the balloon just pops, right? So, hey, let’s take a little bit of air out of the balloon, so we could put some new fresh air in.”

Bungie’s problem is administrating years worth of content, and bloated install sizes. The solution came in the form of Destiny Content Vault. If Bungie gets it right, it solves the problem, if not, then the mixed reactions will turn into a full-blown backlash from the community.

“The onus is on us to make vaulting content fucking cool,” says creative director Luke Smith.” That’s why the first thing we are unvaulting is the Vault of Glass, one of the prized possessions in Destiny’s Vault, if you will.”

Vaulted items won’t disappear forever and their reappearance will be cool because it’ll be led by a storyline, not simply turning up from out of the blue. What goes into the vault or comes out of it is defined by multiple things but it starts with where the story goes. “Things coming out of it will make some kind of sense,” says Luke Smith.

Destiny 2: Beyond Light expansion and update is releasing on November 10 for current and next-gen consoles and PC.