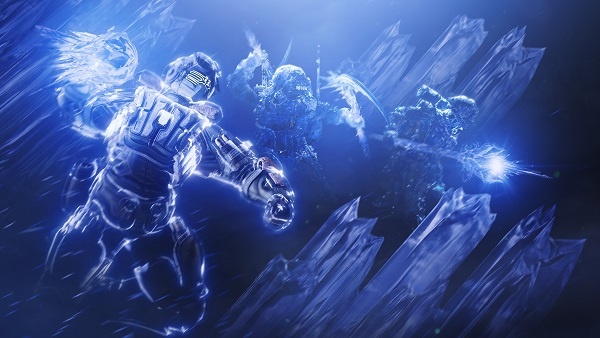 In Destiny 2: Beyond Light, Statis as an element is only available in one weapon, the exotic heavy Grenade Launcher called the Salvation’s Grip. When shot, Salvation’s Grip freezes enemies in place – just like any Statis subclass would do. You can also fire it at an object/wall to create icy platforms for you to climb. Holding the fire button increases the amount of damage and Statis crystals created. In this Destiny 2: Beyond Light guide, we’ll walk you through everything you need to know about how to complete the exotic quest to get the Salvation’s Grip heavy GL.

Before we begin, do note that despite being a Power Weapon, the purpose of Salvation’s Grip is not DPS. Its sole purpose is to provide CC which it does incredibly well. We’re sure that it’ll come in handy in speedruns since it’s way more useful than Sticky Grenades on something like a Mountaintop. You also need it to get a few Aspects.

Complete the Beyond Light Campaign
The first thing you’ll need to do is to complete the main campaign of Destiny 2: Beyond Light. We’d really recommend doing it with someone who is around 1200 PL or with your 2nd character. The campaign can be a little ruthless if you’re under-leveled so having a fireteam definitely helps knocking this step out quickly.

Defeat Captains and Servitors
To defeat 10 Captains and 10 Servitors, we’d recommend heading into the Concealed Void LS on Europa. It doesn’t have crazy PL requirements and you should easily be able to farm the needed kills in 3-4 runs.

Find the Prototype
To complete the step, you’ll need to defeat one of Eramis’s council members in an Empire Hunt. Remember that the Empire Hunts aren’t unlocked from the beginning and require you to complete a few pre-requisite questlines. After completing these steps, you should be able to purchase Empire Hunts from Variks on Europa for 20 Herealways Pieces.

Defeat Statis-afflicted Enemies
The step requires you to defeat enemies with Statis abilities or who are afflicted with Statis. You can do this anywhere i.e. Vanguard Strikes, Gambit, Lost Sectors, Public Events, etc. We’d recommend running into a Lost Sector of your choice. The one on Artifacts Edge, Nessus is pretty good due to a large number of enemies grouped together.

You can also run the Monte Carlo exotic Assault Rifle with high Disciple to recharge your melee ability and grenade faster. Remember to only kill the enemies who are under the effects of Statis.

Complete Statis Stealing Mission
After getting the Statis Containment Device, return to Charon’s Crossing on Europa and start the “Stasis Stealing” mission. The said mission is probably the best thing in the entirety of Beyond Light which is why we don’t want to spoil it. One thing we’d really recommend though is to play with sound on.

Speak with the Drifter in the Annex
Once you’re done with the Stasis Stealing mission, return to Drifter in the Tower to get the shiny exotic Grenade Launcher, Salvation’s Grip.