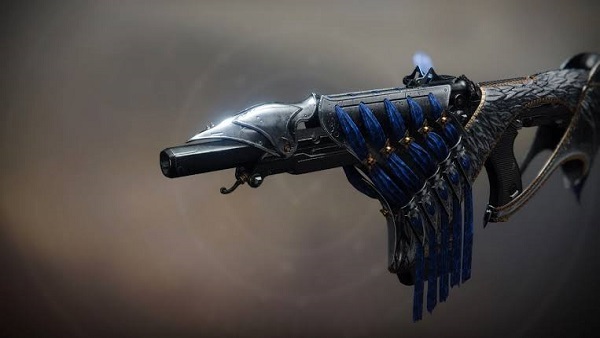 The 2nd Exotic Quest in Destiny 2 Season of Dawn is for an Exotic Kinetic Fusion Rifle called Bastion. Despite being slated to release on Jan. 28, the Bastion Exotic Quest can now be completed by everyone by completing the Corridos of Time quest.

If my memory serves me right, Bastion should be the first Exotic Fusion Rifle that goes in the Kinetic slot. Of course, we’ve got the recently buffed Arbalest but that’s a Linear FR. Following are all the quest steps to complete Bastion quest in D2 Shadowkeep:

Step #2 – Memento
Once you’re done with Corridors of Time quest, speak to Saint-14 in the Tower and obtain “Memento”. It can only be acquired on the character on which you’ve done all Saint-14 quests.

Step #3 – A False Refraction
Speak to Saint-14 in the Tower. He hangs by the Tower Hangar, near Amanda Holliday.

Step #4 – Spoken Word
To complete the step, you’ll need to eliminate Fallen Captains and Servitors anywhere on the Tangled Shore. You should easily be able to find one roaming near the north of the Thieves’ Landing landing zone.

Kill the one near the landing zone and head toward the area where you’re supposed to travel while doing the Hollowed Lair strike. You’re most likely to find either a Fallen Captain or Servitor in the building.

If you’re lucky enough, you may also find an active Public Event that should spawn multiple Fallen Captains. Keep at it until you’re done with this step of the questline.

Step #5 – Lost Connection
For this step, you simply need to visit Spider on the Tangled Shore.

Step #6 – Backroom Brawl
This step requires you to head over to the Empty Tank Lost Sector in the Thieves’ Landing. It’s the Lost Sector with the Paul McCartney song. What you’re looking for is to defeat Aksiniks, Bound by Honor whom you’ll find inside the Lost Sector. Once you’re done, return to Spider for more info.

Step #7 – A Strong Arm
This is the step that will most likely take the most of your time. To complete this step, you’ll need to defeat 30 challenging enemies, turn-in 10 Spider bounties, and complete 8 Public Events on the Tangled Shore.

Anyhow, there isn’t any shortcut to this one. Grab Spider’s bounties, travel through the Tangled Shore to complete Public Events, and defeat challenging enemies to complete the step.

Step #8 – Rude Awakening
To complete this step, you need to head over to the Trapper’s Cave Lost Sector on the Tangled Shore. Once there, investigate a grave there to complete the step.

Step #9 – Altered Chief
This one requires you to fire up a special version of the Hollowed Lair strike on the Tangled Shore and complete it.

You need to complete “The Hollowed Lair, Memento” and defeat Reysk, the Waning Light who has been twisted into a Scorn Chieftain. Once you’re done, return to Saint-14 in the Tower to claim Bastion.

With the Exotic Quest out of the way, let’s talk about Bastion’s unique perks:

From the looks of it, it seems like Basion Exotic should do well in Destiny 2 Nightfall Ordeals and Master Nightmare Hunts if we ever get out of Divinity/Izanagi and rarely Eriana’s Vow meta.