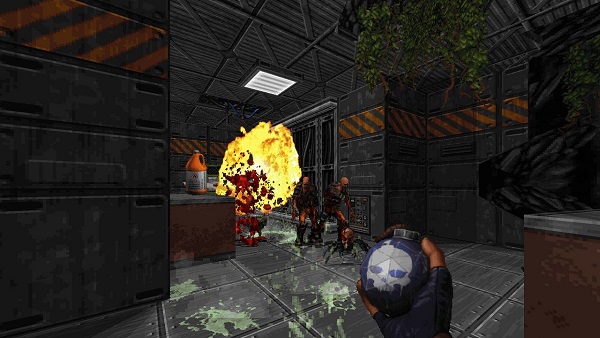 Descenders developer Mike Rose, known for his criticism of G2A, took to Twitter to call out Ion Fury’s “homophobic” elements. The team behind Ion Fury, 3D Realm and Voidpoint refused to remove certain elements of the game which are considered offensive. This decision naturally led to criticism which then led to Mike Rose taking his anger to Twitter.

He shared his opinion on Twitter in a thread in which he engaged with Viodpoint. He called out Viopoint harboring “Homophobic” people in its development but in doing so he made sexist comments, calling the development team a bunch of “Twatbags,” a slur used to refer to female genitals. It is ironic that someone standing to fight this kind of behavior would so comfortably do the same.

Hey @voidpnt! Removing childish, homophobic jokes from your game is not fucking censorship, you ignorant twatbags. It's called being adults and not school children.

If you really don't see the difference, you probably need to go back to school anyway! https://t.co/Djz5fh1DCQ

Was it the school children that taught you to call people twatbags…?

I tend to use that sort of language when addressing homophobic people. And you guys have admitted you're homophobic by leaving the homophobic slur in your game, right?

I'm sorry, but if you think playing off the brand name "OLAY" to write "OGAY" is a homophobic slur, I don't know what to tell you. If you're looking to be offended you will often find what you're looking for.

just so I understand — you believe that making a joke, where you replace a part of a name with the word "gay" for a laugh — is not you making a homophobic joke?

I believe in a concept called "intent"

ok cool! I personally believe in not being a dickhead, but each to their own I guess?

Throughout the conversation, Voidpoint did its best to keep it as professional as possible but ending with a slight jab to Mike Rose. In one Tweet Voidpoint mentioned “intent,” suggesting that it was not their intent to use it the way people are taking it.

Now, if Mike Rose comes out to clarify his remarks he’ll probably say that “twat” also is a slur used to call someone an idiot and it wasn’t his “intent” to use it the way we are taking it. Again, it’ll be ironic.

3D Realm and Voidpoint shared the following statement on Steam.

We will absolutely NOT be censoring Ion Fury or any of our other games, now or in the future, including but not limited to by removing gags such as gaming’s most controversial facial wash.

We do not support censorship of creative works of any kind and regret our initial decision to alter a sprite in the game instead of trusting our instincts. 3D Realms and Voidpoint stand together on this matter.

Last but not least, please respect our need to keep our community forums clean from hateful messages, spam, or off-topic threads. We recognize our mistake and have received your message loud and clear!

This is a developing story, we’ll have more on this as soon as further information comes to light.