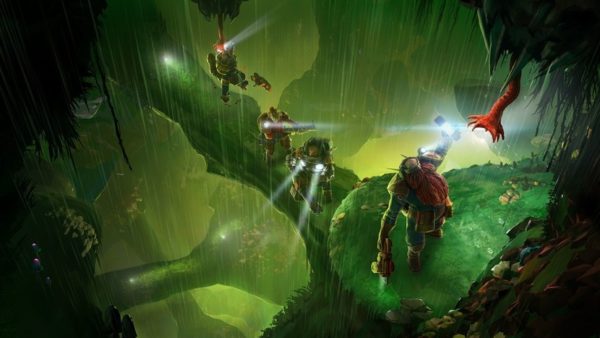 Deep Rock Galactic PC is facing errors and issues like Crash at startup, black screen, X3DAudio1_7.dll not found, XAPOFX1_5.dll Missing, Fatal Error, and more. Here I have compiled a list of errors that players are experiencing with the game along with their fixes and workarounds.

Deep Rock Galactic has finally come out of the early access and has fully launched. However, the PC version of the game is still facing issues and errors like LowLevelFatalError, Unhandled Exception, stuttering, No Audio, and more.

Black Screen is a common issue among PC video games and Deep Rock Galactic is no exception to it. Players are reporting that when they launch the game they can hear the audio and mouse cursor moving over the options but, all they see is a black screen.

Another reason for the black screen at launch with Deep Rock Galactic is the GPU drivers. Just roll back to an older version and the issue will be fixed.

According to Deep Rock Galactic players, when they launch the game they get an error telling them certain .dll files are missing or not found or 0x80070643 Fatal Error. These missing DLL files include:

All you have to do is download and install the latest DirectX files and the errors will be fixed.

Some players have reported that they are getting the LowLevelFatalError as the game crashes on their laptops. The following is the full error.

If you were able to play the game fine for hours before this error started to pop up then just restart your system and the LowLevelFatalError will be fixed.

Otherwise, your laptop is probably running the game on the integrated GPU rather than the dedicated one. For Nvidia GPU users, open Nvidia Control Panel > Manage 3D Settings > Program Settings > select the game. Under step 1, select the Non integrated GPU option, apply the change, and launch the game and the error is now fixed.

According to players, Deep Rock Galactic crashes right at launch or doesn’t launch at all. There are multiple reasons behind these issues and here is how to fix them.

Lack of administrative rights is one reason for the game to crash at startup. Make sure you are using a Windows account with admin rights. If you are, then right-click the game’s exe > Properties > Compatibility tab > check “Run This program as an administrator”. Apply the change and the issue will be fixed.

Another reason for Deep Rock Galactic to crash at launch is the use of third-party software like MSI Afterburner or GeForce Experience. Disable any third-party monitoring software you are using and the game won’t crash at startup.

According to some players, when they launch Deep Rock Galactic they get the following error.

This issue is related to your GPU driver. Do a complete uninstall of the GPU driver and reinstall it, make sure to do a clean install. This will fix the Unhandled Exception error.

Some players are reporting that they aren’t getting any audio while playing Deep Rock Galactic. One reason behind the no audio or no sound issue is the game’s own audio equalizer. Just disable it and the audio will start working just fine.

According to Deep Rock Galactic PC players, they are experiencing micro-stutters while the FPS is stable. To fix this, disable in-game v.sync. Open Nvidia Control Panel > Manage 3D Settings > Program Settings > select the game > set Vertical sync to “On”. Apply the change, launch the game and the stuttering will be gone.

If the game is still stuttering then follow the steps above but set Vertical sync to “Fast”. Fast option sort of simulates G.sync as it allows the GPU to render as many frames as it can but can only as many frames as supported by the monitor.

Meaning, if the game is rendering 80 FPS and the display is 60 Hz then the game will only display 60 FPS while the rest of the frames will be discarded. To avoid this, lock the game’s FPS. You can do that in Nvidia Control Panel > Manage 3D Settings > Program Settings > select the game > Max FPS Limit. This will not only fix the stuttering but will also save the GPU from rendering excess frames.

That is all for our Deep Rock Galactic fixes for errors like the black screen at launch, Fatal Error, LowLevelFatalError, stuttering, crash at startup, and more. If you are facing other errors and issues with your PC then also see our hub for commonly occurring PC errors and their fixes.