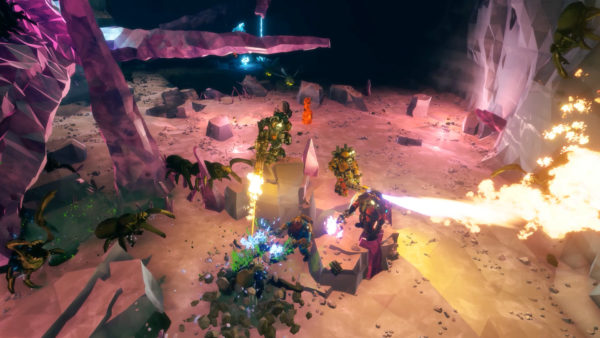 Deep Rock Galactic, the 4 player co-op FPS is now out of early access with version 1.0. Our favorite space dwarfs are back with full force to combat alien monsters. However, they need the right loadout and equipment for that. In our, Deep Rock Galactic Builds guide we will discuss the best builds based on the changes made after version 1.0.

There are 4 unique classes in DRG and it helps if you pick the right class based on your play style. You can play as one of the following classes:

You can say this is an all-rounder build which is centered around the Deepcore GK2 Assualt Rifle. Use the Super Charged Feed Mechanism for increased fire rate to get out of tough situations or pin down the enemy when required. Also, get the Expanded Ammo Bags to carry additional ammo. For increased damage, we suggest you get the Improved Propellant.

Speaking of damage, having a weak spot damage bonus would help us a lot so get the Hollow Point Bullets to go with your Deepcore GK2 build. Speedy movement is an important element to have so Battle Frenzy is a no-brainer as it gives you a speed boost after getting a kill. To top off your Deepcore GK2 build for Deep Rock Galactic, get the Overclock: Gas rerouting for a clean overclock that boosts the rate of fire and speeds up reloads.

Next on the list of best Deep Rock Galactic builds is the M1000 Classic build. As the name suggests this one is centered around the M1000 Classic Semi-Auto Rifle. This is a sniper build so our weapon modifiers will complement the fact. We will be using the Increased Caliber Rounds for extra damage and Fast-Charging Recoils for faster Focus.

For extra Focus damage bonus get the Killer Focus and just as with the DeepCore GK2 build, use the Hollow Point Bullets. Getting the Hitting Where it Hurts will allow you to stagger the enemy with focus shots. To complete our M1000 Classic build for Deep Rock Galactic we will get the Overclock: Active Stability System as it allows for normal movement speed during focus shots but it will lower the focus shot damage which is a sacrifice worth making.

This Deep Rock Galactic Build is centered around the Jury-Rigged Boomstick Shotgun. Since we are using a shotgun, get the Double-Sized Buckshot for additional damage. Also, use the Double Trigger for an increased fire rate that does additional damage.

Use the Expanded Ammo Bag with this build since we will be emptying our shotgun pretty quickly using the Double Trigger. Next, we will spend some points getting the Tungsten Coated Backshot to deal more damage to armor. Get the White Phosphorous Shells that turn 50% of your damage into fire damage. An optional add on is the Overclock Jump Shells.

Zhukov NukI 7 is a powerful SMG we’ll be using to contract this build for Deep Rock Galactic.   Since the SMG has a high-fire rate it is best to get the Expanded Ammo Bags. Mix that with the High Capacity Magazine for additional rounds. We will also get Increased Caliber Rounds for extra damage. It is great to have Get in, Get out as it gives you speed boost after emptying the magazine. You can use the boost to buy time for reloading while avoiding fire. An optional add on the Overclock: Gas Recycling.

As revealed in the name, use the Flare Gun with this build. Get the Expanded Ammo Bags for additional ammo storage and High Capacity Magazine for increased magazine size.

We will update the guide with more builds soon. Check back for more in Deep Rock Galactic.