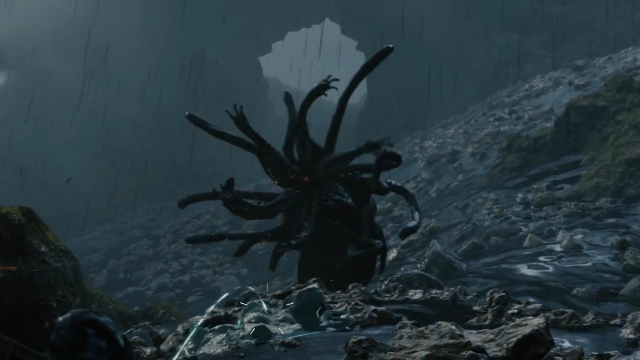 The Squid Boss in Death Stranding is the boss that Higgs creates at the end of the second episode. The boss fight is relatively easy and can be done quickly if you can keep your ground and attack wisely. The large BT created by Higgs looks like a squid and mainly attacks from the sea so you need to keep moving or you’ll be dead faster then you can realize. This guide will include all the details on the squid boss in Death Stranding and tips on eliminating it with ease.

How To Beat The Squid Boss In Death Stranding

At the end of the episode where you arrive at the shipyard and board the ship Higgs will show up. Higgs will show up and create a giant BT. Higgs will disappear and your objective will be to eliminate it. The Squid boss uses its tentacles to attack you and will rush you from time to time.

This fight will take place on the ships so you need to keep your ground and move constantly. Staying on a single ship for a long time can be dangerous for you as the Squid will try to sink the ship you are on. Avoiding its tentacles isn’t that hard if you are completely focused.

Tips On Dealing With The Squid Boss

The Squid can do some good damage but so can you. You will need the Hematic grenades to completely kill the monster. If you have plenty of these grenades then that is perfect if not then look around for them on the ships. They can also be found around the map left by other players.

Go to the top of the ships by climbing up and then aim at the Squid and fire. Remember don’t use more than one grenade and make sure your accuracy is on point. After it takes the hit it will go into the sea and now you can move to another ship. After some time you can see it again and you will have to throw another Hematic grenade at it. Repeat the process a couple of time and the boss will surely fall in no time.

You will encounter bosses like these throughout the game. While exploration you might even find the same Squid boss but it will be weaker and you can run away from the fight if you are not feeling up to it. Of course, eliminating these boss give you rewards so if you want to fight these monsters then go to the floating BTs and you will have yourself a boss fight soon.