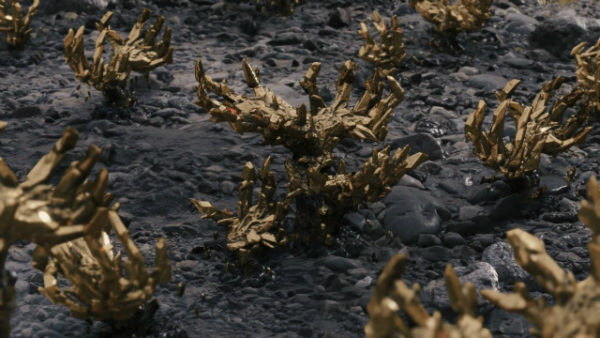 Chiral Crystals are an important part of Death Stranding’s gameplay. These crystals are used for fabricating equipment, building and upgrading structures, and power Floating Carrier.

How To Farm Chiral Crystals

Early on in the game in Episode 2, you’ll acquire Chiral Crystals as part of the tutorial. This quest unmissable that’ll give you the equipment to harvest Chiral Crystals.

You can find Chiral Crystals by scanning the area using the R1 button in a 100-meter radius. They can be found in BT areas which are the areas where it’s raining and gas-filled chasms. The following are the specific ways to farm Chiral Crystals in Death Stranding.

Kill a BT and it’ll leave behind Chiral Crystal for you to pick up. So go into the BT area and kill them if you can to get these chiral crystals. Obviously, killing a BT isn’t an easy task, below is the strategy to kill BTs.

How To Kill BTs
As you progress through the game, you’ll receive weapons that kill BTs. The first weapon against BTs you’ll get is the Hermetic Grenade. However, these are quite weak against the BTs.

As you further progress in the game, you’ll get the anti-BT handgun. This gun is slightly better than the Hermetic Grenades.

While you have other weapons to collect in the game but these two are the only ones effective against BTs.

Hit the BT with the Hermetic Grenade and then fire the gun to hit the part of the BT covered in blood. This deals the most damage to a BT and eventually will kill it.

That is all for our Death Stranding Chiral Crystals guide with tips on how to get chiral srystals and how to kill BTs to farm these crystals.