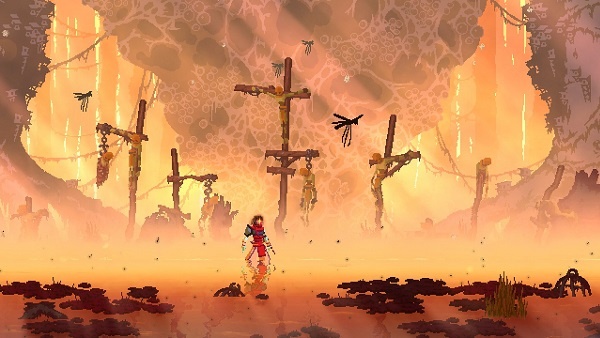 Bad Seed DLC for Dead Cells introduces new skills, a new boss named Mama Tick, and a handful of weapons. To help you find all of them, we’ve got this Bad Seed Weapons Locations guide.

The first thing that you need to do is to find the Dilapidated Arboretum key. To do so, you’ll need to head over to the Prisoners’ Quarters and interact with a blueish-red skeleton in the area.

With the Dilapidated Arboretum key in hand, you’ll be able to find these new weapons in the Bad Seed DLC:

1. Blowgun
To get the Blowgun, you need to defeat Blowgunner in the game. With this weapon, hitting an enemy from behind will 100% land a critical hit. It only takes a single weapon slot.

2. Flashing Fans
You can find this weapon from Yeeter. When equipped, repelling a projectile causes you to land critical hits for 8 seconds. It also takes only a single weapon slot.

3. Left Scythe Claw
To acquire the Left Scythe Claw in Dead Cells Bad Seed, you’ll need to defeat the new boss named Mama Tick. If you need help defeating the boss, you can check out our Mama Tick Boss guide. When equipped, you’ll land a critical strike if your previous attack was from the Right Claw.

4. Rhythm n’ Bouzouki
In order to get Rhythm n’ Bouzouki in Bad Seed, you’ll need to defeat Giant Tick. Striking with this weapon at the right time will turn the second and third hit into critical strikes. The final weapon can also take a single weapon slot.

We hope this Bad Seed Weapons Locations guide helped you find them all. For more on the game, be sure to check out our Dead Cells Wiki page.