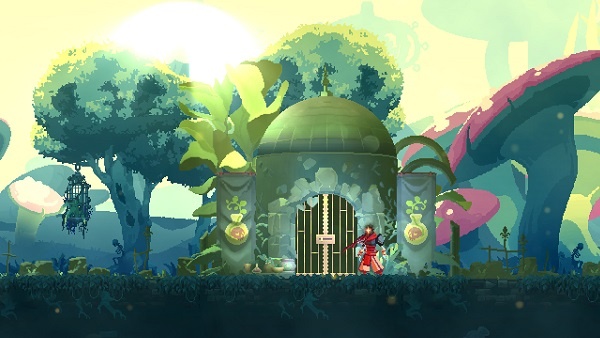 There are a few new skills to play around in the Bad Seed expansion for Dead Cells. Given how good these new skills are, you should try to unlock blueprints for them as soon as possible. To help you do that, we’ve got this Bad Seed Skills guide.

To unlock these new skill blueprints in Bad Seed, you’ll need to have the Dilapidated Arboretum key. Due to the procedurally-generated nature of the game, finding the key can be hard. To find the key, you’ll need to access the Prisoners’ Quarters and find a red/blue skeleton in the grass.

It’s from this skeleton that you’ll find the Dilapidated Arboretum key alongside the Royal Gardener’s costume. After finding the key, you’ll be able to access new areas introduced with the Bad Seed expansion and find new skill blueprints.

1. Smoke Bomb
As evident from its title, the Smoke Bomb skill engulfs you in a buff of smoke and makes you harder to detect for 8 seconds. While invisible, your first attack deals +133% more damage to the target.

Alternatively, you can also use it to escape unfortunate situations. Banished has a chance to drop it.

2. Mushroom Boi!
With this skill, you can summon an NPC to fight alongside you. In addition to tanking for you and dealing damage, you can manually detonate the NPC to deal a massive amount of damage in an area-of-effect.

These are all the new skills that you can unlock in Dead Cells Bad Seed DLC. For more on the game, be sure to check out our Dead Cells Wiki page.