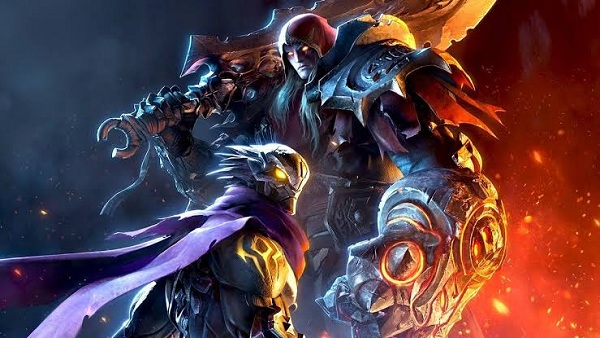 Darksiders Genesis, similar to its predecessors, features a variety of mini-bosses and bosses encounters. While playing as War and Strife, you proceed through the Hell in pursuit of Lucifer. In this Darksiders Genesis Bosses Guide, we’ve detailed all the bosses in the game and how to beat them.

There are 5 main bosses in the game with Trophies/Achievements associated with them. The rest are majors and mini-bosses that you’ll encounter as you progress through the game. The following are all the main bosses in Darksiders Genesis:

Here’s a walkthrough of how to defeat all the bosses and mini-bosses in the game – in alphabetical order:

You encounter Astarte at the end of Chapter #10. This has to be the easiest boss fight in the game. After the fight starts, you should continue to chase the boss down while attacking.

After a little while, the boss will leave the arena and ads will start spawning in. You’ll need to use your best abilities to bring these ads down and refocus on the boss as it reappears in the arena.

Continue to do it and you should defeat Astarte in Darksiders Genesis in about no time at all.

You’ll take on Belial during Chapter #9 of Darksiders Genesis. While not the most difficult, Belial has plenty of attacks that hit like a truck and can even chain-CC you for a quick knockout. Due to this, you need to ensure that you’re able to dodge them in time. Here’s a rundown of these attacks and avoiding them:

You’ll come across Blight Cannon at the end of Chapter #8 in the game. The name of the game when it comes to this boss is dodge. It doesn’t matter whether you go with War or Strife as long as you’re good with evasion.

The boss is essentially a mechanism that sprouts out toxins that damage if you pass through them. Therefore, try to stay on the move at all times. In addition to this, you’ll also need to deal with ads who will continue to spawn in the area.

Use your best and most powerful abilities to quickly deal with the boss and move on to the next areas.

Dagon from TV series Supernatural (the Knight of Hell) also makes an appearance in Darksiders Genesis. It appears during Chapter #13 of the game. Since we don’t recommend going in too close to the boss, it’s best to stick to Strife for the boss. Here’s a rundown of Dagon’s attacks and avoiding them:

Continue to dodge the attacks and hit the boss to complete it.

You’ll encounter the Flux Chamber at the end of Chapter #14. In many ways, the Flux Chamber boss fight plays out exactly like Blight Cannon one. Toxins will continue to erupt from the chamber and you’ll need to avoid them. Aside from toxins, you’ll also need to deal with the ads in the arena to complete the fight.

Grinner is another easy boss fight whom you’ll encounter at the very end of Chapter #11 in the game. There are a couple of attacks at the boss’ disposal. The grab attack doesn’t hurt a lot and you can easily jump over the beam attack. In addition to dodging these attacks, continue to hit the boss and complete the fight.

You encounter Hollow Fiend at the end of Chapter #1. Throughout the fight, minions will join the boss. You shouldn’t let them group up and eliminate them at the earliest.

War isn’t a good choice for the Hollow Fiend fight so try to stick to Strife. The following is a rundown of the boss’ attacks:

Other than this, just keep shooting and you’ll defeat the Hollow Fiend in no time.

You fight Legion Boltspitter during Chapter #3 of the game. This is another boss fight that is best tackled from a distance and so you should stick to Strife. You’ll also come across a few pillars in the area, which are great for cover.

The boss doesn’t have a whole lot of attacks bar fiery orbs and ads roaming around the arena. As mentioned earlier, try to stay behind the pillars to avoid damage and continue to attack the boss from a safe distance.

If you’re running low on HP, kill the ads in the arena to acquire some Health Orbs.

At the end of Chapter #15, you’ll encounter the Legion Shieldbearer boss. Throughout the fight, you’ll hardly be dealing with the boss and will mostly be clearing the arena of ads. Continue to defeat the ads and use your abilities on the boss to complete this short and simple battle in no time.

Your fight with Mammon starts in Chapter #6. Mammon has plenty of attacks that it will utilize during the multi-phase boss fight. As for the recommended character, you’ll need to rely on both the War and Strife to complete it. Let’s take a look at the attacks that the boss has:

Continue to attack the boss and you’ll defeat it completing the chapter and receive the Mammon Core.

Moloch in Darksiders Genesis is the final boss of the game who appears in Chapter #16 of the game. For the fight, you can choose whoever you prefer but since we need to hit hard, you should try to stick to War if you can or continue to switch between the two. Continue to dodge and attack whenever you can.

The boss also has an AOE attack, which you can avoid by moving away from it. The boss will also transform rocks into explosives that will explode once you get too near to them.

Therefore, try to stay clear of them and continue to damage the boss to complete the game.

You’ll encounter Molten Hound during Chapter #4 of the game. Similar to other bosses in the game, Molten Hound will be accompanied by a lot of ads who can generate Health Orbs. As for the boss’ attack patterns, these are:

Just try to avoid these attacks and continue to attack the boss with War’s powerful blows to complete it and claim your reward.

You’ll come across Nephilim Vindicator during Chapter #11 of the game. The boss has a weakening effect that can debuff you to receive all the incoming damage. Aside from avoiding the debuff, you’ll also have to avoid the projectiles that the boss throws at you.

And you’ll also have to deal with ads spawning in the area. All the while, you’ll need to continue to damage the boss to kill it.

You encounter Slag Demon during Chapter #2. Since the fight is incredibly easy to control, you can go with either War or Strife. Ads will continue to spawn throughout the fight. Try to eliminate them to keep making Health Orbs. The following are the boss’s attacks:

Alongside avoiding these attacks, continue to attack the boss and you should complete it in no time.

The fight with Stormcaller starts at the end of Chapter #12. Immediately after the fight ensues, clear the arena of the ads first and then focus on the boss. Stormcaller has a couple of attacks at his disposal – the first one is a stun attack that is easy to dodge and the other one is another lightning attack. Once you’re done with the minions, focus on the boss and you should complete it.

These are all the bosses and tips to defeat them in Darksiders Genesis. For more on the game, check out our Arena Guide and Puzzles Solutions Guide.