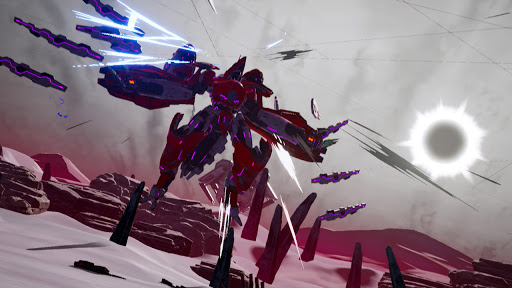 The battle with Zeruchroar is rather intense. Unlike the other immortals, he is relatively small and extremely maneuverable. He is basically just a giant arsenal with some insane firepower. This guide is meant to help you out in getting past the Boss Zeruchroar, in Daemon X Machina. We will also be sharing the details of the blueprint available at this level of the game.

How To Beat Zeruchroar In Daemon X Machina

The following is what you need to know about defeating Zeruchroar in Daemon X Machina:

The fight starts off with Zeruchroar in his first phase. He is heavily armored and he uses the majority of his move sets during this phase.

Zeruchroar has two weak points in this section. One is on his head which can only be seen from behind. And the other one protrudes from his behind like a tail. However, this spot is armored so you need to break it first to reach this core.

Moving on to his attacks in this phase he has several powerful ones. The first move consists of him launching flames from his arms while flailing around. If this hits you it will deal a fair amount of damage along with Burn status.

The next move is that he telegraphs his arms, and takes a massive swipe towards the targeted player. Similar to the previous move this one is also highly damaging and along with Acid status which will increase the level of damage even further.

The arsenal of Zeruchroar’s attack will obviously not be complete without a roar attack. His roar causes a shock wave. The closer you are to the boss at this time the greater damage you will receive. It also knocks you down on your back and causes Stun status. At times his roar can also be dealt like a channeled ability so it is able to cause you damage multiple times.

Occasionally during the fight, Zeruchroar would squat down and begin focusing his energy. This act is a prerequisite to missiles launching out of his back. Now they are not just any missiles: they are laser missiles. And as a result of being lasers, they cannot be shot down.

While fighting, if you are at a distance from Zeruchroar sometimes he will do a Leap Attack. This attack ends up with him dropping down on his targeted arsenal which causes considerable damage

The last of his attacks from phase one is the Moon Fall. This equal parts awesome and powerful ability of Zeruchroar’s cause a Moon fall event in which flaming rocks rain down on the battlefield from the sky. You can either dodge these or destroy them.

The second phase of the battle with Zeruchroar starts off with him taking a stance and letting out a roar which causes the same effects as mentioned previously. However, this time after a few seconds of casting his roar he rips off two of his arm-mounted pieces of armor and throws them to the ground. This move has its own pros and cons. His speed is increased but he is vulnerable to more damage now.

In the wake of Zeruchroar’s newly exposed status, two more weak points are uncovered that appear on occasions. Each of them are located on the sides of his arms.

Mostly the phase two attacks are same as the previous phase. All his moves remain the same but he can now move at a greater speed in order to avoid your attacks. A new ability that he does gain in this phase and applies periodically through the battle is the Femto Orb.

He creates a Femto Orb around his body which then expands to encompass the whole of the map. When you are inside this barrier your Femto energy will be drained out rapidly. Now to stop this you need to find Femto hot spot in one of the little bunkers dotted around the map. You can also prevent this move from by targeting and causing enough damage to Zeruchroar while he is casting it.

If he has succeeded in leaching out enough of your Femto he will start to glow a brighter purple on his decals than normal. This leads to him firing laser rockets whilst moving around. Although they are not seriously damaging they will bring down your health in bits while used along with his other attacks.

Zeruchroar can also use the energy cannon that the other immortals, namely Gunfort, Eclipse, Dreadnought and Dominator have. You need to be extra careful to avoid getting blasted by it.

There are some familiar mechanics that are at work during this battle with Zeruchroar. He is quite fond of destroying gun forts. As a result, there are many gun fort cannons littered around the map. You can use these to deal damage to him. They are best used when he is either doing a Roar attack, the spinning Fire attack or while he is casting the Femto Orb.

Another thing you can use to your advantage is his discarded armor. The pieces can be picked up and lobbed back at him. Although they cause a decent amount of damage you need to be careful while doing it as the attack is pretty slow and the range of the throw can be pretty deceptive.

The easiest strategy which you can use to destroy Zeruchroar is using sniper rifles. As most of his attacks are effective up close attacking him from a distance is a pretty good move. Stun Guns are the next best things to deal with him. Stunning him allows all the players to open fire on him and deal massive amounts of damage. You can also use an Acid weapon against him along with the Stun.

There are two versions of this fight. Each drops one of the armor sets. The first one drops the two weapons and the first armor set while the second one drops auxiliary part blueprints along with the second armor set.

The first set of blueprints is the ZeruchRot set. This is modeled after his Phase One form and is the bulkier of the two sets with increased resistance.

The next one is the Zeruchweiss set. It is a much faster and more maneuverable set representing the second phase of the Boss fight. Both these sets are pretty awesome and but it takes a while for a player to determine which one of them they find more useful through the gameplay depending on your strategy preferences.

Next in the blueprints is the shoulder-mounted laser rocket launcher. This weapon basically mirrors the attack of Zeruchroar and can cause high damage. But it has a Femto cost and a slower rate of fire in comparison to the Garuda.

There are also two small handheld laser cannons. They are similar to machine guns. Cause a good amount of damage and the fire rate is high. The downside is though that using them drains out your Femto pretty quickly.

The last of the blueprints is the Jagdflügel. It increases the Femto recovery rate of your arsenal and used with the weapons mentioned above can be pretty effective.

This concludes the complete guide of Boss Zeruchroar and blueprints of this level. That is all for our Daemon X Machina Zeruchroar guide. If you are interested in learning more about the game then you can check out our guide on how to get the HAW-X-BL99 Dainsleif. You can also check out our tips and tricks guide.