The Dreadnought is basically an enormous drilling machine and the first thing he always does when starting off the battle is immediatly dive under the ground.  He then releases the top plate of his body and starts firing missiles at you. Although this plate has no weak points all you need to do to destroy it is just target it down and blast it away.

Dreadnought is not a very tough boss to deal with so here we will lay a general outline of his attacks and weapons and how you can counter them. He will occasionally come out from the ground and then bombard you with all the missiles and guns he is equipped with. The main form of his attack is that he will charge at you across the arena, It is pretty easy to counter this move as he is a clear target in the wide open space of the arena and if you have long ranged weapons you can gain an upper hand. However, if you are hit by his charge it is extremely damaging so it’s best not spend a lot of time fighting on the ground.

Another one of Dreadnought’s moves is repeatedly diving below ground and then propelling himself out of the ground to fly across the arena. Being caught in this move can also be highly damaging. As the game progresses his damage level increases even further with his upgraded form. As previously it is recommended to dodge this attack as much as possible.

Now his last ability is that when he takes enough damage, Four will comment that a mortal fractal has been detected. When she says that it indicates the beginning of the second stage of the immortal’s fight pattern. At this point he starts attacking from his front cannon. 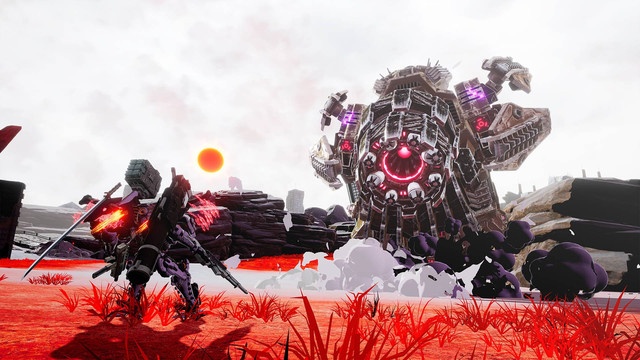 You can usually see a green beam where he is aiming and then he starts firing his massive front cannon. Again, being hit by this will damage you heavily. Simply dodge this attack by moving to the right or left. You can stun Dreadnought by damaging his cannon during this attack. This disables his digging for a while and keeps him stationary and above ground making him easier to target.

Fighting the Dreadnought is quite easy if you remember to keep moving and avoid being stationary as much as possible. You just need to keep him targeted with your most damaging weapons and the fight is won. His weak points are in several positions. In the center of his back, he has small quill like protuberances which are pretty vulnerable. The difficult weak points to target are around his front, in the lower part of his cannon.

You just need to shoot Dreadnought relentlessly while avoiding his attacks in order to win this fight. Recommended weapons to use against it are heavy lasers, machine guns, heavy rockets, bazookas or Deadly Drive, He is also not going to be able the long range hits of a sniper rifle.

Unlike some of the other immortals, all three iterations of Dreadnought (Regular, Alpha and Beta) have access to three different versions of basically the same gun. The first of them is OAW-CL43 Raider Force. It is laser cannon from the front of the Dreadnought. It is very powerful and unlike other laser cannons you do not need Femto to use it. So instead of burning through your Femto it burns through your stamina. Because of that it can be used in conjunction with other cannon mounted shoulder weapons or another laser cannon weapon.

The disadvantage of this weapon though is that will hinder your speed of movement due to its heftiness. Its movements are slow and it’s tough to aim as well. It is best to use it against huge targets like the immortals or other big and stationary enemies you face through the game.

The next weapons blueprint is of the OAW-R42 Lost Heart, It is a mid to long range assault rifle with a relatively slow rate of fire and not the best accuracy but it is an excellent weapon to be equipped within the PVE. It is not very effective though against other players.

That is all for our Daemon X Machina Dreadnought Boss guide.