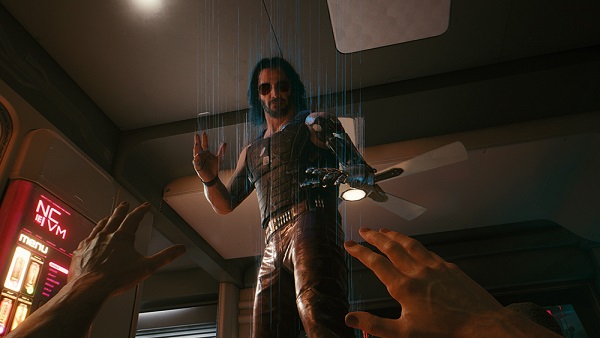 Note: Complete The Rescue to unlock this side job.

Outside Misty’s Esoterica, a man named Garry the Prophet is ranting about different conspiracy theories. Before you jump into the side job there are a few things you need to know:

Garry isn’t available between 5 and 10 AM. If you come during the morning and skip time, you may have to walk away from their area and come back to spawn him. Garry talks about 5 different conspiracy theories at random. You need to have listened to all five theories, and conversed with Garry each time, to trigger the next phase of the Prophet’s Song side job in Cyberpunk 2077.

After you discuss a topic with Garry he won’t bring it up again so it easy to converse about all five topics. The Vampire conspiracy theory is only available after you complete the “Playing for Time” main job.

To trigger two theories in a row you need to walk far enough from Garry in between each theory. A side job marker appears on your map to indicate the availability of the next step. During your conversations with him, no matter what dialogue option you choose the quest will progress.

During his 5th speech, which is always about the Nomads, Garry is attacked by the Nomads. Save Garry from the Nomads to trigger the final phase of The Prophet’s song side quest.

To sum it up, visit Garry on multiple occasions to witness all five speeches, and him from the Nomads. Each time make sure to take part in the conversation.

Once Garry puts on track for a mysterious meeting, go to Kabuki and speak with Johnny outside the marked factory before going to the hiding place. Wait and observe the Maelstromers giving a mysterious chip to the Corpos. To complete The Prophet’s Song you need to collect this mysterious chip. You can get the chip by attacking the gang members before the exchange or robbing the Corpos after the fact.

You can crack the chip from your inventory to reveal the hidden message. The chip can also be sold or you can keep it to question Garry at the usual spot. Keep in mind that Garry’s disciple will only answer your questions if you had made a sizeable donation early on.