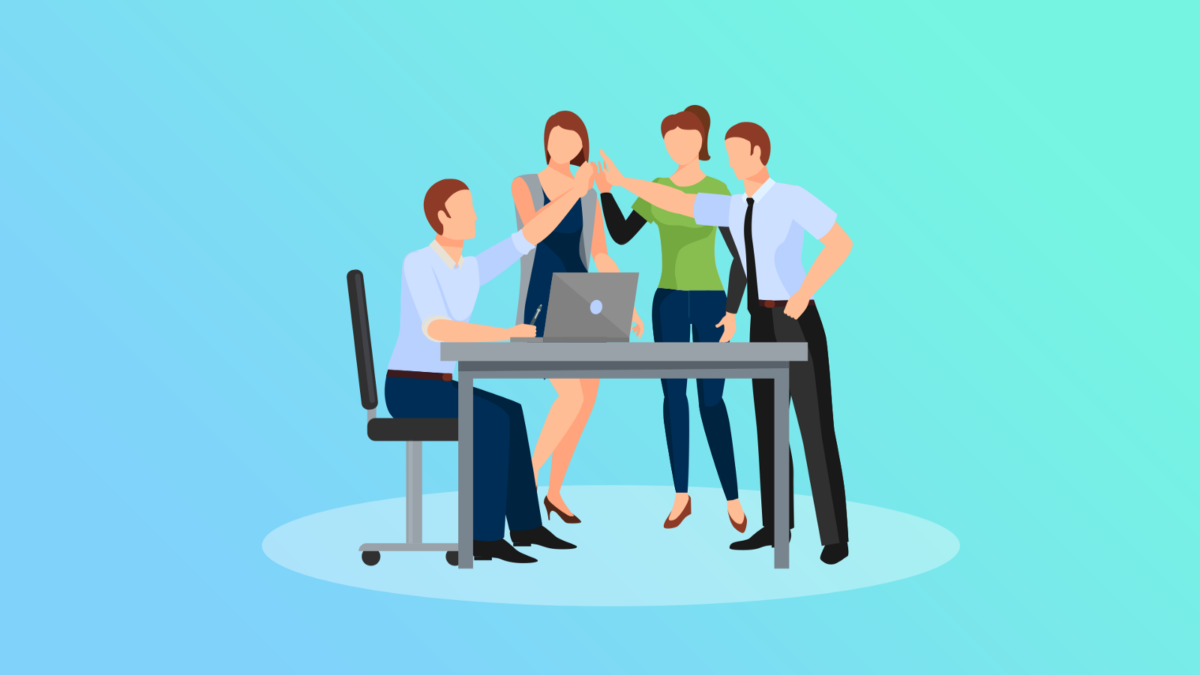 Over the past few weeks, I observed how the mainstream “gaming” media bashed Cyberpunk 2077. Websites, blogs, social media pretty much every platform was used to spread negativity. Cyberpunk 2077 is the biggest leap forward for inclusion, sexual and gender diversity. Yet the media branded the game racist and sexist. Cyberpunk 2077 lets you choose your gender. Cyberpunk 2077 lets you put female voice over male bodies yet no one is happy. No one is talking about how big of a leap this is for the LGBTQ community.

Since the CNET hit-piece on YouTubers the reputation of “gaming journalists” has never been lower. Currently, there is a clash between mainstream gaming media and YouTubers and CNET’s Ian Sherr took it to a new level. In his article, he manipulated the interview material, misrepresented facts, and operated under false pretenses. He went as far as attempting to spur advertisers from popular YouTubers whom he doesn’t agree with. The good news is that his article failed miserably and gamers saw right through it. His attempt to impact the livelihood of YouTubers ironically played a role in boosting revenue.

This made me wonder, if a “journalist” can create a hit-piece like this what else can he do? How far can these people go to attack something or someone? While I was thinking about this I came across a couple of investigative and speculative information. The information I saw, while it can be categorized as “conspiracy,” makes plenty of good points based on suggestive evidence and raises questions. I will link the sources below and highly recommend checking them out.

As an avid gamer being interested in articles related to video games comes naturally to me. I am lucky enough to have it as my bread and butter now. Often I come across articles with similar points of criticism for certain games, developers, and internet personalities. These articles are often published around the same time window on seemingly unconnected/unlinked websites. For example, one website would publish a negative article and soon after other seemingly unlinked websites would do the same.

One normally doesn’t pay attention to it. We don’t think much of it because multiple websites cover the same topics if it’s trending. But what if there is more to this? What if these articles have a hidden agenda? Would that be too crazy to think in today’s world? Especially, seeing how CNET laid the groundwork for months to ruin popular YouTubers?

After 5-years in the gaming industry as a writer, I understand the relative timeframe of written journalistic pieces. So it became clear to me that in some cases similar articles on different websites simply can not be a coincidence or simply following trending keywords and topics. It can take a couple of days to publish a proper journalistic piece and in some cases, it can take weeks and months. 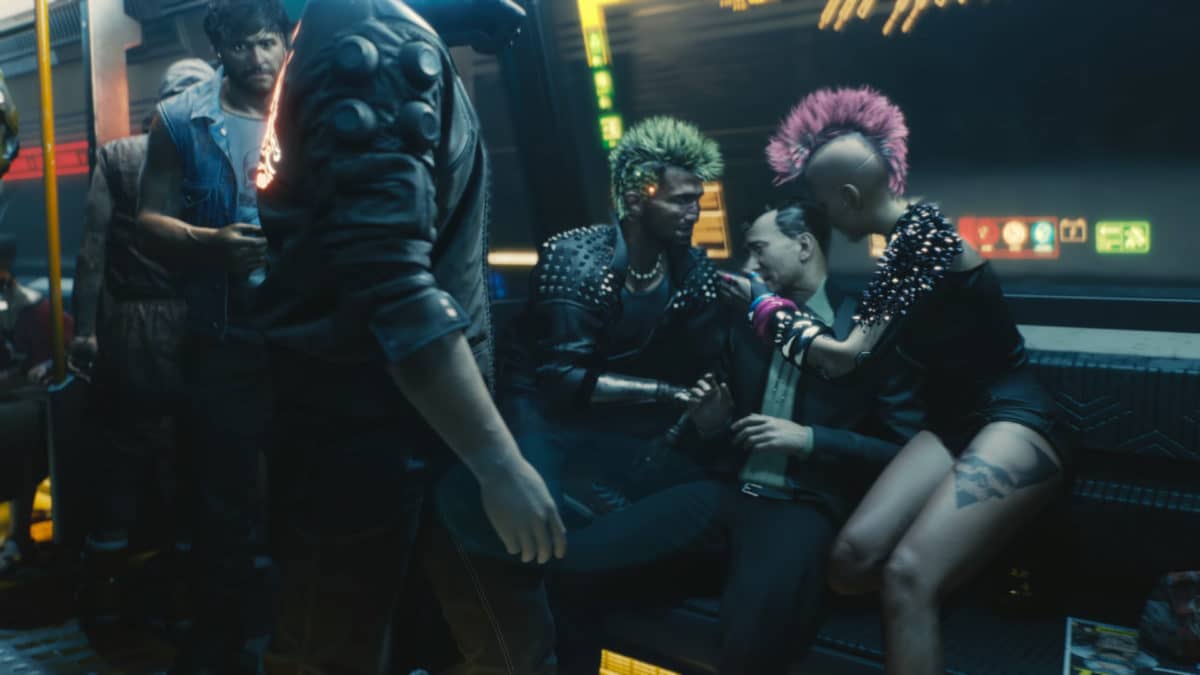 A YouTube video can be written, edited, and posted in a day but website content is a different story. Unless these writers see a trending article on another website and start writing with a similar message, have it instantly approved and published on the website, there must be some form of coordination between these websites.

To subsequently post similar articles with similar takes would require at least a modicum of communication between the authors.

In this day and age, website clicks are extremely valuable. And this is one of the reasons why outrage journalism is running wild.  Websites use emotional triggers in article headlines and social media posts to get people to engage. While it is fine to be outraged where need be. For example, in the case of Battlefront 2 predatory microtransactions or NBA 2K19 pushing unskippable ads.

But when outrage becomes the main goal, how far are writers willing to go? Agenda driven writing is killing journalistic integrity and ethics. Sadly, outrage for clicks is becoming all too common.

When certain writers have nothing unique to write about, they create outrage to generate traffic. Right now their target is Cyberpunk 2077 which has been at the receiving end of seemingly orchestrated negativity.

For example, some articles show concerns about the way people of color are represented in Cyberpunk 2077. Meanwhile, Mike Pondsmith (a black man) is heavily involved in the development of the game. But this fact is conveniently left out as it doesn’t fit the narrative. This is extremely relevant information that they leave out. But that’s not all they leave out.

More contextual information is missing such as the game is set in a messed up dystopian future, there is massive lore explaining the political situation of Night City and not even a bit of it is touched upon. Even if you are to come to the conclusion that Cyberpunk 2077 is racist and sexist, you need these details for better judgment.

The lackluster surface only coverage is a disservice to video game journalism and the readers. The white knight created backlash was so bad that Mike Pondsmith, the creator of the Cyberpunk universe had to comment and his statement says a lot.

Want to say this just once. I am really tired of well-meaning people on internet chat boards paternalistically telling me what I, as a black person, should be offended by. You want to be my ally? Go gird up your loins and at this year’s Thanksgiving dinner, have the nerve to tell your racist Uncle Bob to STFU for a change

White knights want to be offended for others even if those others aren’t offended. This is evident from a viral video of a black person showing his excitement for how his people are represented in the game.

Cyberpunk 2077 is the most racially diverse gender diverse game ever made. Plus is comments on the dangers of capitalism. Race, gender, and capitalism are the three things mainstream gaming websites complain most about. Yet here we are, Why? As it turns out, there is evidence to suggest that there is a conflict of interest that could be motivating negative press toward CD Projekt RED.

Cyberpunk 2077 is developed by CD Projekt RED, the company behind GOG.com. While GOG is no way near Steam, it is still preferred by many gamers due to its DRM free games and the general consumer-friendly practices of CD Projekt RED. GOG and Steam saw aggressive competition from Epic Games Store late last year. Epic Games offered millions to publishers for exclusive deals in an attempt to grab Steam’s market share. The aggressive attempts led to animosity between gamers and Epic Games Store.

Instead of improving its services and store features to offer a better product than Steam, Epic used Fortnite money to buy exclusives. PC gamers saw what Epic is trying to do and fought back. Be it Borderlands 3, Metro, or any other Epic Games exclusive, it saw massive backlash from the community. Shenmue 3 is the latest example as fans are not only demanding refunds but are planning a class action lawsuit against Ys Net.

A store that doesn’t even have a shopping cart is trying to strong-arm its way into the market.

While GOG isn’t the biggest store for PC gaming, things are looking great for the CD Projekt RED owned store. The company has partnered with Microsoft to create GOG Galaxy 2.0. The product is a universal app that brings all of your games and friends in one place. It connects Steam, GoG, and Microsft store to sync friends and games. It even supports uPlay, PlayStation Network, and Xbox Live.

Apart from Microsoft CD Projekt RED has Cyberpunk 2077 which could sell more copies on GOG than Steam. This has happened before with The Witcher 3 which sold more on GOG. This is a major achievement considering Steam was the only major PC games retailer in the world at the time.

How does that affect Epic Games and Steam? Less revenue from Cyberpunk 2077 sales. The situation is worse of Epic Games when the biggest RPG games of this generation come out. Steam and GOG are likely to generate the majority of sales revenue.

Epic Games is selling the game as well but GOG and CD Projekt RED are a threat to Tim Sweeney’s company. Now, how are the aforementioned news sites are relevant here? Well, each website can be linked and traced back to Epic Games. All of these entities are linked through financial interests.

Ted Leonsis is an executive board member of Axiomatic (Owner of Esports team Liquid). Back in October 2018, Axiomatic funded Epic Games as part of a $1.2B round of funding. The same Ted Leonsis has also invested in VOX Media, the parent company Polygon.

Next, we have Gamer Network, the company that owns Eurogamer, VG247, Rock Paper Shotgun. Gamer Network was purchased by ReedPop back in 2018. ReepPop is involved with LucasFilms to manage Star Wars Celebration. It is no secret that LucasFilm is owned by Disney but not many people know that Disney invested in Epic Games last year.

In 2018, Disney also invested in Ted Leonsis’ Axiomatic and we knew, Ted is linked to Polygon. The final piece of the puzzle is Mirriad, a company that specializes in delivering emotionally intelligent advertising through AI.

Mirriad signed a contract with Tencent, the biggest gaming company in the world. Tencent owns 40% of Epic Games and has two board of directors inside Epic. Mirriad also partnered with Univision Communications which until April 2019 owned Kotaku. While the connection between Mirriad and Kotaku no longer exists, it is fair to say all of the business connections, personal relationships, and communication still exist

All of these media companies are linked through financial interests which is easier to see here. 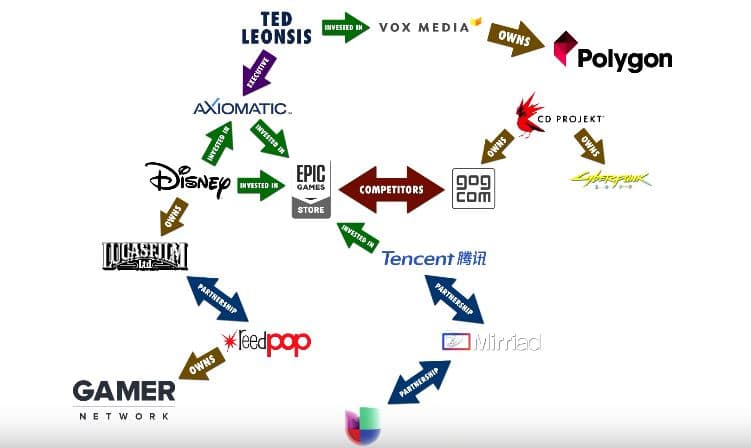 But this also shows there is more going on beneath the surface such ownership, relationships, friendships, investments, and financial trails. While this in no way proves Epic Games or any of its direct or indirect partners are trying to sabotage CD Projekt RED, all of this does raise questions. What are the real motivations behind words written on these websites? Are there more hit-pieces out there like the ones out of CNET? Is their criticism sparked by genuine concern or something else?

We will leave it up to you to decide.