RespawnFirst
Home Guides Switching to Valorant from CS: GO? Here’s Everything You Need to Know 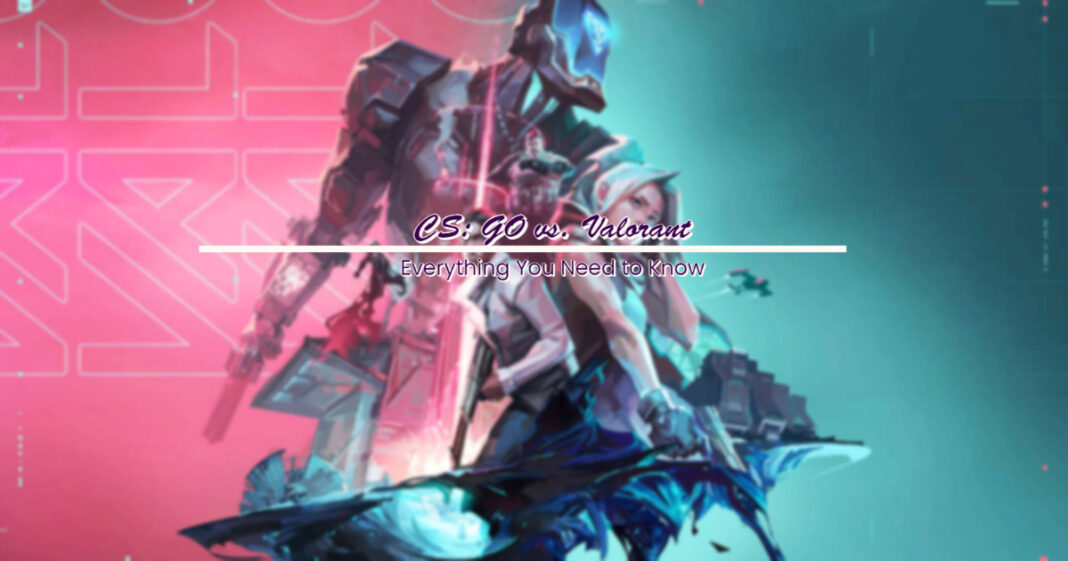 Counter-Strike has been on Steam for a very long time. Despite being a decade old, Counter-Strike: Global Offensive enjoys immense popularity, thanks to its incredible mechanics, map design, competitive scene, and a slew of other factors. And while there is no shortage of first-person shooters out there, not a lot of them come close to CS. One game, however, that has turned a lot of heads recently is none other than Valorant by Riot. If you are still on the fence about trying out Valorant and have a CS: GO background, this article will outline all the differences, and similarities between the 2 games to allow you to make an informed decision.

Shooting Mechanics
When Valorant was released, the shooting mechanics were clumsy as compared to Counter-Strike but it was to be expected of a newcomer in the world of FPS. For instance, Valorant’s Vandal is similar to AK-47 in CS: GO but with a very random spray pattern. This was, however, immediately addressed to make it more natural, kind of like AK-47. There are not a whole lot of differences when it comes to other weapons. Sniping in Valorant is also different as there is no quickscoping.

Weapons
Valorant offers a wide variety of weapons, which are:

Maps
As of right now, there are 8 maps in Valorant:

Aiming Differences
Aiming in both CS: GO and Valorant is identical. You can customize your crosshair, sensitivity, effective zoom, etc. Valorant, however, also uses Nvidia Reflex Technology to decrease the input delay.

Match Objectives
Like in Counter-Strike: Global Offensive, there are two sides: Attackers and Defenders.

Economy
Credits are used to buy weapons, armor, and special abilities. At the start of the match, each player starts with 800 Credits. Each kill will grant you 200 credits. If you win a round, you get 3,000 Credits in the next round. Attackers also get 300 Credits for planting the Spike. If you lose a round, you will get 1,900 Credits. The maximum Credit Limit of each player is capped at 9,000 Credits.

Competitive Matchmaking
Valorant also offers ranked matchmaking in which you have to play the first 20 matches to unlock your rank. There are 25 ranks in Valorant unlike CS: GO which has 18 ranks. These are:

Similar to CS: GO, you can also play unranked games which will not affect your rank. Valorant also has a shorter version known as Spike Rush.

Agents have two Normal Abilities and an Ultimate Ability. There is no concept of Agents in CS: GO and the only extra equipment that the players can use include Flash Bangs, Smoke Grenades, HE Grenades, Incendiary Grenades, Molotov, etc.

Anti-Cheat
The importance of a good anti-cheat cannot be undermined when it comes to a competitive FPS such as CS: GO or Valorant. Valve Anti Cheat or VAC is used in CS: GO is not nearly as effective as Valorant’s anti-cheat known as Vanguard. If someone is cheating in Valorant, they get a Machine ID ban. It means that he can no longer play Valorant on their PC. This results in far fewer issues in Valorant as compared to CS: GO.

Cosmetics
When it comes to cosmetics, both CS: GO and Valorant have a range of cosmetics that the players can use. CS: GO has a wide trading scene which Valorant lacks.

Conclusion
In conclusion, both games are outstanding FPS and are played widely everywhere in the world. CS’ online anti-cheat system is not that efficient which can be a bummer for a lot of players. Also, Valorant is still in its infancy and has a lot of room to grow.