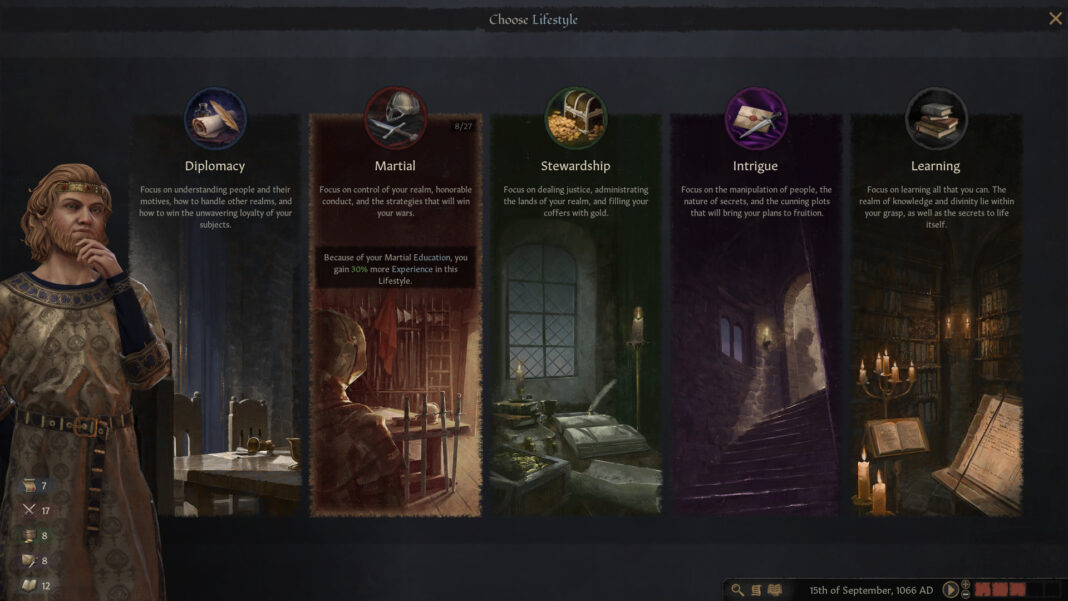 Skills in Crusader Kings 3 are going to decide a character’s expertise in various fields and combined with attributes they will determine how good or bad a character is at various tasks.

There are value thresholds in Crusader Kings 3 which aren’t as important as the exact value of a skill. Value Thresholds are taken into account in various events to determine the chances for a good or bad outcome. All of your skills are decided by Education traits and are affected by other trait types. The following are the value and descriptions.

Dread is an important part of skills and attributes in Crusader Kings 3. Dread will define how feared any ruler is by its vassals and make people Terrified or Intimidated. In Crusader Kings 3, Dread: Natural Dread and Decaying Dread.

This one can be added or remove via the character Traits and shows the minimum Dread any character.

Decaying Dread is layered on top of Natural Dread and is gained by taking part in performing cruel acts such as executing Prisoners and torture.

You will lose your character’s Dread at the rate of 0.5 per month. You can stop this by using the Forever Infamous intrigue lifestyle perk.

It should be noted that Concubines and Secondary Spouses are less fertile in Crusader Kings III. Moreover, mothers will lose 5% fertility at every childbirth so keep that into account.

Characters below the age of 16 are categorized as children in Crusader Kings 3. They become an adult at the age of 16 and can die at any point after the age of 60. Characters get various lifestyle perks at the start of their life cycle based on their age. At the age of 25 characters get a 7.5% chance of losing health each year. This chance goes up 2.2% every year. Dynasties can avoid this by completing the Kin Legacy. At the age of 45, characters have a 10% chance of losing -1 Prowess annually. This chance goes up by 1.5% every year. Complete the Kin Legacy to prevent this.

Stress is one of the most important attributes in Crusader Kings 3. It shows the mental health status of your characters. Stress levels of any character will go up if he/she performs an action that goes against its traits, someone passes away, or the character is tortured and imprisoned. Stress attribute ranges between 0 to 400 and comes with various penalties such as making your character vulnerable to break downs. The good thing is that such events can only happen once in 5 years so you have enough time to manage your stress levels.

As the name suggests, Health is your HP in Crusader Kings 3 among the list of attributes and traits. It shows who likely any character is to die in the game.