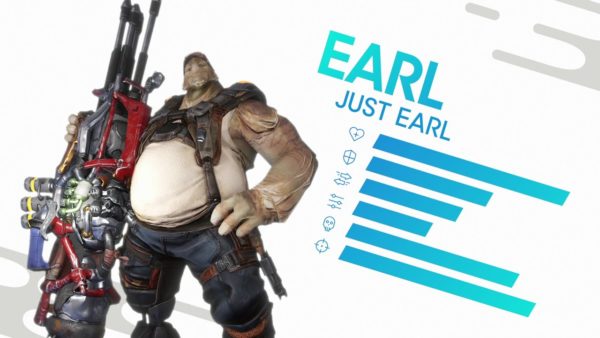 Earl is one of the hunters in Amazon Game Studios’ Crucible. He is a loveable giant who is friendlier than he looks. In this guide, we will discuss all Earl abilities, essence upgrades, and the upgrade tree you can through to make some improvements.

Earl is a big dude and was once a space trucker. His job was to carry cargo across the Orion Arm. He loved his job but things changed when he made a stop at the Crucible for a supply drop during an attack on Colony Zero. Earl joined the fight and helped rescue people on his ship, however, the rescue missions wrecked his ship and he’s been stranded on the Crucible ever since, trying to earn enough money to repair his ship.

Earl has 5 main abilities which are as follows.

Tanking Up: Drink a potion to restore HP.

Scatterblast Shot: Upshift AoE is increased by 50% and does 50% more damage as Dot.

Full Throttle: Afterburner has a knockback effect and stuns enemies.

Red-Line That Sucker: At max Turbofire; RoF goes up by 25% and projectile speed is increased by 33%. Enemies can’t block line of fire at max Turbofire.