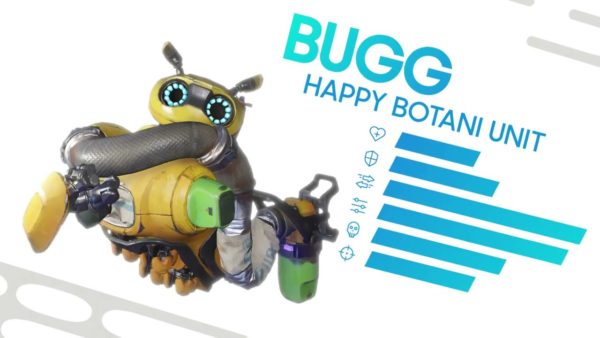 Bugg  is one of the 10 hunters in Amazon Game Studios’ Crucible. It is the cutest hunter of them all but rest assured, it might be cute, it is deadlier than it looks. Bugg has some great abilities that make it extremely effective in Crucible combat. Of course, you can use essence upgrades via the upgrade tree to make even more effective in Crucible.

According to the background we have, Bugg is actually the Botani Mark One unit. It was designed to be used in the Crucible which means no one is better suited for the game’s multiplayer modes. Back story reveals that  Scalzi-DokaniMo Corporation created a prototype as a test to see if such Androids are able to take over production and recovery of the most valuable resource, Essence. To perform the task faster, the company patched an experimental AI into a terraforming chassis. The end result became a friendly, cheerful robot that is meaner than the devil on the battlefield.

Bugg has five main abilities in Crucible which are the following.

Crop Dust: Creates an area of effect that slows and damages enemies beneath  Crop Dust.

Seed Pod: Shoots a Seed Pod that can be activated by spraying.

Shield Burst: Pretty much everyone gains an overshield (You, allies, and Seed Pods).

Thruster:  Get propelled forward and vertically.

Onboard Diagnostics: Medkits regenerate every 30 seconds. The upgrade also creates a healing area of effect for Bugg, its plants, and its allies.

Early Boomer: No need to water the Seed Pods to activate them.

High-Grade Bio-fuel: Get a Burt of speed when using Thrusters.

Booming Blossoms: Plants can now be watered until they are overcharged which stuns enemies nearby.

Tend and Protect: Shield Burst amount goes up by 50%.