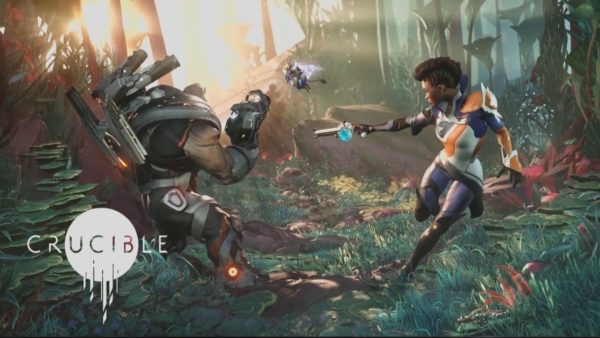 There are ten Hunters in Amazon’s Crucible and each comes with its own abilities. These abilities can then be further upgraded using something called the Essence. In this guide, we will discuss all of the Hunter abilities we can use in Amazon Game Studios’ Crucible.

Crucible Hunter Abilities and Their Effects

Aimed Fire: Increased damage and harpoon accuracy. Can slow down movement and enemies get a crit on a headshot.

Jamming Shroud: Deploy a device to block detection in the area. Tab the button again to make it self-destruct.

Squid Mine: Seeker mine and that explodes and slows down enemies.

Crop Dust: Create an area of effect that slows down and damages enemies.

Seed Pod: Shoot a Seed Pod that is triggered when spraying.

Shield Burst: Allies, seed pods, plants, and you get a temporary shield.

Thrusters: Get pushed forward and vertically.

Chop: Attack with the Vibron axe.

Enraged Claw: When Enraged Chop transforms into Enraged Claw, an attack that does healing overtime.

Enraged Roar: Become enraged and pick between a claw attack or a grab attack.

Tanking Up: Consume a drink to restore HP.

Supply Drop: Call in a medkit and bunker. Bunker will knock enemies back when it lands.

Heroic Bound: Power jump that can be charged by holding the jump button.

Laugh it Off: Get a shield that increases over time.

Scouting Ahead: Send Brother to a select location to spot enemies.

Shield of Justice:  Launch a projectile to shield allies. The projectiles can blind enemies along the way.

To the Rescue: Scout the area ahead with Brother and trigger the ability again to teleport to the Brother’s location.

Force Dome: Create a dome to block enemy attacks as well as their path.

Swing: Attack with the Sword.

Firepulse Thrusters: Allows you to jump up and down while generating heat.

Flamethrowers: Shoot a cone of flame.

Ignition Spark: A black that knocks back enemies and you.

Adhesive Alpha: Explosive compound that does damage and slows down enemies.

Blink: Teleport in the direction of movement.

Electro Cloud: Create a smoke cloud to block the enemy’s line of sight.

X-Ray Goggles: Detect enemies within 50m in front of you.

Need more help with the game? Check out the Crucible Wiki.