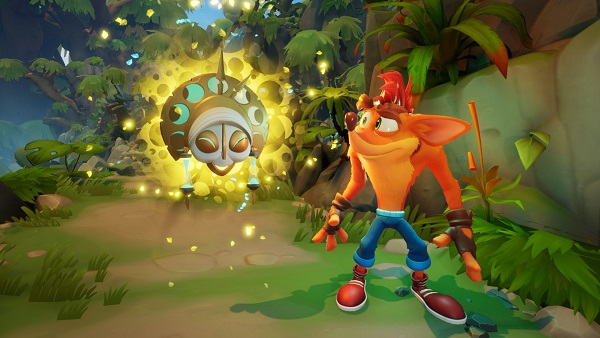 Before you start hunting for these Flashback Tapes, remember that they can also be found in the game’s main levels – don’t go on wasting your time looking for them in the Timeline and N. Verted levels.

Crash Compactor
The first Flashback Tape can be found at the very beginning of the Crash Compactor level. It’s very hard to miss this one.

Dino Dash
After you slide under a burning tree near the 6th checkpoint, you’ll find the collectible near an Aku Aku Crate.

Snow Way Out
After you go past the 4th checkpoint, you’ll come to an area with icy platforms suspended in water. This is where you’ll find the Flashback Tape on a stone platform – pretty simple to find.

Hit the Road
It’s near the entrance of the Bonus Level, immediately after the metal grate.

Booty Calls
Immediately after the 1st checkpoint, you’ll come to a cave. The tape is on the opposite end of a cannon in the cave area.

Jetboard Jetty
This one is also near the entrance of the Bonus Level, immediately after the initial Jetboard sequence – pretty easy to find.

Give it a Spin
Immediately after the 1st checkpoint, it should be on the wooden platform just before the first lilypad section.

Draggin’ On
About midway through the level, you’ll find it on an incline near 3 stone lions.

Off-balance
It’s in the area where the dragon starts spewing fire for the very first time.

Off Beat
You’ll find it immediately after the 2nd checkpoint – it should be on the right side, near a dumpster and a few Nitro boxes.

Run it Bayou
Near the very end of the level, stay on the top of the boat and you’ll see it atop a couple of TNT boxes.

Stay Frosty
Near the very end of the level, grab the Kupuna-Wa mask and find it on the other side of the water.

Bears Repeating
While you’re riding the bear, you’ll need to make a large jump – after a checkpoint – and find it on the right side.

Blast to the Past
You’ll find it during the side-scrolling section with lava spewing through the volcano.

Nitro Processing
You’ll find it near the very end of the level – immediately after the final water wheel.

Our guide to finding all the Flashback Tapes is still a work-in-progress. We’ll continue to update it in the coming days. Be sure to check back for an updated version.