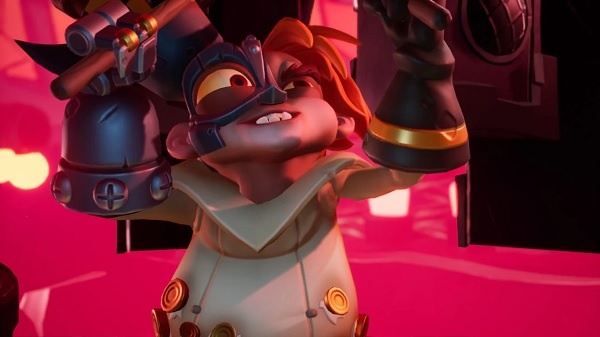 How To Beat Crash 4 Bosses

Crash Bandicoot 4 has a number of bosses like N. Gin, Louise, N. Brio, and more. Defeating each boss in the game requires a different strategy and that is where our Crash 4 Bosses Guide comes in to help you defeat every boss in the game. The following are the bosses that players will encounter in the game along with tips on how to beat them.

How To Beat N. Gin

When the N. Gin boss fight starts, players will be at end of a conveyor belt. Players need to hold their ground as enemies are launched at them. Attack these enemies to send them back and destroy the speaker in the background.

Once the speaker is destroyed, players will have a short window to hop up and attack N. Gin. After that, players will be on a bigger conveyer belt. This time green and red beats will be launched at the player. Players just need to avoid being hit by these beats. Jump over the green beats and duck under the red beats.

Again, players will be on a conveyer belt. Again, dodge the red and green beats and hit the enemies. Use the Lani-Loli mask and hit N. Gin.

After that, players will have to dodge the red and green beats again but this time, players have to use the small platforms. Enemeis will appear on the platforms. Get to them and spin attack them to send them flying to destroy the speaker. Despite the speaker and use the Lani-Loli mask to get to N. Gin and attack. After that, N. Gin will be defeated.

How To Defeat Louise

Of all the bosses in Crash 4, only Louise is the new one. Louise is a tentacled sea monster that players encounter at the end of the Jetboard Jetty level.

This boss fight is a bit different as players don’t have to attack Louise themselves but, ride the jet ski and lure the rats with swords riding barrels into her tentacles to deal damage.

While luring enemies into her tentacles, players need to also without for her tentacles as she slams them into the water. Players can get Louise to attack her own tentacle if she is attacking you with two tentacles.

Just keep riding the jet ski around and luring enemies into her. This will chip away her health slowly and will be defeated eventually.

How To Beat N. Brio

Dr. Nitrous Brio will be throwing potions at the player from a platform. When he throws pink potions, they’ll create a circle when they hit the ground that players need to avoid by jumping.

When N. Brio throws a green potion, it’ll turn into a blob monster. Just hit these blob monster and send them back at N. Brio to damage him.

Then he’ll throw two green potions that will turn into blob monsters. Again, hit them and send them back to damage N. Brio. He’ll then smash two potions together and things will go insane.

Then, N. Brio will drink a potion and will turn into a beast. Dodge his attacks and wait until N. Brio goes into a daze and then Akano mask will appear. Use the Dark Matter Spin attack to push him off the platform. Do this two more times and you’ll defeat N. Brio.

How To Beat Dr. Neo Cortex

As the boss fight starts, DR. Neo Cortex starts the battle with missiles. Dodge these missiles by running around until Punchbot Mark 2 is deployed. When the bot is dazed, use your spin attack.

After that, players need to dodge all obstacles and keep dodging until another Punchbot is deployed. Once it’s confused, spin the bot. Now, Dr. Neo Cortex will combine both of its attacks as players will have to dodge missiles along with the electric discs. Eventually, a third Punchbot will be deployed. Do the same with the bot that you did with the previous ones.

Then the platforms will slowly start to remove. Not only that, players also have to dodge missiles until Dr. Neo Cortex hits all the buttons at the same time. The tiles will start shaking and if you standing on one, quickly jump off of it.

Now players have a very small place to run around but, keep dodging missiles and the electric discs. Cortec will again deeply a Punchbot and players need to attack it to damage the boss and the fight is now done.

How To Defat Dr. N Tropy

In this boss fight, players fight both versions of N.Tropy at the same time in space. Also, the use of Kapuna-Wa is really important in this boss fight. While this phase is easy but, using Kapuna-Wa is the difficult part as it randomly slows the platform instead of the one that you are standing on.

At the end, players will come face-to-face with both versions of N.Tropy. Both of them will start chasing the player, and players need to use Ika Ika to change gravity, spin the yellow power sources along the way and do all of this while dodging blue energy balls.

When the players reach the end, the male N.Tropy version will start chasing the player. Players need to repeat the process but the difficulty is now increased. After that, players need to go back and the female version of the boss is still chasing them and they need to spin the final power source. Do that, and the N.Tropy will be defeated.

Players will again face Neo Cortex and this time he’ll take away the masks and use it himself against you. In the first phase of the Neo Cortex boss fight, players just need to jump three times on Shoot-O-Matics and destroy them.

Do that while dodging their yellow ring attacks and falling platforms. Then Cortex’s assistant will appear, players then need to use the spin attack and chip away the first health bar.

Now, Cotex will use Lani-Loli. Players need to jump from the phasing platforms and destroy Shoot-O-Matics. Again, Cortex’s assistant will appear. Use your spin attack and damage Cortex.

Then Neo Cortex will start using AnnihiLaser and start shooting beams at the player. Players just have to dodge the beams by jumping or going under them. After that, he’ll start using Ika-Ika maks and players need to dodge lasers while being upside down. Then destroy Shoot-O-Matics and spin the assistant to damage Cortex.

In the next phase, a lot of platforms will disappear and Kapuna-Wa will be part of the equation. Players need to start running to the right and make sure they stay on the platforms. While you are running, Cortex will be slowing down the time but, that won’t be much of a problem.

Destroy the Shoot-O-Matic on the left side when it appears and jump to the bottom left corner. Wait for the cycle to come around and jump on the turret in the top-right. Cortex’s assistant will appear again and spin him to damage Neo Cortex.

That is all for our Crash Bandicoot 4: It’s About Time Bosses Guide with tips on how to defeat the game’s bosses like Neo Cortex, Dr. N Tropy, Louise, and more. For more on the game, also see our How to Activate Retro Mode and How to Unlock Skins.