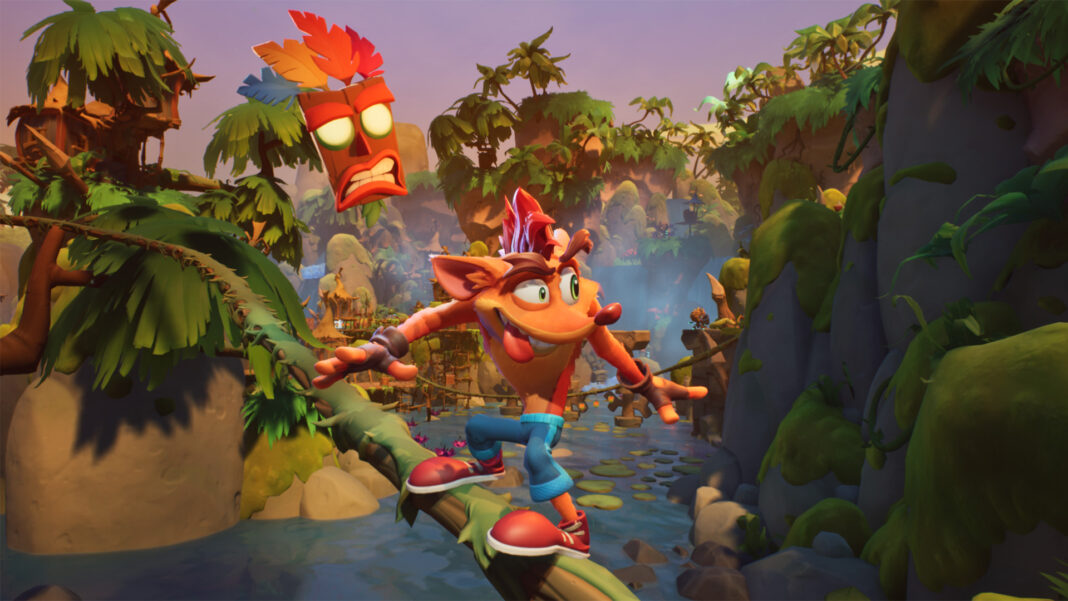 As I mentioned above, there are a total of four colored gems in the game for the players to collect. Collecting all four of them will unlock a door in the final world. Here are the locations for the Colored Gems in Crash Bandicoot 4.

This gem can be found in the second level of the game which is N. Sanity Peak. To find the Red Colored Gem, players need to pay attention to some hieroglyphics.

These arrows are telling you the pattern that players must follow in the next room. Follow the exact path mentioned in the hieroglyphics and the Red Gem will appear which players can collect.

Players will reach a safe area with a checkpoint after being chased by the mad max truck. There will be some trash cans surrounding Crash and one of them is on fire.

Collecting the Blue gem is the hardest of all four Colored Gems. Players need to complete the Draggin’ On without destroying a single box. Not only that, it has to be done in a single go.

Meaning players can’t even break the checkpoint box and If the players die at the end of the level, they will have to start from the beginning.

However, there is a way for the players to avoid playing the entire level if they accidentally break a box or die. Players can get into the bonus level and let Crash die immediately.

This will create a checkpoint for the players in the bonus room. Meaning, if the players break a box and die after that, they’ll start from the bonus level checkpoint. Just make sure that you don’ break the checkpoint box because you’ll have to start the level from the beginning.

Complete the level without breaking any box and the Blue gem will be yours.

Players will find the Yellow Gem in the Run It Bayou level. At the start of the level before jumping in the motorboard, players have to do a double jump on the platform to the left. Then bounce on the crates and jump on the onto the sliding platform. Here players will find crates stacked 2×2.

What To Do With the Colored Gems

In the Toxic Tunnels level, there is a large door with symbols for all four colored gems. If players come to this door without the gems, players will get a message to come back with the colored gems.

Now that you have the colored gems, the door will open. Players will complete some difficult platforming sections. Once players complete the platforming, they’ll get the Hidden gem for the Toxic Tunnels level.

That is all for our Crash Bandicoot 4: It’s About Time Colored Gems Locations Guide with tips on the colored gems locations and what they do. For more on the game, also see our How to Platinum and Flashback Tapes Locations Guide.