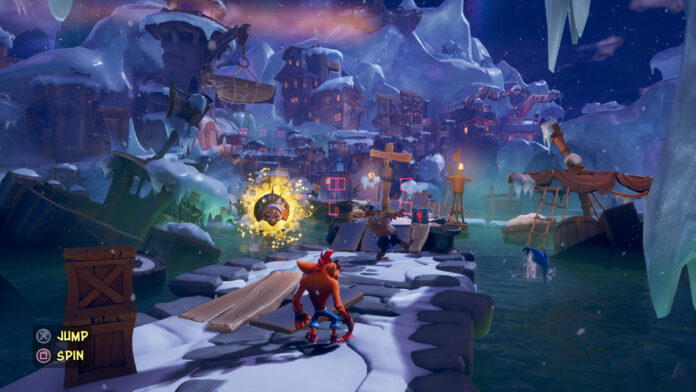 How to Play Multiplayer Co-op in Crash Bandicoot 4: It’s About Time

The co-op in Crash 4 is named “Pass and Play”. In pass and play, more than one player can play the main campaign by physically passing the controller to other players on their turn, just like in the 90s. A maximum of 4 players can play this mode together. To play Pass and Play:

You can also choose the number of players and pass condition from this menu. Pass Condition is the condition that is required to be fulfilled before passing the controller to another player.

You can set it to either “Checkpoint” or “Death”, so the players will have to switch after either reaching a checkpoint of when their character dies, respectively.

Everything will be tallied at the end of each level (to see who won the round) i.e. Wumpa Fruits, Boxes, and Number of Deaths. However, only the original player who set up the campaign will make progress.

How to Play Multiplayer

The competitive multiplayer in Crash 4 is also offline. A maximum of 4 players can play this mode in split-screen. Multiplayer Mode can be selected from the main menu, along with the type of game you want to play, i.e. Checkpoint Race or Crate Combo.

In “Crate Combo”, players break crates to score points between checkpoints. There’s also a score multiplier or a combo meter in the bottom right corner of your screen, which is directly proportional to your crate breaking streaks.

If you keep smashing crates consistently your score combo will blow the roof and if you slow down it will fall. The player to win most checkpoints is the final winner.