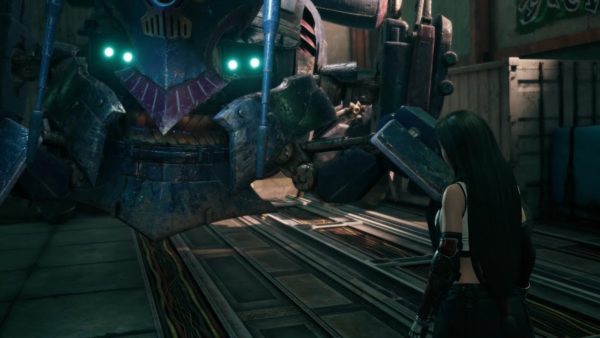 Our Final Fantasy 7 Remake guide will help you step-by-step on how to beat the Crab Warden as he is one of the toughest bosses in the game.

How To Beat Crab Warden

Players will encounter the Crab Warden at the end of Chapter 5 of FF7 Remake. This boss has multiple weak spots and you need to cripple every one of them in order to defeat it. Here is how to defeat the Crab Warden.

Crab Warden is weak to lightning magic so having Lightning Materia is recommended. Also, give an orb to Barret as he can support you from distance with his ranged attacks and spells.

As this Final Fantasy VII Remake boss fight starts, Crab warden will electrify the train tracks. Make sure Cloud and the party aren’t standing on the tracks. The boss will reuse this attack after a while so keep an eye on it.

Once the attack is over, have Cloud and Tifa use their melee attacks on Crab Warden’s legs. While they attack, use the Lightning Materia to reinforce their attacks with Lightning spells.

Since his most guns are on the front, try to attack his legs from the side and the back. However, be careful of the EMP are of effect attack as it’ll deal massive damage to your party.

Keep following this pattern until one of his legs is destroyed and the Crab Warden is staggered. Once staggered, use your ATB abilities to deal significant damage.

As you deal more and more damage, the boss will add more attacks to its pattern. Eventually, the Crab Warden will bring out its missiles launchers.

These missiles are difficult to dodge. So, if you aren’t sure that you can dodge the missiles then just block them to reduce the damage.

Keep using Lightning Spells as he is weak against lightning and focus on the missiles launchers as they are the biggest threat and destroy them as soon as possible.

Keep attacking the Crab Warden until he exposes his pilot generator. This is an exposed weak point and take full advantage of it by attacking it with everything you have and the boss will go down for good.

That is all for our Final Fantasy 7 Remake guide on how to beat the Crab Warden. For more on the game also see our Enemy Skills Locations Guide and Bridal Dresses Guide.