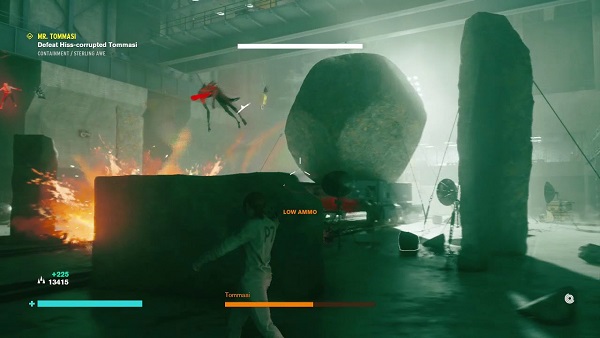 Control is a wacky supernatural experience and one of the main elements of the game is boss fights. These boss fights are well designed and interesting to play. You’ll come across these boss fights during main as well as side missions while exploring the bureau.

With the help of this guide, you’ll be able to learn everything you need to know about different bosses in Control and how to defeat these bosses with our helpful tips and tricks.

Hiss corrupted Tommasi is one of the toughest boss fights in Control. One of the reasons he is a tough boss to be is due to the limited number of weapons available in the game. Still, there are some powerful weapons you can use to take down this beast.

Hiss Tommasi stays afloat and keeps moving so he is a little tricky to aim at. Tommasi must be slain to progress to the Communications Depot.

As we said, there is a limited number of weapons in the game but there are indeed some powerful items you can use. One of the best weapons in Control is Pierce. Sadly, you won’t get access to this weapon until later on in the game.

The best way to deal with boss fights in Control is to be a little defensive. When you are facing this enemy you will see an area where you can crouch and sit.  Use this position to take down weaker enemies around you.

Anticipate his attack and then throw debris at him by using Jesse’s Launch ability. Throwing objects at him is going to cause a stun-effect which means he won’t be moving around. Start shooting when Tommasi is stunned.

Try to say in cover as much as possible. There is good cover in the circular area in the center of a big wall. Last but not least make sure you upgrade as many abilities as possible.

Defeating Anchor is all about patience, timing your evades perfectly and conserving your energy. After starting the fight, wait for Anchor to show its weak point, pick up a clock from the arena, and toss it in its mouth. This will cause it to a massive amount of damage.

You’ll also need to take care of smaller enemies that spawn in the area. Try to deal with them before you engage the boss. Continue to evade and hurl clocks at the boss’s core. It shouldn’t take you more 3-4 hits to down it.

This fight is less about your combat prowess and more about your levitation ability. If you’re good at it, you’ll finish it in no time.

esseJ is your mirror-reflection if you didn’t know and has three phases. During the first phase, try to stay close to her and continue to hurl things at her. If you’re low on energy, try to strafe a little, use your weapons, and let it recharge. The idea is to ramp up the aggression and don’t let her evade.

During the second phase, try to use your shield if she starts throwing things at you. Once she’s done, grab a large object and throw it at her. What you should really go for is not to give her any time to pick up things – start doing that first.

The final phase is identical to the first one except it’s in the air. So get up in the air, be aggressive, and you’ll beat her without any trouble.

The boss basically has two attacks: orbs and a tentacle attack. Both of these attacks are fairly easy to dodge. You can also shoot its orbs if you feel like it and it will also save you some energy to evade the tentacle attack. Former’s tentacle attack also create a hole where it lands so you must use levitate to a safe position.

By using levitation, you’ll remain safe from both the damage and falling into the ground. As for damaging the boss, you should try to grab the black boxes in the area as they deal a lot of damage to the boss.

Similar to the Anchor boss fight, this boss fight is also a test of your levitation ability so make sure you’re good at using it. Keep at it and you’ll beat it in no time.

In essence, this boss fight works exactly like the Former boss fight. All that you’re needed to do is to levitate around circles around Mold-1 and only get down if you see damaging spores erupting from the roof. You should also try to get these spores and toss them at the boss for an insane amount of damage. This fight will be over before you know it.