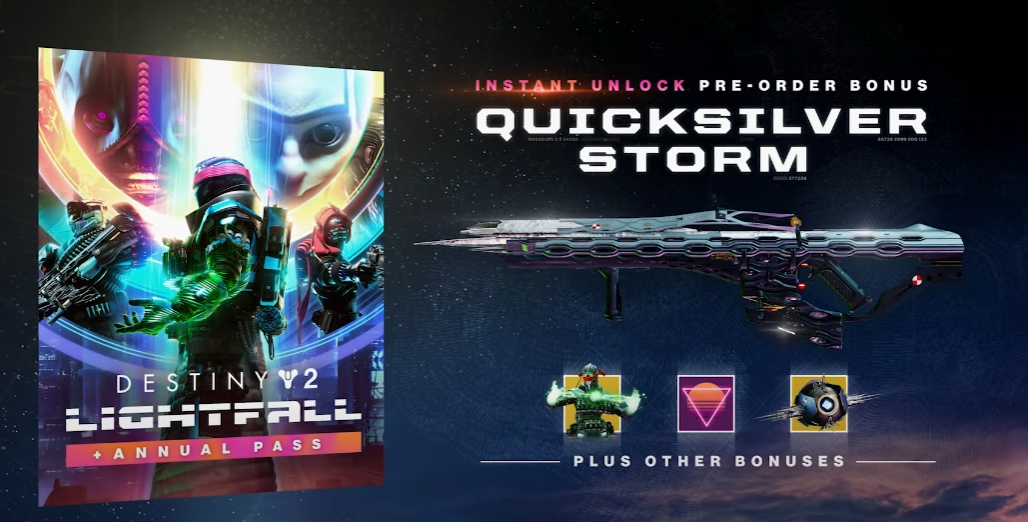 Destiny 2 Lightfall has been officially revealed and it released early next year. If you pre-order the game before February 28, 2023, you will instantly unlock the pre-order bonus for the expansion. In this Destiny 2 guide, we are going to go over how you can claim your Lightfall pre-order bonus.

The instant unlock pre-order bonus for buying the Destiny 2: Lightfall expansion includes the Quicksilver Storm exotic rifle, an exotic emote, an exotic ghost, and a legendary emblem. Once you have bought the expansion you can claim the bonuses from Cryptarch Master Rahool’s inventory at the Tower. If you are a new player then you will need to head over to Shaw Han in the Cosmodrome.

If you do not find your pre-order bonus then you might need to install the Lightfall items by managing the Destiny 2 add-ons. If you have bought the Collector’s Edition of the game then a code will be e-delivered to you in 24 hours after the purchase has been made. You can then proceed to redeem the game code as well as the pre-order pack.

Destiny 2 is now available on the Epic Games Store and the 30th-anniversary bundle is free there. Be sure to redeem that if you are new to the game. Bungie has also announced that all campaigns are free for the next week. So now would be a great time to jump back into the game if you have been on a break.

The Destiny 2 showcase was massive with a lot of announcements including crossovers with Fall Guys and Fortnite. The upcoming expansion is already the number one top seller on Steam at the time of writing. That is very impressive considering it was just announced and is months away from release.

This is how you can redeem the instant unlock Lightfall pre-order bonus in Destiny 2. If you are interested in learning more then you can check out our Destiny 2 guides hub.