Home Articles CDPR Crunch On Cyberpunk 2077 Is Not Crunch Culture? 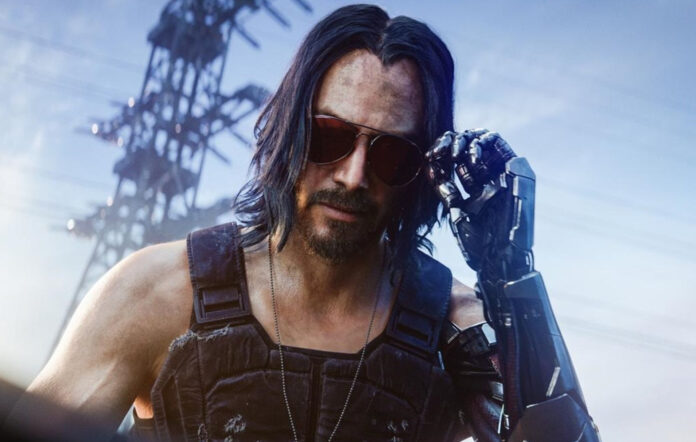 CD Projekt Red (CDPR) is a Polish studio that gained exceptional popularity because of its criticality acclaimed and quite successful Witcher series of video games, especially Witcher 3: The Wild Hunt. Apart from making great games, CDPR also owns and runs GOG online game store, promoting DRM-Free games, a practice still unlikely to be adopted by most major game publishers and developers. CDPR recently announced crunch for Cyberpunk 2077 but does the company have a crunch culture?

CDPR might be the only studio in recent years, which has always had wide acceptability by the customer base (core gaming communities). Their transparency with customers and their investors has become a benchmark for good business practices among game developers and publishers, often creating tight spots for such giants like EA, Ubisoft, and even Valve (Steam).

While CDPR had mainly gained popularity due to the Witcher franchise, the studio garnered even more hype for their upcoming new IP, Cyberpunk 2077. Cyberpunk 2077 was announced way back in 2012, and then for years, there was no news about it. CDPR had stuck to its popular slogan “it will be released when it is Ready”, and kept reassuring its loyal gaming community that it will be their most ambitious game and the wait will be worth it.

Witcher 3: The Wild Hunt, though released in 2015, is still considered a benchmark of quality among even the most recent releases, the hype for Cyberpunk 2077 had gone higher into unrealistic proportions without even a glimpse of gameplay. Although a cinematic teaser trailer was shown in 2013, an actual gameplay trailer was finally released in 2018 during Microsoft’s E3 conference. And even at that time, no release date was committed by CDPR.

Finally, at E3 2019, CDPR gave a release date of April 16, 2020. The game was later delayed to September 17, 2020 and then again to November 19, 2020. Quite recently though, Bloomberg reported, that although CDPR had promised that there would neither be any further delays nor a crunch period for their teams in order to meet the latest release date, they officially announced 6-days week till the release of Cyberpunk 2077 in order to meet the committed level of quality.

This news came with a strong backlash from journalists and critique alike, but is the backlash actually justified? In this article we discuss this Crunch of CDPR, and whether it will affect the already delayed release date or not.

Firstly, let’s just talk about the elephant in the room. The relationship between CDPR’s release dates and delays. We are not surprised with Cyberpunk 2077’s delays. We do not expect CDPR to announce a major title and then release it half-baked (We are looking at you Anthem and Ghost Recon Breakpoint).

CDPR is expected to release a product that is bug-free and complete by all means, and they have always delivered this promise albeit with some delays every now and then. 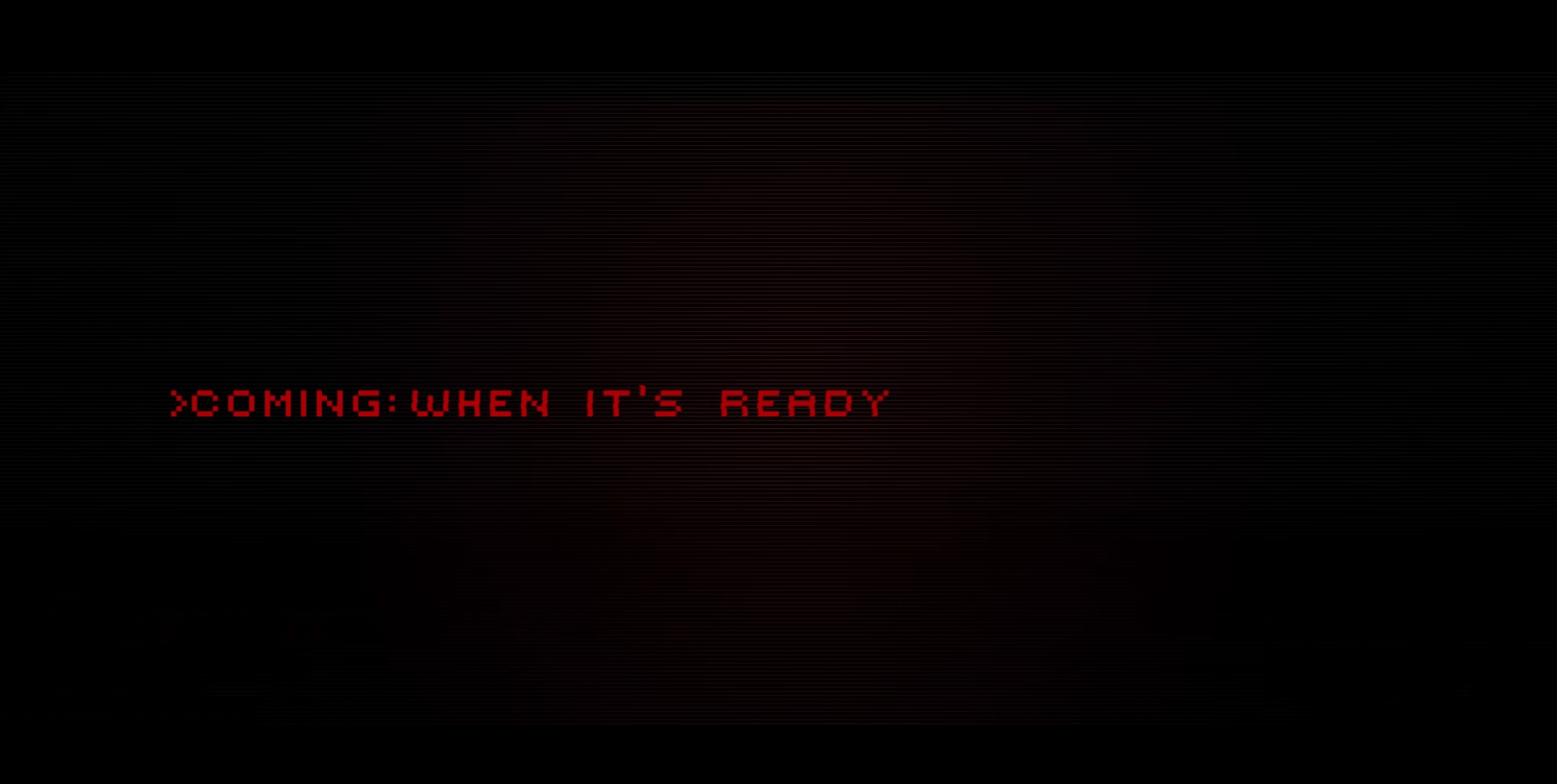 Witcher 3: The Wild Hunt was announced back in 2013, with an expected release window in the third quarter of 2014. It was then officially announced for February 2015. But it did not meet its February 24, 2015 release date and was pushed further without any date until April 2015, when CDPR announced that the game will be released on May 19, 2015.

It must be noted here that Witcher 3’s development was planned in 2008, but was officially initiated in 2011. Compare that to the actual release date and you will realize the level of commitment towards quality expressed by CDPR, uncompromised evidence.

Now if you compare Witcher 3 scenario with Cyberpunk 2077, you will realize that not much has changed, although this time around the factors pushing towards delay is quite a lot. We break them down one by one.

Delays, Next-Gen Gaming And The Curse Of Covid-19

Cyberpunk 2077 was scheduled to be released on April 16, 2020. It was the first date of release announced by CDPR, and honestly, we expected a delay of a few months even when this release date was announced in 2019.

Apart from CDPR’s usual behavior, another huge global change was the impact of the pandemic on literally every industry in the world, suffice to say, CDPR was not an exception and therefore “work-from-home” policy was also applied there as well, for the safety of employees and it definitely affected the overall business functions as no one was ready for this.

Therefore when the new release date of September 17, 2020 was announced, we were not really surprised. With pandemic on the loose, we expected such major releases to slow down, considering market trends worldwide. All big cinema films of this year were delayed (some have been pushed into 2021 now), and even Bungie had to push the release of their next Destiny Expansion to about two months. 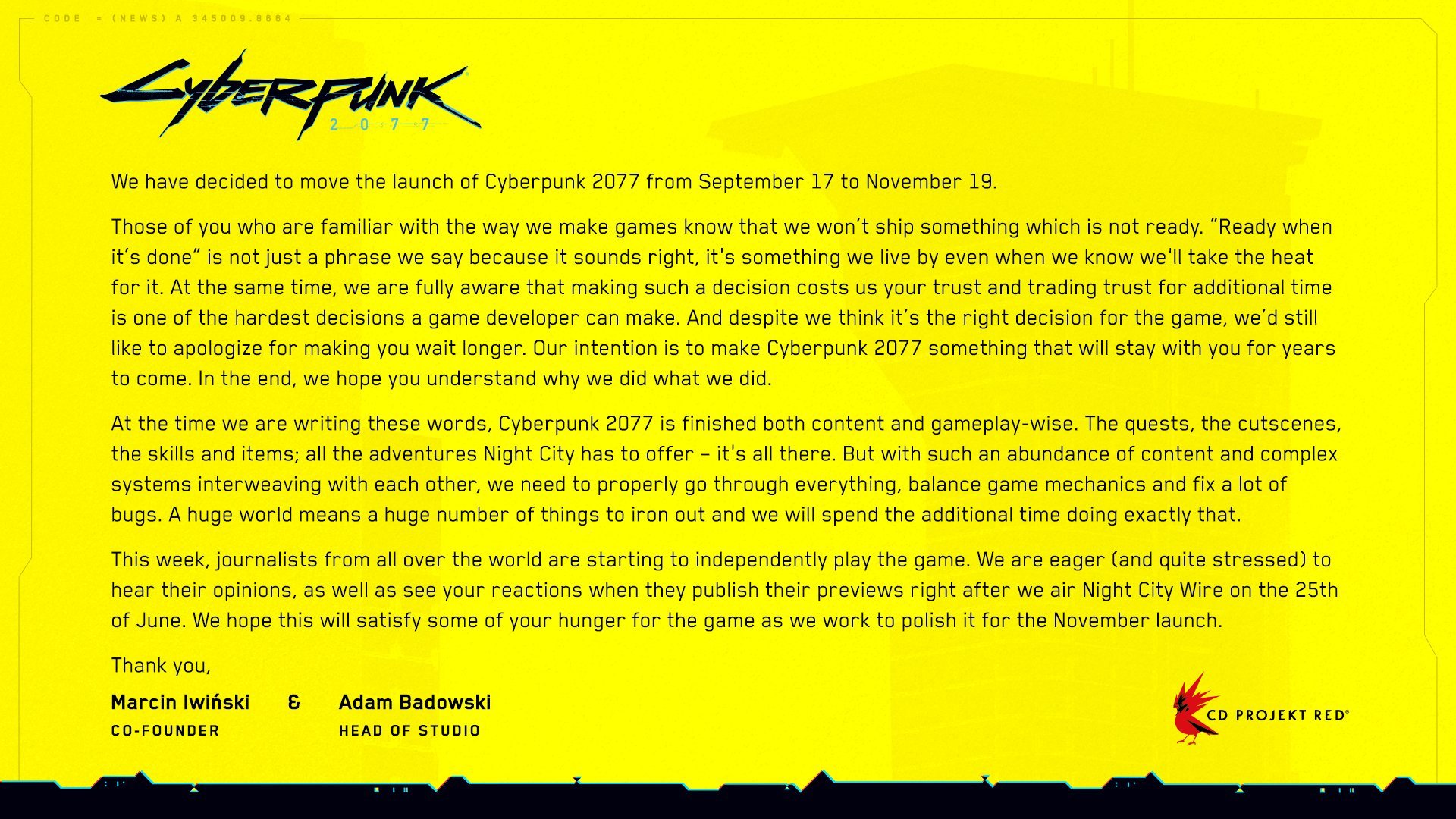 Hence, there was literally no surprise when another delay was announced and the new release date for Cyberpunk 2077 was confirmed to November 19, 2020; a significantly important date for the gaming community.

Apart from that, even Nvidia recently announced their new RTX 3000 series graphic cards, and as expected, Cyberpunk 2077 is being marketed as one of the major titles to use the full potential of the new and absolutely impressive RTX 3070, 3080 and 3090 graphic cards.

It is not hard to connect the dots from here. The release of next-generation consoles and new graphic cards, both promise a good number of sales for CDPR’s most gorgeous game to date, Cyberpunk 2077.

People would want to enjoy this game on their preferred platform, with the best visual and frames their money can buy (depending on your platform). Therefore the delay to November again made perfect sense for us game industry analysts.

The Crunch On Cyberpunk 2077

CDPR has a track record of releasing a complete game. Although no game can be perfect right from the launch and there are always patches to improve it further, CDPR games have still maintained quite a high level of quality, and people have always supported their decisions due to their transparent behavior with the general public.

But we cannot assume that CDPR would always make decisions driven towards their customers. Being a business entity with investors and stakeholders involved (this includes Nvidia, Microsoft, and Sony as well), CDPR has a huge chunk of various communities to satisfy, and not meeting the new deadline might affect not only Cyberpunk 2077’s sales (as people would invest on games which are immediately available for their new consoles) but also sales of next-generation consoles, as there is not much else happening during the last quarter of 2020, perhaps mostly due to pandemic.

Therefore when CDPR announced a crunch period of 6 days a week (Based on the Polish business model, it is mostly 5 days per week), we were rather surprised at the backlash by the community. It must be noted here that CDPR is not only going to pay overtime to the employees going through crunch but also has offered additional benefits based on sale numbers of Cyberpunk 2077.

CDPR CEO confirmed that 10% of the annual revenue of the company will be divided between the teams that are working on the game which is a massive bonus keeping in mind that Cyberpunk 2077 has been on the top-selling charts for months now, even though the game has not even released yet.

They are doing this for a limited period of time, to ensure they can meet the release date, otherwise, the financial impact of not meeting this latest release date will be much higher than what they have to pay to meet the crunch period.

One of the core reasons for dismay in this matter, however, is CDPR categorically committed that they will be able to avoid the Crunch Period this time, but they failed to keep up with that promise. Based on this fact, there are assumptions that the game might get delayed even further.

Based on the same logic, Witcher 3’s crunch time was applied during its final pre-release days, and CDPR was able to meet the final date eventually while assuring the quality of the product. Therefore, the current crunch time for Cyberpunk 2077 definitely bodes well for the committed release date, we believe it clearly expresses that CDPR will be able to meet this date without any further delays.

Inhumane Practice Vs Quality For The Customer

Over time, cutting holidays, and overloading employees is not something new to any industry. Organizations have gone above and beyond normal business practices in order to meet industry standards of quality, and unfortunately, many times failed at all ends. We, as customers, are worried about the well-being of employees of the video game industry, but we also deserve an uncompromised quality of video game when it is finally released.

The development hell of Anthem is a critical case study in this scenario. The game was released in February 2019, and even today it is promised to become what it was actually meant to be, but there is only a handful of customer base actually waiting for those changes, as most user base has moved on. CDPR of course does consider all these factors and wants to deliver as per customer expectations, although it is rather impossible to meet the hype.

CDPR is currently paying the price of the hype created by our expectations from them. So we would not blame them in their entirety for this crunch time, but we would expect their product to meet the minimum expectations and commitments, on the day of release without any further delay, if they are willing to pay such a high price through the hardship of their employees.

And let’s not forget, CDPR is one of the good names when it comes to industry best practices, pioneers of promoting greater value for customers and employees alike, and defining benchmarks for triple AAA gaming experience while pushing towards a DRM-Free gaming world. As the community is divided some would say that CDPR is getting a pass because the community loves the company. They have always been pro-gamer in their practices and have been transparent throughout the development of CP2077.

While we wrapped up this article, Cyberpunk 2077 has gone gold, which has exponentially decreased the chances of any further delays.

Let us know what you think about the crunch on Cyberpunk 2077 at CDPR and whether or not you think CDPR has a crunch culture issue.