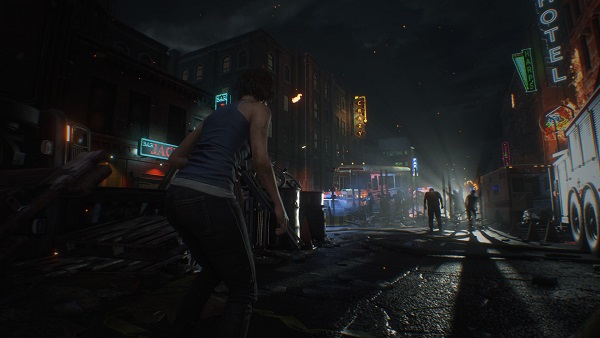 Resident Evil 3 Remake recreates the Raccoon City and it feels huge. There are more zombies lurking at every corner, streets are blocked by burning cars. The locations we’ll see are familiar yet different from what we remember. Fans of the original game will remember many of the locations but will notice richer details this time around.

Shops and apartments are full of 90s aesthetic touches. The original game’s fixed camera movement hid many of the limitations of that time but now, thanks to available hardware power and development techniques, Raccoon City feels expansive despite its linearity. Resident Evil 3 Remake gives players enough freedom to make the world feel bigger. Speaking with the Official Xbox Magazine, Peter Fabiano, the game’s producer said:

You can explore a lot more of Raccoon City this time. We have built it from the ground up, there is some reference here and there to the original, but it is Raccoon City reimagined. You can go into certain shops and see things you wouldn’t have been able to see before. It’s not an open-world game, don’t get me wrong, but you can explore a lot more.

Jill will be using the underground subway station to reach different parts of the city. Players will often backtrack to find clues and complete objectives. But around the corners lurks a more sinister threat, far greater than out average friendly neighborhood zombies. Yes, we are talking about Nemesis, the giant beast is far greater a threat than any other enemy you’ll encounter in Resident Evil 3 Remake’s Raccoon City. Capcom has discussed in detail how the studio revamped Nemesis.