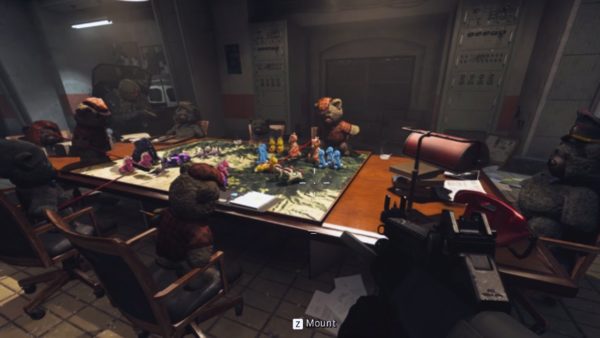 Those who managed to download the massive new update now have access to the Call of Duty Modern Warfare Season 4. In the new season, players get access to the Trench map and a secret bunker with an easter egg inside. In this guide, we will explain how to enter the secret bunker and get your hands on the teddy bear dual-wielding miniguns.

Easter eggs have been a part of Call of Duty for a long time but this is a first for Modern Warfare outside of Warzone battle royale map. There are a few steps you need to take unlock and enter the Trench map secret bunker in Call of Duty Modern Warfare. Inside the secret bunker, you will find a teddy bear who’s dual-wielding miniguns. You can perform the following steps to unlock the secret bunker. All of the steps can be performed in both custom as well as private games.

You need to use the keypad on the map and enter the right code to unlock the door. The codes are spread across the map and the first code is to the right side of the bunker while you face away from it. Use the right path and jump over the rocks and you will find the code engraved near your feet.

The second code is near the bunker door, right before the leftmost path you will find a grey barrel with the code engraved on it.

The next number is on the other side of the map from the bunker. Look inside the open brown crate, the third secret bunker code is inside the crate.

Go to the island in the middle of the trenches of the Trench map. Look for the concrete block that has a metal frame sticking out of its head. The fourth secret bunker code is on the side of the concrete bunker.

The final code needed to enter the secret bunker of the Trench map is under the wooden bridge. Go under the bridge and reach the middle, look up and there is the code.

Once you have all five of the codes for the secret bunker, head over to the keypad and shoot the numbers on the keypad to enter the codes. You will get access to the bunker after successfully entering the codes to the bunker keypad on the Trench Map. Go in and locate the red telephone on the middle deck. The telephone has five numbers on it which also go in the keypad so head back out. When “Access Granted” appears all steps are complete. Now go back inside to the phone which is now ringing. Answer the phone and the door at the back will start to open up. Once the door opens up a killer teddy bear with mini-guns will appear, even riot shields can’t hold his firepower.