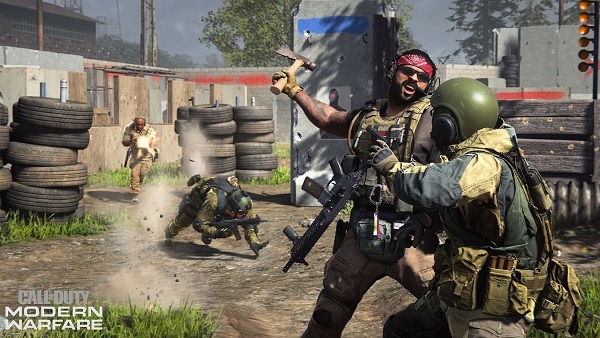 Loadouts are a set of classes that consists of a primary, secondary weapon, perks and grenades of any sort. Once you have reached Level 4 in Multiplayer you will unlock custom Loadouts and from that moment on you can create your loadouts. Obviously like there are best weapons out of all weapons there will be best loadouts out of loadouts. Today in this guide we will focus on all of the best loadouts in Call of Duty: Modern Warfare that you should at least try out once.

Making your loadout can be very advantageous because you can make the most overpowered loadout depending on your style. Even if you get bored with it you can make a new loadout and have fun with the new one. The following are the best loadouts in Call of Duty: Modern Warfare:

Now, this is the basic loadout that will help you almost all the time and if you grow fond of it you won’t need to change to any other. This loadout is not for players who camp or take high ground or whatever. It is mostly for those who are on the run and kill anyone in sight and If they die the respawn to do the same thing. It has M4A1 the most overpowered weapon in the gun so yes you need that of course.
1911 handgun can be pretty useful when you are engaged in combat and mag for primary weapon runs out. The tactical being a flash grenade can be very useful for ambushing camping players inside of a building. Just throw the flash inside and wreak havoc with your M4A1. Frag Grenades can be useful to clear players hiding behind walls or cars or even to kill a few players fighting amongst each other. The perks make the total loadout perfect as you will have high mobility, sense of where other players are and lethal are most handy.

I think just by reading the set classes you might have an idea of what this loadout is good for. Stealth is the key aspect of this loadout. Your primary weapon M4A1 or any other fast firing Assault Rifle will work as long as it has a Suppressor as an attachment on it. The .357 handgun will come in handy when the primary weapon’s mag runs out and even doesn’t make that much of a sound.
Instead of Lethals like grenades, you will need Throwing Knives as they don’t make much noise and can be used a mid-range effectively. The tactical can help in tracking the movement of the other players and so can the second perk. Upon killing enemies or taking points the first perk will kick in and regenerate you a bit which is necessary. Finally, the third perk will increase crouch speed and also help keep track of other players.

This loadout is called the Jack of All Trades and without a doubt, it is a very powerful loadout. You have two primary weapons including a machine gun so just imagine the destruction you can deal with. Claymore can be set up behind you or near you to alert you of enemy locations and most probably kill intervening enemies if they are on low health.
The flash grenade can be useful by tossing it inside of a building you know a player is camping and going in with the PKM and annihilating him. The Overkill perk lets you carry two primary weapons and High Alert gives you the location of enemies in a sense. Amped is very useful as PKM has long reloaded speed and the perk can reduce that.

This loadout is used as an Anti-Tank or Vehicle loadout. If you are tired of getting bullied by tanks and vehicles during combat then now is the time to act. Your primary weapon M4A1 will do it’s just job by keeping you alive against all odds and RPG-7 will be most effective against the tanks and other vehicles.
C4 can also be placed on tracks of the tanks and detonated to destroy them. Stim increases regeneration which is very useful as tanks do butt-load of damage. Double Time will increase mobility to move around to avoid shots from vehicles and Amped will help reload faster for the RPG as well.

This loadout is made as an Anti-Air loadout. If you are bothered by airplanes and simply shooting them down isn’t working then take this loadout. For the primary weapon, an AK-47 or LMG would do as your main item to use is the PILA launcher.

The primary weapons are there for surrounding players or final shots to the running away aircraft etc. The PILA launcher can deal a lot of damage and delays with the pesky aircraft problem.

Heartbeat Sensor is useful here to check whether players are around when you are hunting aircraft. Any Lethal would do as you can’t use any of them on aircraft so take some claymores or something to protect yourself from intruding players.

The first perk helps in avoiding the aircraft to target you and the second perk can hide you from trackers of UAVs etc. The third perk is to find enemies faster to get killstreaks quicker.

This is the end of our Call of Duty Modern Warfare Custom Loadout guide. If you need more help with the game check out errors and fixes,  Perks,  and Killstreaks.