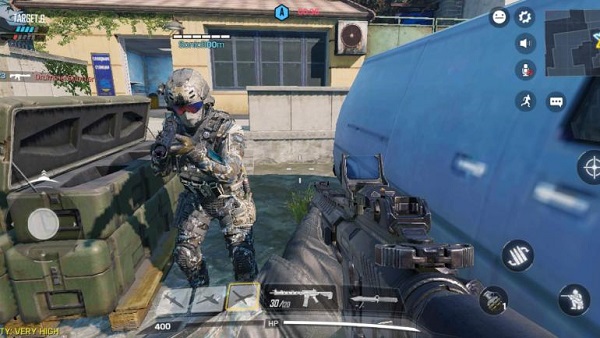 What FPS is complete without weapons? Keeping in line with the tradition set by mainstream COD games, Call of Duty Mobile features an impressive array of weapons – both primary and secondary. Our Call of Duty Mobile Weapons Guide will give you an overview of all the guns in COD Mobile, unlocking these weapons, upgrading them, weapons tier list that will help you learn about the best weapons, and some tips to secure more wins.

The game also allows you to level up and put various attachments on your weapons. Primary Weapons in COD Mobile include Assault Rifles, Snipers, SMGs, LMGs, and Shotguns. These will most likely be your weapons of choice in both the Multiplayer Mode and Battle Royale.

Secondary Weapons, on the other hand, include Pistols, Combat Knife, and Rocket Launchers. Also, feel free to consider a pistol as your Primary Weapon if you use it most of the time – there isn’t any hard and fast rule.

Lastly, do note that the unlock requirements for COD Mobile Weapons given below are for the game’s Multiplayer Mode only. All weapons in the Battle Royale mode are unlocked by default – you just need to find them.

Assault Rifles
Assault Rifles in Call of Duty Mobile are generally the most well-rounded weapons. These guns work well at almost all ranges and boast good enough fire rate. It doesn’t matter if you’re a new player or a veteran, you’ll feel right at home with an Assault Rifle in hand. The following are all the Assault Rifles in COD Mobile:

M4
It’s unlocked at Level 2. M4 is a fairly accurate AR in the game. Being the first AR you’ll unlock in the game, it’s damage output is a bit lackluster, but if you can land all your shots, you’ll start racking up a lot of kills.

AK-47
It’s unlocked at Level 23. AK-47 is the highest damage-dealing AR in COD Mobile. However, you’ll have to work with its high recoil, which can and will make it difficult to land all your shots. When using an ARK-47, try to fire in short bursts instead of going full-auto.

M16
It’s unlocked at Level 46. If you can’t seem to handle an AK-47, the M16 is your next best option. It packs almost the same amount of damage as an AK-47 but has slightly less range and fire rate. You should be able to do well with an M16 if AK-47 isn’t your cup of tea.

AK117
It’s unlocked at Level 60. AJ117 may not be the highest damage dealing AR in Call of Duty Mobile but it does boast a good rate of fire and accuracy. However, its range is another issue that you’ll have to deal with. Try to avoid picking it up in long-range maps and only use it in the likes of Nuketown, Killhouse, etc.

LK24
It’s unlocked at Level 74. LK24 is arguably the worst AR in the game. It lacks damage and doesn’t really provide anything to compensate for it. Unless you really like how LK24 feels and fires, there isn’t any incentive in picking it up.

Type 25
It’s unlocked at Level 104. Type 25 in Call of Duty Mobile has good damage, accuracy, and above-average fire rate. These attributes should allow you to mow down your foes as long as you consistently hit your shots.

BK57
It’s unlocked at Level 110. If you tried to stick with M4 and want something better without changing a whole lot, try to give BK57 a chance. It’s a pretty decent gun but at Level 110, you should’ve got a favorite already.

ASM 10
It’s unlocked at Level 138. If BK57 is a better version of M4, then ASM 10 is a worse version of AK-47. This weapon has literally nothing to justify its Level 138 unlock requirement. A lack of damage, range, and rate of fire are some of its downsides – at least, it’s got decent accuracy.

DL Q33
It’s unlocked by default. This bolt-action SR hits really hard and can kill in a one-shot to the head and two-shot to the body. Since it’s a bolt-action weapon, it struggles with a sluggish rate of fire. Try to practice a little with it to see how well you can do. Oh, and it has pretty decent hip-firing capabilities.

M21 EBR
It’s unlocked at Level 29. M21 EBR in Call of Duty: Mobile is arguably the best SR in the game. It doesn’t pack the punch of DL Q33 but it has a faster fire rate, meaning it’s a little more forgiving if you miss some of your shots.

XPR-50
It’s unlocked at Level 88. XPR-50 has the highest rate of fire of all Sniper Rifles in Call of Duty Mobile. On the downside, it lacks when it comes to its effective range and accuracy. Just try and stick to M21 EBR if you can.

Arctic .50
It’s unlocked at Level 67. If you like to quickscope a lot and always be on the move, you won’t be disappointed with the Arctic .50 SR. The sheer accuracy and mobility that this COD Mobile weapon comes packing with makes it worth the grind.

Weapons belonging to the SMGs category in Call of Duty Mobile are rarely outmatched by anything else at close-range. These guns boast incredible fire rate coupled with insane damage output. Their only drawbacks are their recoil pattern and a lack of range. Anything from an Assault Rifle to a Sniper will easily out-range SMGs. The following are all the Sub Machine Guns in Call of Duty Mobile:

AKS-74u
It’s unlocked at Level 7. AKS-74u is hands-down the best SMG in Call of Duty Mobile. It’s got everything from decent damage to accuracy and rate of fire. While it’s range leaves a bit to be desired, it’s still a really good SMG in the right hands.

MSMC
It’s unlocked at Level 33. MSMC sits on the other side of the road to AKS-74u. It’s got subpar damage, accuracy, and range. The only thing that it’s going on for it is its incredible rate of fire. That’s all!

HG 40
It’s unlocked at Level 40. HG 40 in Call of Duty Mobile is as close to an Assault Rifle as it’s possible to be. The weapon has the most range out of all SMGs in the game but lacks when it comes to the overall damage output and fire rate. If you’re an AR player and want to try a decent SMG, try to test this one.

PDW-57
It’s unlocked at Level 80. PDW-57 mows down foes at close-range. The weapon’s only drawback is its lack of range but as long as you’re playing at close-quarters, your enemies don’t stand a chance at contesting.

Chicom
It’s unlocked at Level 130. Chicom SMG in COD Mobile is of the few weapons that warrant the Level 130 unlock requirement. The weapon has crazy good damage, incredible range, and a decent rate of fire. Try it! You won’t be disappointed.

Weapons belonging to the LMGs category in Call of Duty Mobile can be considered a mix of ARs and SMGs with an insanely large magazine size thrown into the mix. These weapons have a high rate of fire of SMGs and a decent range of Assault Rifles, allowing you to kill an enemy from afar or at close-range.

However, LMGs don’t have the best accuracy. Even with the incredible range that LMGs have, they are very inaccurate and it’s hard to land all your shots where you want. On top of that, these guns also have an incredibly long reload times – if you’re ever caught reloading, you’ll most likely die.

RPD
It’s unlocked at Level 19. A pretty neat LMG overall. It’s got good range and equally good damage. What else you want?!

UL736
It’s unlocked at Level 115. UL736 is arguably the best LMG you can get your hands on in Call of Duty Mobile. Once you learn how to control its nasty recoil, you’ll keep on mowing down foe after foe without much effort.

S36
It’s unlocked at Level 136. I don’t know what to make of this weapon. Despite it being an LMG, it’s literally god-tier at close-range, especially when firing from the hip. You probably won’t hit a lot of shots from a long-range but try to take it in a close-quarters map and be surprised.

M4LMG
It’s unlocked at Level 150. If you really want to try an LMG but can’t gain a hold of their recoil patterns, try M4LMG. It’s really accurate. And that’s all it really is – accurate.

What Sniper Rifles are at long-range, Shotguns are at the close-range. At close-range, weapons belonging to this category will most likely knock you out in a couple of hits. The following are all the Shotguns in COD Mobile:

BY15
It’s unlocked at Level 15. BY15 is a pump-action shotgun that packs a mean punch and can rapidly fire two shots so that you aren’t made the victim of a sluggish rate of fire.

Striker
It’s unlocked at Level 52. If BY15 is a good shotgun by any standard, Striker is even better. This weapon can one-shot targets at close-range but has a really good rate of fire that lets you land a couple more if you missed the first time.

HS2126
It’s unlocked at Level 70. HS2126 has the highest rate of fire of any shotgun in Call of Duty Mobile. It also has a hidden perk that grants the wielder with increased movement speed with each kill. However, you need to be really close to an enemy to make it effective. This one lacks range, even for shotguns.

HS0405
It’s unlocked at Level 95. This weapon has insane damage potential and can one-shot everything in its path at CQC. However, if you miss that first shot, you’re more than likely to go down. Make each shot count, chief.

There are only two Pistols that you can use in Call of Duty Mobile. These are:

Similar to Pistols, there are only two Rocket Launchers that you can use in COD Mobile.
SMRs
It’s unlocked at Level 13.

With these many weapons in the game, it goes without saying that some ought to be better than the others. While the best weapon is always the one that you feel comfortable with, we’ve got a small weapons tier list that will help you identify which weapons are the best intrinsically:

Having AK-47 here is actually a no-brainer. The sheer amount of damage and fire rate that this weapon dishes out is unparalleled. Sure, you’ll have to work a little to get its recoil under control, but once you’ve got that down, you’ll be unstoppable. And if you can’t handle AK-47 for some reason, you’ve always got M16 in the back pocket.

If you like to snipe, you can’t go wrong with M21 EBR. The bolt-action SR can make quick work of anyone if you manage to land your shots. On the shotgun’s side, you’ve got Striker. A shotgun that not only has one-hit potential at close-range but also has an incredible rate of fire – a deadly combination.

When it comes to best SMGs in Call of Duty Mobile, you can’t go wrong with either AKS-47u or Chicom. Both of these SMGs pack a decent punch, have a good range, and an incredible rate of fire. Since you’ll be using them at close-range, you won’t even have to worry about controlling their recoil.

Finally, the only LMG in COD Mobile that I can recommend to you is none other than UL736. You can think of it as a larger, high clip version of AK-47 that slows you down a little. But if you want to crouch in the back and provide cover fire for your team, you can’t go wrong with this LMG.