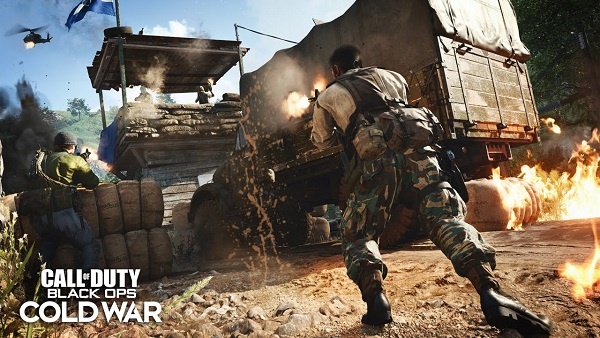 Like in any Call of Duty game, guns are important but so are Field Upgrades, Wildcards, and other pieces of equipment. A few of these things you’ll instantly recognize from Call of Duty: Modern Warfare (2019) but most of them are exclusive to the Black Ops series e.g. Wildcards. In this guide, we’ll walk you through everything you need to know about all the Tactical, Lethal, Field Upgrades, and Wildcards in Call of Duty: Black Ops Cold War.

Since the game is currently in beta, the guide isn’t complete as of right now. We’ll continue to add more items to the guide once the game officially launches in November.

Tactical Equipment in Cold War includes items that provide CC among other utilities such as healing, etc.

Stun Grenade
Unlocks at: Level 4
You’re able to slow enemies down and disrupt their aim.

Stimshot
Unlocks at: Level 6
You’re able to heal immediately after using it.

Smoke Grenade
Unlocks at: Level 17
It creates a smokescreen that impairs the vision of both allies and enemies.

Decoy
Unlocks at: Level 33
You’re able to recreate footstep sounds at the desired location to throw enemies off guard.

These items, as opposed to Tactical Equipment, provide raw damage and includes things like explosives.

Frag Grenade
Unlocks at: Level 4
A handheld grenade that can bounce off surfaces, cover large distances, and detonates after a while. You can cook it by holding the throw button.

C4
Unlocks at: Level 12
An explosive that can stick to different surfaces and can be remotely detonated. Remember that it can’t be thrown at very long distances.

Molotov
Unlocks at: Level 30
It can be thrown to explode on impact to create flames around an area. Enemies who pass through the flames will continuously take damage.

Semtex Grenade
Unlocks at: Level 39
A handheld grenade that can stick to surfaces and players before detonating.

Field Upgrades return from Call of Duty: Modern Warfare (2019) with a few changes. They can be pretty handy depending on the use. We definitely recommend Trophy System, Field Mic, and Jammer in the game’s multiplayer.

Proximity Mine
Unlocks at: Level 4
A small mine that detonates (after a delay) after an enemy/vehicle passes near it. You can avoid taking damage from it by going prone.

Field Mic
Unlocks at: Level 4
You’re able to deploy a small recording device that records enemy sounds in the nearby vicinity.

Trophy System
Unlocks at: Level 15
It can be deployed to destroy lethal equipment and other explosives thrown in its 10m radius.

Gas Mine
Unlocks at: Level 24
It gets triggers whenever an enemy walks over it. Once triggered, it releases a gas that damages and disorients nearby enemies.

Jammer
Unlocks at: Level 36
It disables all nearby Field Upgrades and mini-map.

Wildcards in the Call of Duty series are exclusive to Black Ops. These provide you with additional benefits such as unlocking additional attachment slots, equipping extra perks, etc.

Danger Close
Unlocks at: Level 4
You start the match with maximum ammo and an additional piece of lethal/tactical equipment.

Law Breaker
Unlocks at: Level 21
You’re able to equip any perk/weapons in any slot.

Gunfighter
Unlocks at: Level 27
This lets you unlock additional attachment slots for your weapons.

These are all the Lethal, Tactical, Wildcards, and Field Upgrades in Call of Duty: Black Ops Cold War. To learn more about the game, you can check out our detailed Call of Duty: Cold War wiki guides.