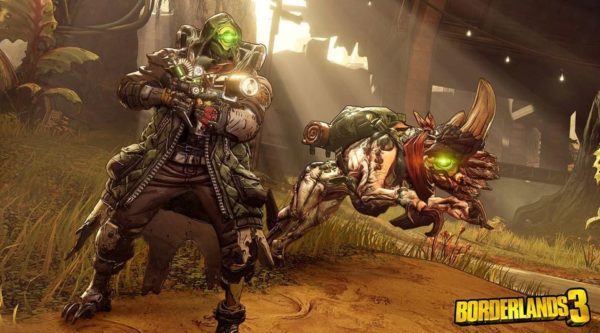 Borderlands 3 has launched for PC and consoles and critics are loving the game so far. Even though the Steam release of Borderlands 3 had a year but it still has a lot of errors and issues like Error Code LS-0013, crash at launch, no audio, black bars during cutscenes, unable to switch to DirectX 11 and more.

Players have reported that when they play Borderlands 3, the FPS is unreasonably low despite having recommended specs or above.

This is due to the low CPU usage by the game itself. Follow the instructions below to fix the low FPS and low CPU usage.

open Task Manager while the game is running and follow the following instructions.

This will resolve the low CPU usage and low FPS in Borderlands 3.

Borderlands 3 is facing some issues and crashes are one of them. Players are reporting the game either crashes randomly during gameplay. Here are a few fixes that might help you with Borderlands 3 crashes.

According to gamers, Borderlands 3 crashes randomly after playing it for 5-10 minutes. The reason behind these crashes could be that you are running the game in Windowed mode. Switch your display mode to fullscreen and the issue will resolve.

For some players, the game is crashing during the intro videos. The reason for the game to crash could be that you haven’t updated your BIOS. Update the BIOS and the crashes should stop.

If the game is still crashing then TURN OFF any sort of spatial audio/virtual 7.1 surround sound. For Windows 10, right-click on the audio icon in the bottom right corner. Hover the cursor over Spatial sound and select off.

Another way to do it by opening Settings > System > Sound. Click on “Sound Control Panel” to the right. Select your active audio device and click properties. Under the “spatial sound” tab select off from the drop-down menu and the issue will be resolved.

Another reason for these random crashes could be the thrid-party software like MSI Afterburner or GeForce Experience. Disable any third-party software you are using the Borderlands will stop crashing.

In case, you are using MSI Afterburner and disabling it hasn’t resolved anything. Follow the instructions below.

These fixes should resolve random crashes while playing Borderlands 3 on PC.

Another reason for the game to crash is probably your anti-virus software or Windows Defender detecting the game’s exe file as a Trojan virus.

To fix this, you either need to make an exception for the game’s exe file in your anti-virus software or disable it. This will resolve your crash at startup problem with Borderlands 3.

Also, if you are using a preview build of Windows 10 as part of the Windows Insider Program, then it might be the culprit for the crash at startup issue with Borderlands 3. Just leave the Insider Program and the game should run fine.

Go to the Steam folder and navigate to “Steam>Steamapps>common>Borderlands3>OakGame>Binaries>Win64”. Double-click on BL3.exe and if you get the “Application won’t start due to x3daudio1_7.dll is missing or “xapofx1_5.dll” error. Then just download and update DirectX and the issue will be resolved. Otherwise, you can just download the missing file from the internet and just place it in the folder where BL3.exe is located. The game will start working.

Players are reporting they get “Unable to initialize Steam API” error while starting Borderland 3. There are a couple of reasons behind this error and here are the fixes.

If you are using the old Steam library then it’s also one of the reasons behind this particular Borderlands 3 error. You just need to update Steam to the new library. Go the Steam’s install folder and delete the “Package” folder and “steam.cfg”. Start Steam and it’ll automatically update to the new library. This will resolve the error and you’ll be able to play the game.

Players are reporting that when they launch Borderlands from Steam the game doesn’t start and if they navigate to the game’s install folder and launch the game from there they get “AddDllDirectory could not be located in the dynamic link library kernel32.dll” error on Windows 7.

This can be fixed by installing the Windows 7 KB2533623 update. After installing the update open CMD, type “Run sfc /scannow” and press enter. Once the scan is complete, restart your PC and then you’ll b able to play Borderland 3.

Players have reported a couple of audio issues with Borderlands 3. Some are experiencing no audio while playing the game while some are facing the issue where the audio just breaks up during gameplay.

For the no audio issue in Borderlands 3, the culprit is actually the Spatial Sounds. Right-click on the audio icon on the bottom right of your Desktop. Disable Spatial sound if it’s set to “Windows Sonic for Headphones”.

As for the audio breaking up, it’s probably the audio quality setting in Windows that the game is unable to handle. Open the search bar and search for “Change System Sounds”.

Go to Playback Devices and select your active audio device and click on properties. Go to the advanced tab and select a lower value from the drop-down list compared to the current one. These fixes should resolve your audio issues with Borderlands 3.

According to players, when they launch Borderlands 3 on Steam they get the “Application won’t start due to x3daudio1_7.dll is missing or xapofx1_5.dll missing” Error. This can easily be fixed by updating DirectX.

Another fix for the error is just downloading the missing DLL file and just placing it in “Steam>Steamapps>common>Borderlands3>OakGame>Binaries>Win64”. This will resolve the issue and Borderlands 3 will become playable.

Steam players are reporting that they are getting “Video Driver was Crashed and Was Reset or recovered” while playing Borderlands 3. This error is most probabaly popping up due to an overclocked or an old GPU. Even if you have a factory overclocked GPU then use MSI Afterburner to revert the GPU back to its stock clocks and the error will be fixed.

Unable to Switch To DX 11

Players are reporting that when they switched to DirectX 12 while playing Borderlands 3, the game doesn’t launch at all. This can be fixed by switching to DirectX 11 but, they are unable to do it since the game won’t launch.

Both of these Borderlands 3 errors are stopping players from playing the game. But, there are fixes for both of these errors.

Right-click on the file, select properties and go to the compatibility tab. Uncheck the “Run this program as an administrator”, apply the changes and start the game and this error won’t bother you again.

As for the 88500000 Error, this pops up due to the Epic Games client not being updated. Update the client and the error will go away.

This issue is occurring for those players who are playing Borderlands 3 in Ultrawide displays. Just go to advanced video settings and disable “FidelityFX sharpening” and the black bars will go away.

Players are reporting that even on an RTX 2080Ti they are getting 100% CPU usage and 80+ degree temperature. This leads to Borderlands 3 crashing.

One possibility is that your GPU is overclocked. Just revert it back to its default clock speeds and the issue will be resolved.

However, If the GPU is not overclocked then this can be resolved by locking the game at 30 FPS. For that, you need the latest Nvidia GPU driver.

Open Nvidia Control Panel > Manage 3D Settings > Program Settings. Select the game from the drop-down menu and scroll through the options. You need to turn on “Max FPS Limit”, set it at 30 and apply the change. This will significantly reduce the GPU and CPU load. you’ll notice lower GPU usage and temperature.

Failed To Save Settings Fix

According to players, when they start the game “Failed To Save Settings” error pops up and no matter what they chose it won’t let them get past it and play the Borderlands 3.

According to players, when they start the game, it looks fine but after 5 mins the textures start to break up. Delete the Config file by going to “C:\Users\username\Documents\My Games\Borderlands 3\Saved” and the issue will be resolved.

Stuttering is a common issue in PC games and here are a few things that might help you boost the FPS and eliminate stuttering from Borderlands 3.

Start the game and disable in-game V.sync. This should eliminate stuttering in Borderlands 3.

If you are still facing stuttering or FPS drops then follow the steps above and set Vertical Sync to “Fast”. Again, disable in-game v.sync and display mode should be set at “Fullscreen”. This should fix the stuttering and give you an FPS boost if you have a moderate enough CPU and GPU.

That is all for our Borderlands 3 errors and fixes for low CPU usage, no audio, crashes and more. If you are interested in learning more about the game then you can check out our guide on how you can beat all the bosses in the game. You can also check out our Neon Arterial Crew Challenges Guide.