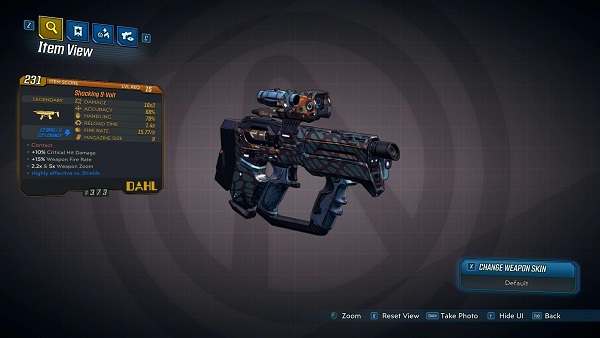 Legendary Weapons in Borderlands 3 are one of the strongest types of guns you’ll find in the game. They’re usually found as completely random drops while playing through the game and has far better stats, sometimes hilarious effects, and aesthetics of Gearbox’s proclaimed a billion guns in Borderlands 3. While the list seems to be nowhere near completion, these are some of the Borderlands Legendaries that we managed to uncover in BL3.

You might even recognize some of them from the livestream(s) Gearbox held a few months back. Enough talkin’. Let’s see what makes these Legendary Weapons in Borderlands 3 special!

This Legendary Weapons Guide shows all the Legendary Weapons that have been discovered thus far. Since BL3 has no lack of weaponry, we’re sure to come across more Legendaries. We’ll continue to add more weapons to this list. The weapons’ Red Text is given directly underneath the weapon’s name followed by its special effects.

Warlord
My gun sings for your blood.
You’ve a 30% chance to not consume ammo.

Cutsman
To be updated
+20% weapon charge speed and consumes two ammo per shot. +40% melee damage and a 5.0x weapon zoom.

Ten Gallon
Let me tell you about my best friend.
Reloading deploys a drone that shoots at enemies and explodes on impact.

Destructo Spinner
To be updated
37 damage per second. Can switch between shock and fire element.

Breath of the Dying

Breeder
To be updated
This weapon has +101 splash damage radius. The pistol has 1.5x zoom

The Handsome Jackhammer
Everyone thinks they are the heroes of their own stories.
You’ve the Tediore-style reload.

Cloud Kill
Oh, noo she ded.
The weapon has a high rate of fire and creates a cloud that damages enemies.

Headsplosion
To be Updated.
Shots explode on impact and Critical Hits ricochet off enemies.

The Monocle
One is enough.
This bolt-action weapon has high accuracy.

The Soleki Protocol
To be Updated.
This weapon charges and splits projectiles to hit multiple enemies.

Hyperfocus XZ41
xzx.
Damage done to you is reflected back at the attackers.

Asmd
To be Updated.
The weapon fires energy shots/orbs that can be popped for AOE.

Conference Call
Let’s just ping everyone all at once.
The weapon spawns more projectiles that hit multiple enemies at the same time.

Sledge’s Shotgun
The Legend Lives (still).
This weapon has high magazine size, fires in bursts, and is double-barrel that staggers enemies.

The Butcher
Fresh Meat!
The weapon has increased rate of fire and a chance of not consuming the ammo.

Polybius
To be Updated.
Your bullets’ spread forms a square and reload deploys a crab.

The Boring Gun
To be Updated.
The weapon shoots grounded sawblades that dig in fired direction.

Sawbar
To be Updated.
Unlimited magazine but can overheat. Has a 1.8x weapon zoom.

Nimble Jack
Jack be nimble, Jack be quick, Jack jump and kill lunatics.
The weapon has tight spread while jumping.

The Horizon
You can’t leave, she won’t let you.
The weapon has high accuracy, damage, and can also fire explosive rounds on reload.

The Flood
To be Updated.
+15% reload speed

Brainstormer
Let’s put our heads together.
The weapon has a vertical row spread.

The Hellwalker
So, my demons. Your time has come.
The weapon plays guitar riff on pickup & every shot.

Mongol
Man is a horde animal.
The weapon fires energy orbs that deal damage to enemies.

The Dictator
Suppress all who oppose you.
The weapon fires horizontal bullets with an increased rate of fire.

Embrace the Pain
It hurts, HAHAHAHAHA! IT HURTS!!
Unlimited magazine space. Can overheat and break

Bearcat
I love the smell of popcorn in the morning.
The weapon fires a horizontal row of grenade projectiles.

Pain Is Power
Nobody kills me but ME!
This weapon damages player when fired.

Gatlin’ Gatling Gun
Watch me crank it, watch me roll.
This weapon has a high fire rate and has hand-cranking animation when firing.

Laser-Sploder
LASERS != EXPLOSIONS!?
This weapon fires a beam of elemental damage and rockets.

Infinity
It’s closer than you think! (No, it isn’t).
This weapon has infinite ammo.

Unforgiven
It’s a helluva thing…
The weapon has a high Critical Damage bonus.

Wagon Wheel
Keep them doggies rollin’.
Projectiles from this weapon ricochet off objects and split into multiple projectiles.

Nemesis
A righteous infliction of retribution.
The weapon has different firing modes.

Hazardous Sellout
Hey there, superfan!
The weapon has quick laser that explodes as an orb on impact.

Rebel Yell
When you charge, yell like Furies.
The weapon’s increased rate of fire can deplete enemy shields quickly.

Hand of Glory
By one, by two, by three!
The weapon can fire quick bursts of fire in quick succession.

Lead Sprinkler
A sprinkle of projectile encouragement.
The projectiles from the weapon turn into explosive shots upon impact.

Faisor
Set Faisors to kill.
The weapon is a full-auto shotgun.

Firesale Long Musket++
Say “cryptocurrency”!
The weapon is a small flamethrower which you can throw away to reload.

Westergun
I believe ya, but my tommy gun don’t.
The weapon has a short charge time to shoot Cryo/Corrosive pellets that also has increased AOE effect.

Mocking Tsunami
You can’t explain that.
The weapon fires different elemental effects in a 5-bullet line.

Krakatoa
Get him angry and he’s bound to erupt.

Malak’s Bane
Welcome to the end.
You can turn this sniper rifle into a shotgun that shoots flaming rounds.

Woodblocker
You don’t get into woodblocks unless you are ready to f%*k.
The sniper rifle shoot a 4-round irradiated shot.

Stuffed Tunguska
Crack the Skye.
The rocket launcher launches itself and catches targets in an explosion.

This marks the end of our Borderlands 3 Legendary Weapons Guide. If you’re interested in learning more about the game, then check out our FL4K Builds, Amara Builds, and Artifacts Guide.