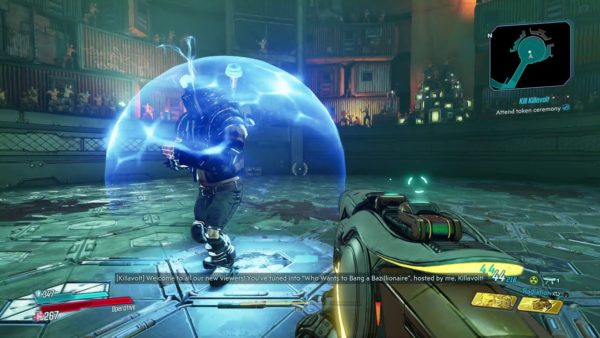 Killavolt boss is one of the hardest bosses in Borderlands 3. The boss is located in Lectra City. He will appear in the side mission kill killavolt. This guide will include all the tips and details on how to defeat this formidable boss.

How to Beat Killavolt Boss In Borderlands 3

Despite being a side mission boss this boss is pretty hard to deal with. The main tips here are to keep moving and stay as far away from Borderlands 3’s killavolt as you can. Keeping your distance has many advantages firstly you won’t get that kick in the face which does huge damage. Keep moving around the area and jump to avoid his attack when the floor becomes electrified. Dodging his electric shots are easy if you pay attention to him all the time.

Try to shoot killavolt in places where you will get critical damage. Shoot him in the back and in his private parts and you will get the most damage. Try throwing grenades at him from afar to do good damage as well. There are chests in the area which contain health. Save these for later when you really need them.

There are 4 stages in the fight and each more terrifying and lengthy than the last. The first section of the fight starts when you enter The Bone Zone. Electricity will come from above and hit the yellow tiles on the ground. Jump to avoid electricity and stay away from yellow tiles. Deal damage to him while staying him. As I mentioned above shooting him in the back can lead to critical damage. From time to time killavolt will raise hi arms indicating he is about to attack.

Dodging his attacks can be easy if you pay attention to him. Don’t needlessly attack so that he gets a chance to attack you. The yellow tiles will soon be electrified avoid those. More electricity will rain from above and upon dealing some damage to him he will go full berserker and charge at you. Dodging that is easy too and you can attack his back afterward. After a few more of this, the second section will begin.

In the second section he will disappear and small enemies for you to deal with. After some time he will arrive and you will have to take care of him again. The attack pattern will mostly be the same. The third section is a true pain. He will electrify the whole area and you can run or jump avoiding some and not taking a lot of damage. Use that health now! He will spawn more enemies and charge at you more. Finish his blue bar again to get to the last section.

In the last section, Killavolt will have a shield around him and you will have dodge the electrified tiles more. He will electrify all tiles in one move which is hard to dodge but can be dodged a little so that you don’t take much damage. He will spawn enemies and throw a big electricity ball at you. Avoid and press by attacking him a lot. Just whittle down his last health bar and this boss will fall in no time.

This is the end of our Borderlands 3 Killavolt Boss guide. If you need more help with the game check out our how to get the best weapons, side quests, and Atlas HQ Challenges guide.