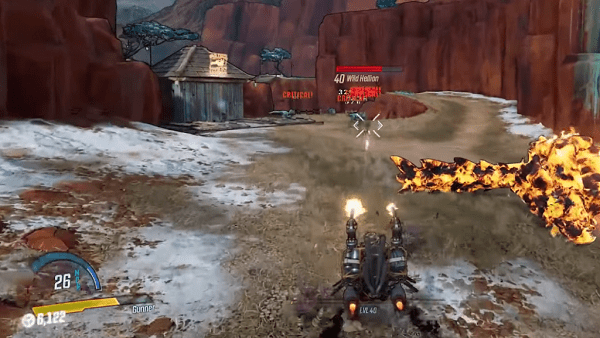 With the release of Bounty of Blood DLC we have received a new vehicle called the Jetbeast. It is exactly what the name suggests, it is half jet and half-beast. This mother bike is similar to what we have been using in Destiny 2. It can hover just like the ones in Destiny but it can shoot unlike the ones in Destiny. The hover motorcycle is available in the new Bounty of Blood DLC for Borderlands 3 players. In this guide, we will explain how to unlock the Jetbeast.

How to Unlock Bounty of Blood Jetbeast

The Jetbeast is a story mode add-on but you can unlock its weapon parts to make changes and improvements to it. You can unlock a number of weapon parts for the Jetbeast by completing quests or simply taking over enemy vehicles. If you choose to take over an enemy vehicle, take it back to ‘Catch-a-Ride’ station. Park your Jetbeast at the Digi-Struct section of the shop and vehicle parts will be automatically added to your inventory. When you steel an enemy jetbeast the location of the station will be highlighted on the map to make it easier for you to get there.

List of Jetbeast Weapon Parts and How to Unlock

Machine guns are one of the upgrades you can make to your Jetbeast in Borderlands 3 Bounty of Blood DLC. It is a quick-firing weapon and its bullets will ricochet on critical hits. The weapon part is available to you by default,

Heavy Cannon is a wide barrel weapon that fires MIRV shells that split into three projectiles that explode on impact. Heavy Cannon is unlocked by taking over an enemy jetbeast in the Blastplains, near the second ‘Catch-a-Ride’ station.

The launcher shoots homing projectiles at the enemies, To unlock this weapon part for your Jetbeast in Bounty of Blood, complete the ‘Money Back Guarantee’ mission in The Blastplains on Gehenna.

The Beefy skin is unlocked after you complete the ‘Saurdew Valley’ side mission in Borderlands 3 Bounty of Blood DLC. The side mission is from Rancher Margot in The Blastplains.

The Woodsy skin is unlocked after you take over an enemy Jetbeast near the Catch-a-Ride’ Station at The Blastplains: Pump & Charge Fast Travel Location.

The Devil Rider Jetbeast skin is unlocked after you complete the ‘The Dandy and Damsel’ in Bloodsun Canyon on Gehenna.

Unlock the Company Car skin by taking over an enemy Jetbeast near the ‘Catch-a-Ride’ Station at The Blastplains – Pump & Charge Fast Travel Location.

Bellik Skiff is unlocked by default and has 15 speed, 8 armor.

Hellion Quickmaw is unlocked after you take over an enemy Jetbeast near the second ‘Catch-a-Ride’ Station in The Blastplains. This head offers 10 armor and 15 speed.

Lucivore Bloodhauler is unlocked after you complete the side mission ‘Devil Rustlers’ from Rancher Margot in The Blastplains. This head offers 12 armor and 13 speed.

Apart from these parts you can add a Thrust Turbine Mod which is unlocked by taking over an enemy Jetbeast near the‘Catch-a-Ride’ Station at The Blastplains: Pump & Charge Fast Travel Location.