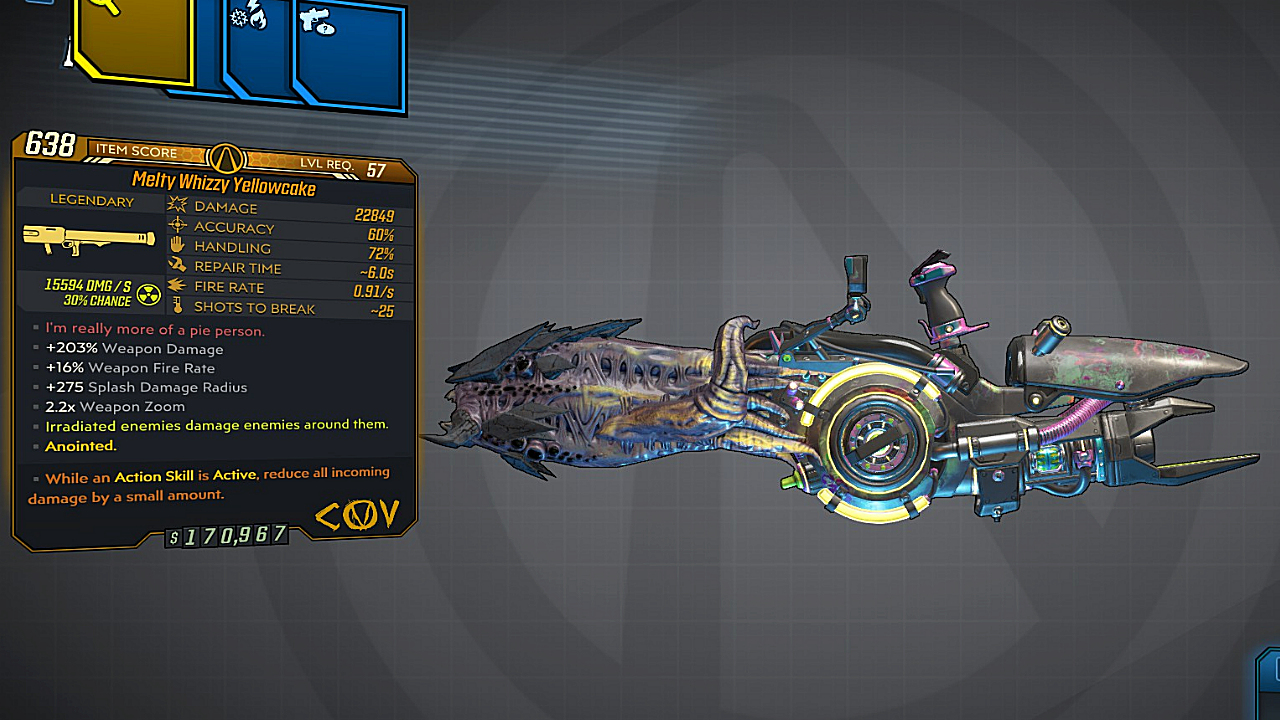 Revenge of the Cartels is on Borderlands 3 seasonal event chart right now and it will go on till the 4th of June 2020. Events always bring a lot of goodies along with them and this one is no exception. Participation can lead to you winning a trove of character skins, legendary weapons, and a cosmetic Trinket. In this Borderlands 3 guide, we are going to walk you through how you can get the Anointed Yellowcake Rocket Launcher.

How To get Anointed Yellowcake Rocket Launcher In Borderlands 3

First, to give you some details about this powerful weapon. This rocket launcher basically causes Radiation damage. The projectile splits into two after it is fired, and these projectiles split up even further upon hitting the target. So, this weapon is capable of dealing five times more damage than an average hit.

But that is just how this weapon starts off. Once it is upgraded and combined with the Anointed Perk, it becomes the goddess of mayhem itself. We know that it will ultimately be nerfed, being so ridiculously lethal. But till then, this is your ticket to going through the most difficult of challenges the game throws your way.

The absurd perfection of the Yellowcake can be perceived in how a number of them are even listed on eBay now and you can purchase a high level Anointed Yellowcake for real money.

Moving on to how you can actually possess it in the game, it can be dropped by three enemies namely Tyrone Smallums, Fish Slap, or Joey Ultraviolet. You can come across Tyrone and Fish Slap at several different parts within the villa, even the entrance, but Joey can be found only in the complete multi-stage boss fight he exists in.

So when you are all set to farm the Yellowcake, go to Maurice and receive the mission Ultraviolet Nights, which’s goal is to take down Joey. The mission can be played repeatedly, and when through the battle Joey is in need of help, he might summon either Tyrone or Fish Slap. So if you get them all together there is an even higher chance for a Yellowcake drop.

Killing Cartel members can also trigger the appearance of Tyrone and Fish, as they come by in response to their distress beacon. Chances will be raised of getting the bosses to drop better loot if you activate the post-game Mayhem 2.0 mode. It is directly accessible through your ECHO menu. Activating Mayhem mode will allow you to get higher level loot which includes the Yellowcake.

Upon high Mayhem level, the Yellowcake might be dropped with the Anointed Perk. The Anointed Perk will allow your weapon to deal 300% damage to an enemy with a healthy level of 90% and higher, which means that it can pretty much blow any of the enemies that come in your way to kingdom come.

As you can get the Yellowcake only if dropped by the above mentioned bad guys, you will need to play the mission repeatedly at high Mayhem levels, till you obtain it. Even after obtaining it, you can keep going back, after increasing the Mayhem Levels and you can get the enemies to drop an upgraded version of the rocket launcher.

Finally, you will come to a point where you will have a ridiculously powerful weapon that will make you essentially unbeatable.

So now that you have all the info from our guide, go ahead and don’t miss the opportunity of finding the Anointed Yellowcake Rocket Launcher in Borderlands 3 Revenge of the Cartels event.