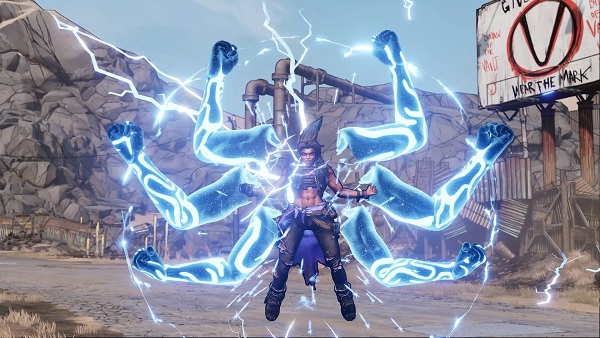 Taking the role of Maya, Amara is one of the six Sirens in the Borderlands universe. A close-ranged character who likes to go into the heart of battle, Amara benefits from controlling the combat zone to gain advantages for fellow Vault Hunters. She can also augment all of her Action Skills, allowing her to choose abilities from one skill tree and spec into a different Action Skill. The following Borderlands 3 Amara Builds Guide will give you an idea about how to build her with recommended skills, Action Skills, and augmentations.

An important thing to consider before we start. Since everyone is new to the game and still tinkering around with different things, none of the builds are supposed to be taken as they are (although you most certainly can, we did!) so you should try to theorycraft a little on your own and see which of the Borderlands 3 Amara Builds work the best for your playstyle.

Amara is as far off from a support character as it’s possible but there’s hardly anyone else who can control the combat zones like her. So while she can’t directly buff her fellow Vault Hunters, she does support them in her own way.

This build focuses on utilizing Remnant, Wildfire, Catharsis, Eternal Fist, Allure, and Indiscriminate to wreak literal havoc on the combat zone she’s in. Another focus of the build is maximizing her elemental damage output. While she primarily focuses on Shock as her primary elemental damage, the build gives her the freedom to switch to Corrosive or Incendiary if that’s what the situation demands.

Apart from that, she also gets an insane boost to her Action Skill and secondary target damage that get pulled in by her Action Skill. The build sees her excelling at AOE control and should remind you of Maya with how little she actually goes into a battle.

Lastly, if you aren’t a fan of Ricochet because of its laughable damage output, you can always spec those 5 points somewhere you feel will prove more valuable. It’s just a personal preference.

The build focuses on her getting in the battle and utilizing her lifesteal to keep her health pool topped up. If things start to go sideways, she always has the confusion effect from Glamour to make sure she isn’t the focus of all the enemy firepower. And even if that fails, she always has the Guardian Angel in her back pocket but things normally can’t get that far.

Elemental damage types have always been so fun to use in the Borderlands games and this game is no different in any regard. This build is all about dealing elemental damage and then some more.

Amara’s two primary sources of self-sustain are covered by Clarity and Sustainment. Since you can consider this build a branch of our ‘Goddess of Thunder’ build, it gives Amara even more freedom of switching elements on the fly. For this, you should go with Fast Hand(s) so that she can swap Maliwan elements in an instant.

Since she’s a Siren, what good would she be if she can’t clump enemies up together and beat them up? To achieve just that, we’ve got the standard Phaselock that should complement Indiscriminate and Allure for some really good group damage. As for the Catharsis, it has more of a nostalgic factor … something, something Krieg’s Bloodsplosion.

Lastly, the build’s link shows the Corrosive element equipped but feel free to swap it out for something more suited to the situation at hand.

The sole purpose of this build is to turn Amara into a literal tank that can soak a lot thrown at her without compromising on her insane damage output. To start, you need to go with Fracture/Phaseslam with Soulsap and any kind of elemental that the situation at hand is demanding. You can try to go with the Helping Hand(s) if you want for additional damage reduction or may skip it altogether.

While trying to pursue this build, she might struggle a little during the early levels since she’ll gain access to Soulsap at about Level 40. Until that point, remember that no enemy would be able to kill you if you just go in and kill it first. This is where Revelation should help out. Pump that DPS and protect the beloved Siren.

After she hits the Level 40 threshold, go crazy in the Mystical Assault tree and get things like Soulsap and Avatar at the earliest. Her time to shine is now. One thing I should quickly mention here is that the build takes away Amara’s long-ranged prowess so don’t bother taking those fights.

The main aim of this build is to enable Amara to dish out the maximum possible elemental DoT damage without sacrificing a lot of weapon damage. While you can completely do away with Catharsis if you want, adding in at least one point would grant her some free elemental damage. Infusion, on the other hand, is not worth a slot. You can stick to it during the early levels, but try to get rid of it after reaching the level cap or preferably before it.

You can take those points and spec them into Mystical Assault tree to get Wrath. That should give her a nice bonus, especially when combined with Ties that Bind and Allure since she’ll be able to have a ton of cooldown reduction and will get Action Skill incredibly quickly with Restless.

As always, nothing is ever set in stone and you’re free to theorycraft on your own and come up with something that complements your own playstyle.

Melee, when combined with Rush, can be an incredibly fun combo to use, thanks to all the increased Action Skill damage you can get from the stacks and Jab Cross. Your Action Skill, on the other hand, should give you Transcend, Laid Bare, Wrath, and Find Your Center.

Apart from this, her Violent Tapestry should allow her to restore her stacks because of her AS elemental damage hitting multiple targets at the same time. If you’re still having trouble with maintaining her stacks, what you can do is to go with Do unto Others but that’d most likely be overkill.

What you’re looking to do is to rush in with your Supergirl punch and rely on your weapons and melee to tear through the enemy lines. If you’re looking to get even more personal, try to go with a shotgun that also takes advantage of the increase in melee damage and go to town with it.

This marks the end of our Borderlands 3 Amara Builds Guide. If you’re interested in learning more about the game, check out our FL4K Builds, Zane Builds, and Moze Builds.