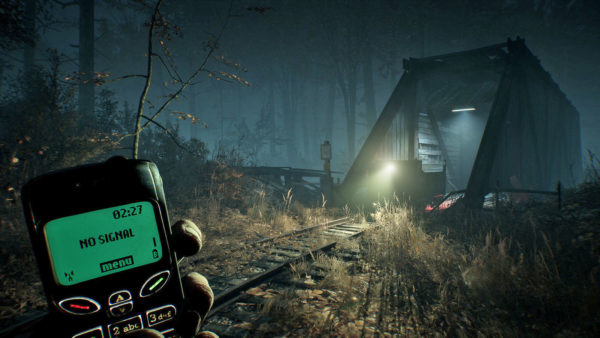 Cell phone in Blair Witch is an important gameplay tool that connects you to other notable characters in the game, receive helpful information and text messages. A cell phone will be useless if you aren’t able to call anyone and in Blair Witch you can call other characters and the phone itself is packed with contacts.

Alan is Ellis’ old army friend, however, calling him will not always result in him picking up as mostly you’ll hear the “Line Busy” message.

Ashley is another of Ellis’ old army friends. She won’t pick up the phone and you’ll only hear the “Line Busy” message.

Calling the Doctor will sometime result in you hearing the “Line Busy” message and sometimes the doctor will actually pick up the phone.

This is a sort of a useless contact given that Ellis never orders any pizza in Blair Witch. Given that Ellis has saved the number, it must be his favorite place.

Jess used to be Ellis’ girlfriend and remains in contact with Ellis throughout the game. She mostly picks up the phone and both talk about their relationship and Ellis mental state. Sometimes, Jess herself will call Ellis.

Another one of Ellis’ old military friend but, he won’t pick up and you’ll just hear the “Line Busy” message.

Another old military friend who doesn’t pick up the phone when you call.

Also, an old military friend of Ellis who doesn’t pick up the phone. It’s like Ellis’ friends don’t want to talk to him.

Ellis can also call Sheriff Lanning from time to time. However, he won’t always pick up and it s that? It’s for you to find out as you advance through the story.

Another one of Ellis’ old military friends who won’t pick up the phone and you’ll only hear the line busy message.

While you won’t get any line busy message while calling the VA office but it’ll only lead you to an automated message telling you that all agents are busy. The message will give you options but you can’t press any buttons on your phone, so it’s basically useless.

Dr. Reba of Rocco’s Animal Clinic will actually pick up the phone you call her and will also show concern for Bullet’s health. It won’t lead anywhere but you can call her during a particularly scary segment of Blair Witch.

This isn’t really calling anyone instead you can check if anyone has left you any voice messages. The messages you hear won’t always be friendly and are pretty weird.

That is for all of the Blair Witch Cell Phone Contacts Guide with tips on which contacts will pick up and which ones are useless.

If you are interested in learning more about the game then you can check out our guides on how you can enter the bunker. You can also check out our review of the game.