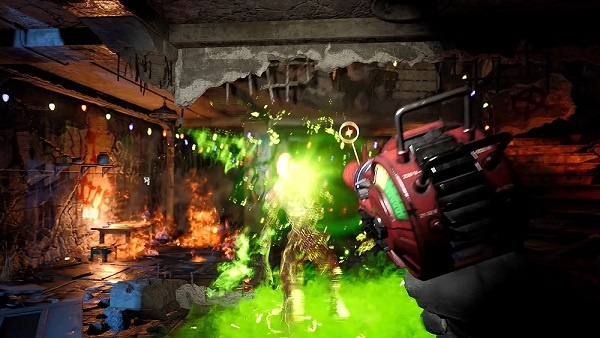 The entirety of Cold War zombies Easter Egg revolves around acquiring the Wonder Weapon and its 4 upgrades, collecting items, solving a few puzzles, and then completing the final boss fight. Below, you’ll find all the steps that you need to complete to solve the Easter Egg in Die Maschine:

To turn on the power in Die Maschine, you’ll need to access the Particle Accelerator area. Once there, hit the ‘Power’ button to turn on the power. To learn more about how to get there, check out our detailed guide.

After turning on the power, return to the Particle Accelerator area, and activate two terminals. Once done, interact with the Anomaly at the room’s center to enter the Dark Aether – it should have the Pack-a-Punch in front of you but with a missing part. Inside the Dark Aether, follow the objective marker to get teleported to the Aether Tunnel. From the Aether Tunnel, grab the machine part and return to the Pack-a-Punch machine to activate it.

After building the Pack-a-Punch machine, another Anomaly will spawn somewhere on the map. Interact with it to get teleported to the Dark Aether once more but this time, you’ll need to find 3 parts. For those of you who are having trouble finding the Anomaly, head over to the ‘star’ objective marker on the mini-map.

The items that you need to find in the Dark Aether will always spawn in the same areas but the order in which they spawn is randomized. Try to visit these locations as quickly as you can and you’ll get all 3 Aetheroscope Parts without any issues.

With all 3 Aetheroscope Parts in hand, head over to the Buildables Bench and make the Aether Scope.

After creating the Aether Scope, you’ll need to return to the Dark Aether once more. The portal can be found anywhere on the map but there are chances you’ll also find it in the Medical Bay. Once inside the Dark Aether, go to the Medical Bay and collect Doctor Volgel’s Diary sitting on a computer table.

After heading out of the Dark Aether, return to the computer in the Medical Bay and interact with it to enter the password. After entering the password, you’ll notice the machine right outside the window turn blue.

Step #5 – Getting the Wonder Weapon

To get the Wonder Weapon, you’ll need to kill the Megaton and the 2 mini-bosses it splits into. One of them will drop a yellow keycard. You need to take the keycard to the locker with the broken glass in the Weapons Lab. Insert the keycard in there to get the D.I.E. Remote Control. You need to take it to the “Living Room” and interact with the machine through the crack in the wall to activate it.

The D.I.E. will now become a trap, sucking in zombie souls which you’ll need about 25-30 of. Continue to lure zombies to the area to keep the process going. Failing will require you to wait for around 30 seconds before activating the machine again.

If you’re successful, however, you’ll get the option to ‘discharge’ the D.I.E. machine and get the D.I.E. Machine.

There are a total of 3 upgrades for the Wonder Weapon in Die Maschine. Let’s talk about these upgrades one by one:

Step #6.1 – Wonder Weapon Fire Upgrade
To get the upgrade, interact with the portal at the ‘Pond’ to enter the Dark Aether. Once inside the Dark Aether, go to the Crash Site and melee the box under the floating airplane part with the Wonder Weapon to get the Fuse. Now head over to the Weapons Lab in the Facility and place the Fuse in the Plasma Clutter in front of the perk machine.

After exiting the Dark Aether, head over to the ‘Pond’ and interact with the box on top of the truck to get the D.I.E. Thermophasic weapon.

Step #6.2 – Wonder Weapon Lightning Upgrade
To get the D.I.E. Electrobolt, you need to head over to the Particle Accelerator area and interact with the anomaly underneath the staircase to enter the Dark Aether. Once inside, you’ll need to find a total of 3 energy crystals, drain them, and shoot a weapon crate. You’ll need to drain them using the Wonder Weapon. If you’re stocked up on ammo, try to shoot a little to make room. Their locations are:

After sucking an Energy Crystal, return to the weapon crate in the Particle Accelerator area to get the weapon. We’d also recommend using the Stamin-Up to increase the speed since you won’t have a lot of time in the Dark Aether.

Step #6.3 – Wonder Weapon Ice Upgrade
For the Cryo-Emitter, you need to head over to the ‘Penthouse’ and shoot the box facing the ‘Pond’ with the Wonder Weapon. After you’re done, head down to get the Empty Flask from the ground. Once you’re done, find the tree with a little fungal outgrowth on it.

What you need to do is to lure a Megaton to the tree and bait it into damaging the fungal growth on the tree. Once done, place the Empty Flash below the outgrowth and wait for it to completely fill up. It shouldn’t take more than 20-30 seconds. Pick up the Filled Flash from the tree and head over to the Medical Bay and interact with the weapons crate just before the door leading to the power area to get the D.I.E. Cryo-Emitter Wonder Weapon.

Once it’s full, pick up the Plaguehound Gas and place it on the weapon crate in the Crash Site followed by melee-ing it to get the D.I.E. Nova V.

Step #7 – Shooting the Canister in the Medical Bay

Once you’ve got all the Wonder Weapon upgrades, head over to the Medical Bay and shoot the 4 canisters on the edge of the floating, blue machine with each upgrade of the Wonder Weapon – one upgrade for one canister.

After hitting all 4 canisters in the Medical Bay, you’ll need to interact with another anomaly between the Medical Bay and the Pack-a-Punch machine. Take the portal to the Dark Aether to head over to the area directly above the Speed Cola to interact with another anomaly and start a ghostly interaction. After the interaction is over, return to this area in the normal world to get the Dark Aether Wrench.

After collecting the Dark Aether Wrench, you’ll need to head over to the spawn area and interact with the 4 corners of the tank. This will cause a zombie to emerge from the top of the tank. You can kill the zombie and throw a Semtex at the tank’s open lid.

Remember that you won’t be able to shoot while holding the Decontamination Agent so you’ll need to rely on your teammates to protect you. If you’re playing solo, you can always swap weapons if you need to and pick up the ball again.

To complete the step, you’ll need to split a Megaton into two and bring both of them in the Medical Bay, directly under the machine whose 4 canisters you shot earlier. After both of them are sucked by the machine, proceed to the computer and interact with it to initiate a small lockdown. After the lockdown is over, immediately run out to the open since you’ll be swarmed with a large horde waiting outside.

The boss fight itself is pretty easy but can get a little hectic at times. The objective is to protect Orlov while he’s trying to deactivate the Particle Accelerator from 3 waves of zombies. It’s better to split your team into 2 and protect from different sides. Remember that things like Ray Gun and Wonder Weapon can do wonders here.

After you’re done, all of you will need to make your way to the ‘Pond’ to exfil. Remember that not all of you need to make it there. If 1-2 players make it there, that should be enough. Also, while trying to escape, beware of the lightning in your path – it deals a lot of damage. After a brief cutscene, you’ll unlock the ‘Seal the Deal’ trophy.

That’s all we’ve got in how to complete the Easter Egg in Die Maschine. For more helpful tips and tricks, you can check out our detailed Call of Duty: Black Ops Cold War wiki guides.