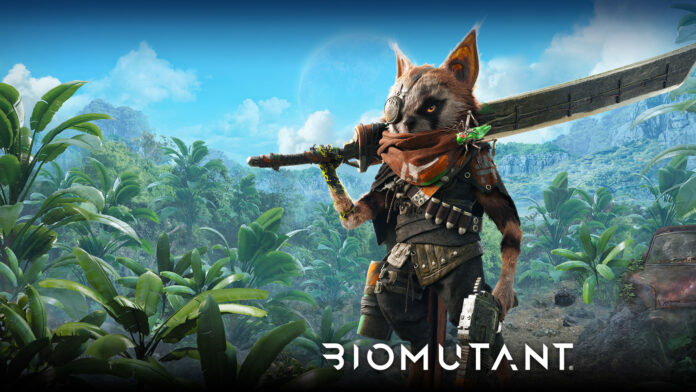 Biomutant is an open-world RPG with quite a unique setting. The game has launched for PC and consoles. The game is quite pretty to look at but, PC players are reporting errors and issues with Biomutant PC like Unreal Engine crash, blurry graphics, game freezing, no audio, crash at startup, and more. Here I have compiled a list of errors and issues that Biomutant PC players are experiencing along with their fixes and workarounds. Also, I have listed how to disable motion blur, film grain, and other post-process effects as Biomutant has no in-game option to disable them.

Biomutant was quite an anticipated game since its reveal. However, the game got a mixed reception from both critics and gamers due to its complex mechanics that the game doesn’t explain, empty open-world, and more. But these are not the only issues with Biomutant as PC players are reporting errors like Unreal Engine crash, game freezing, no audio, crash at launch, blurry visuals, controller not working.

The following are the errors and issues that PC players are experiencing with the game along with their fixes. I have also listed how to disable motion blur, film grain, lens flare, and other post-process effects.

Biomutant PC players are reporting that the game is crashing in-game. There are multiple reasons behind the Biomutant in-game crash and here is how to fix it.

First, try reinstalling or updating the GPU driver. Do a clean installation and it will fix the Biomutant in-game crash.

If players have overclocked their GPU, it might be the reason Biomutant is crashing while playing. The overclocking could be pushing the GPU to its limits. Revert the GPU back to its default GPU clock and the game will stop crashing.

Alternatively, the GPU could be old instead of overclocked and the game is too much load on it. Players can try reducing the graphics quality or use MSI Afterburner to drop the GPU clock by 100 MHz. In case you don’t want to mess with the GPU clock to scale back graphics, capping the game at 30 FPS will do the trick. Open Nvidia Control Panel > Manage 3D Settings > Program Settings > select Biomutant from the list or add if it isn’t there. Scroll down to “Max FPS Limit”, enable it and set the value to 30. Biomutant will be locked at 30 FPS reducing GPU and CPU load. The game will stop crashing.

Another reason for the Biomutant in-game crash could be the use of third-party tools and software like MSI Afterburner, RGB software, or mouse and keyboard software. Disable any third-party tool you have installed and also disable Steam overlay and GeForce Experience overlay. This will fix the Biomutant crashing issue.

Players are reporting that even though they have selected the highest graphics quality, Biomutant looks blurry or seems like using low graphics preset. This issue is caused due to enabling Dynamic Resolution from the game’s menu. Disable it as it’s currently bugged and makes the game look blurry or low quality. If you want to scale back resolution to save performance then use the resolution scaler instead of Dynamic Resolution in Biomutant.

Not all players like the in-game effects such as motion blur and film grain. While most games have a toggle to disable such effects, Biomutant PC has no such option in the menu. But, there is a way to disable these post-process effects. Open File Explorer/This PC/My Computer and paste the following in the navigation bar above.

Open the Engine.ini file in notepad and make the following changes if players want to disable all post-process effects. If there is an effect you don’t want to disable then set that option to 1.

Save these changes and then right-click the Engine.ini file > Properties > check “read-only” and hit apply. Launch Biomutant and motion blur, film grain, and other post-process effects will be disabled.

Some Biomutant PC players are reporting that the game is freezing when they launch the game. This could be due to any GPU tweak tool or overclocking software like MSI Afterburner. Delete any such software and Biomutant won’t freeze at launch. Using in-game overlays like Steam overlay or Geforce Experience overlay can also freeze the game. Disable them too and the issue will be fixed.

Biomutant PC players are reporting that the game is crashing with Unreal Engine Crash or UE4 Crash error. There are multiple reasons behind the Biomutant Unreal Engine crash and here is how to fix it.

Another reason for the crash could be the outdated operating system. Update your OS to the latest build and the error will be fixed.

Unreal Engine 4 crash or UE4 crash for Biomutant could be occurring due to overclocked GPU. Revert the GPU to its default clocks and the issue will be fixed. If you haven’t overclocked your GPU then try capping the game at 30 FPS. Open Nvidia Control Panel > Manage 3D Settings > Program Settings > select Biomutant. Enable “Max FPS Limit” and set the value to 30. The game will be locked at 30 FPS and will stop crashing with Unreal Engine error.

Biomutant PC players are reporting that they are not getting any audio or sound while playing. For some players, the cutscene audio or NPC audio is missing. This could be that PC users haven’t selected the right audio output device. Open Settings > System > Sound > App volume & device preferences’ under Advanced sound options. Make sure to select your desired audio output device for the game. This will fix the no audio issue with Biomutant.

Biomutant PC players are reporting that the game is not starting or crashing at launch. There are multiple reasons behind the Biomutant crash at startup issue and here is how to fix it.

Your anti-virus/Windows Security might be blocking game files and causing Biomutant to crash at launch. Either disable real-time protection or exclude the game’s install folder from it. Open Settings > Update & Security > Windows Security > Virus & threat protection > click Manage Settings under “Virus & threat protection settings” > click “add or remove exclusions” under “Exclusions”. Browse to the Biomutant folder and add it. After that, verify game files from Steam and the issue will be fixed.

Another reason for Biomutant to crash at launch could be corrupt or missing Visual C++ files. Install the latest Microsoft Visual C++ Redistributables both x64 and x86 versions and the issue will be fixed.

Performance is an issue that is no stranger to PC gamers. Biomutant PC players are reporting performance issues like Low FPS, random FPS drops, and more. Here is how to fix these PC performance issues and how to boost FPS in Biomutant. First, install the latest GPU driver and do a clean installation.

If you are playing the game on a PC or a laptop with an integrated GPU and a dedicated GPU, then chances are the GPU isn’t switching to the dedicated GPU and causing performance issues like FPS drops. Here is how to fix it.

As for the AMD, pen Radeon Settings > Preferences > Additional Settings > Power > Switchable Graphics Application Settings. Select the game and select the “High-Performance profile” to the game under Graphics Settings.

These settings will make sure the game switches to the dedicated GPU and the performance issues will be fixed.

Apply these settings and players will see a boost in FPS and overall performance.

That is all for our Biomutant fixes for errors and issues like the in-game crash, blurry graphics, game freezing, unreal engine crash, and more. If you are facing errors and issues with other PC games or your PC then also see our hub for commonly occurring PC errors and their fixes.