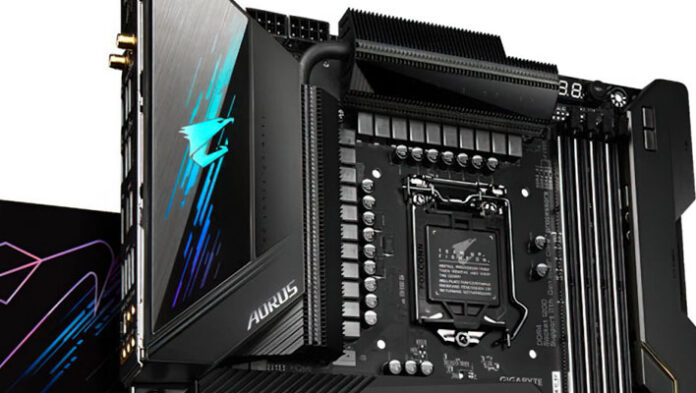 The following are some of the best Z590 motherboards that we can recommend for the 11th generation Intel CPUs:

Asus is known for making some of the best motherboards on the market and here we have the ROG Maximus XIII Hero which is one of the higher-end models. You are expected to pay a bit more for Asus products but you get those bells and whistles that you expect for the price.

The motherboard comes with a couple of goodies such a the ROG keyring. Also includes in the box are all the cables, crews, and cable ties that you are going to need for your build. This is the Wi-Fi version of the motherboard so it comes with an antenna to catch those Wi-Fi signals. Inside the box, you also get a GPU support bracket to prevent GPU sag.

The Asus ROG Maximus XIII Hero comes in black but there are texture differences that make the different parts of the motherboard stand out. It does have a unique look if you are interested in showing it off.

The motherboard has a 14+2 power design. It has 8+8 pin power connectors for the CPU so you should be able to overclock your unlocked CPU pretty well. There should be no power delivery issues. There are three fan headers at the top of the board. One is for the CPU and there is another one of the AIO if you are interested in getting an AIO liquid cooler.

Next to that, you have the code display that is going to give you an error code in case something goes wrong. This should make troubleshooting a bit easier. You also get the power and reset buttons of the board itself along with addressable RGB headers. 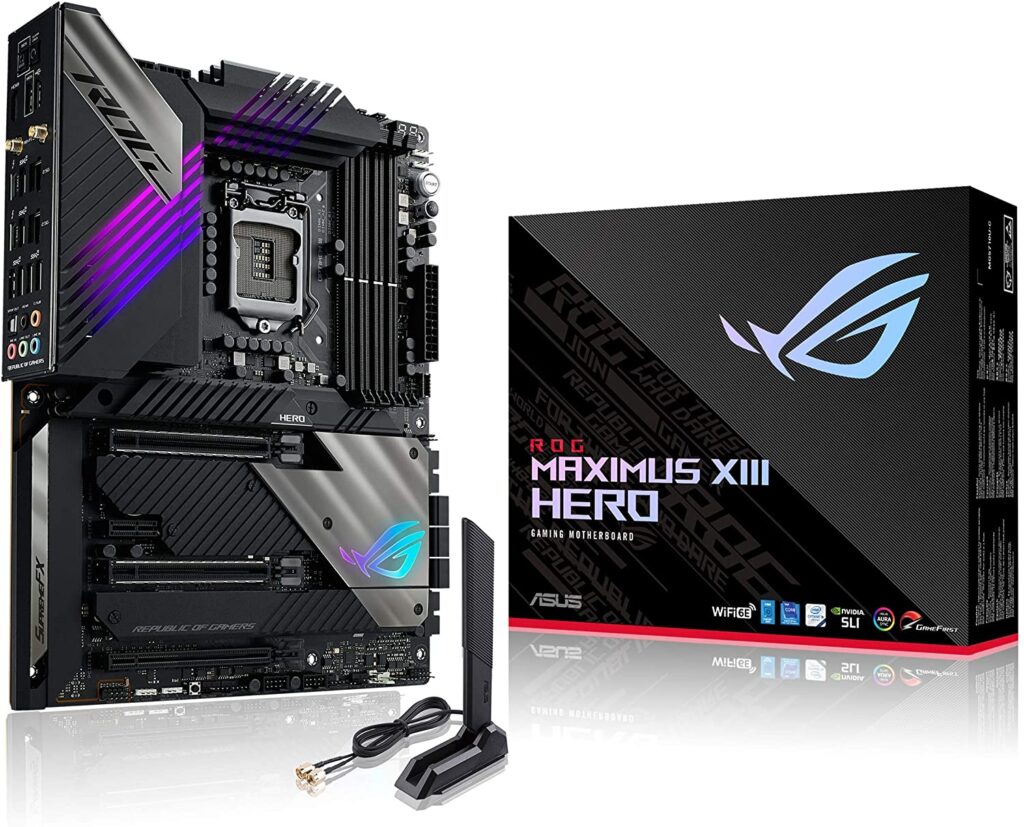 On the side, you get a pair of USB 3 connectors along with 6 SATA 6 ports. At the bottom, you have headers for your water cooling including the temperature sensors and the pump.

At the bottom of the board, you also get plenty of headers for case fans along with RGB lighting headers and USB 2.0. Next to the RGB headers, you get a retry button which will come in handy if something goes wrong during overclocking.

There are 4 M.2 slots for PCIe SSDs but it is worth noting that only the top one supports PCIe Gen4. All of them are covered in heatsinks so thermals should be fine but if you are interested in getting an aftermarket cooler for your SSD then you can check out our recommended SSD heatsinks. Note that this motherboard does have 6 SATA6 ports but 2 of them will be disabled if you are using all the M.2 slots. This is due to the PCIe lanes limit.

The motherboard has an integrated I/O shield for easy installation and talking about the ports and connectivity options that you get at the back. YOu get a Clear CMOS and BIOS reset button. You also get a BIOS USB port so that you can flash the BIOS without having to install a CPU. You also get an HDMI port if you need it. You have the Wi-Fi antenna connections at the back as well.

You get plenty of USB 3.2 ports but you also have some USB 2.0 ports if you need them. You also have the audio ports at the back which do light up so that you know what you are looking for in the dark.

The TUF series is Asus’s budget-friendly option which ensures durability. The TUF Gaming Z590-Plus WiFi is one of the new models that support overclocking of the 11th generation Intel CPUs and also features PCIe Gen4.

This version does not have all the options as compared to the Asus ROG Maximus XIII Hero but it is going to get the job done for most people. The WiFi version uses a wireless CNVi module and that is the only difference when compared to the non-WiFi variant.

The motherboard has a clean design with black armor and plenty of cooling on the chipset. As this is a budget-friendly option, you only get 8+4 pin power connectors for the CPU. This can limit the amount of power that the CPU gets and the overclocking results that you get as compared to 8+8-pin power connectors but you should still be able to get away with some decent overclocks on an unlocked CPU. 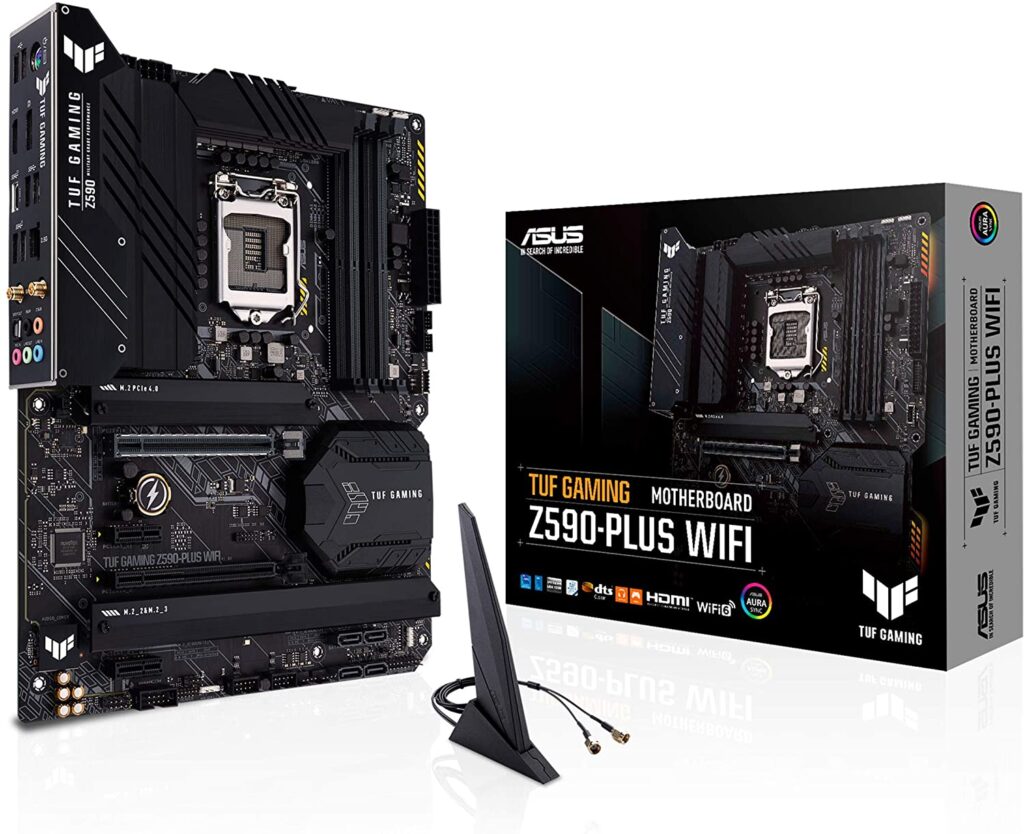 As is the case with the Maximus, only the top M.2 slot supports PCIe Gen4. The same is the case for the top PCIe slot which is reinforced for better GPU support. There are 4 DIMM slots on the board and it supports RAM speeds up to 4800 MHz. You can have up to 128 GB of RAM on this motherboard with all the slots populated.

The following is what you need to know about the ASUS TUF Gaming Z590-Plus WiFi:

These are the best Z590 motherboards that we recommend you buy in 2021. If you are interested in similar content then you can check out our recommendations for the best custom RTX 3070 graphics cards.

The GIGABYTE Z590 AORUS Elite AX is one of the more affordable options as compared to the Asus models. You still get the Z590 chipset along with other premium features but the pricing is a bit lower than other models here.

The motherboard does have some weight to it and looks pretty nice. The motherboard comes with plenty of armor and all the DIMM slots, as well as the top PCIe slot, are reinforced. There are 3 M.2 slots but only the top 2 come with heatsinks.

The Aorus logo on the motherboard does indeed light up as you can see in the image below and the motherboard has other RGB lighting zones as well. All the things you expect to see on a high-end motherboard. 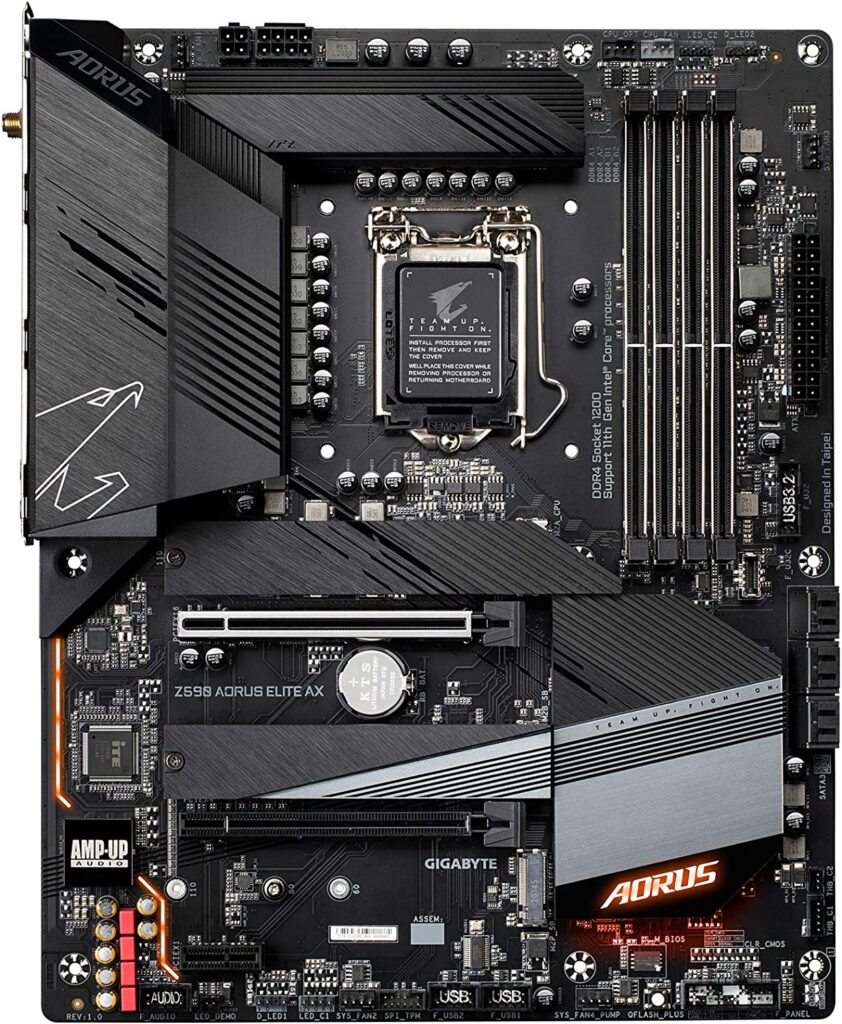 Other than that you get AMP-UP audio and 6 SATA ports for your storage. At the top, there are 8+4 pin power connectors to provide enough power to the motherboard when overclocking.

The motherboard comes with an integrated I/O shield for easy installation. At the back, you get some USB 3.2 ports and USB 3.0 ports as well as a Type-C port. You also get your audio jacks as well as 2.5G ethernet, Wi-Fi connectors, and DisplayPort.

If you are interested in saving a few bucks then you can opt for the GIGABYTE Z590 AORUS Elite that is the version of the same motherboard that does not come with Wi-Fi.

The following is what you need to know about the GIGABYTE Z590 AORUS Elite AX:

This is a smaller ITX motherboard so the features that are you get are not as many as that of an ATX motherboard. There are only 2 DIMM slots but you can get 64GB sticks to get to 128GB of RAM. You also have a single PCIe slot for your graphics card. Both the DIMM slots and the PCIe slot are reinforced for better support.

The motherboard comes with plenty of armor and cooling. There is a single 8-pin power connector to provide power to the CPU which can limit the overclocking potential of your build but if you are going for a small form factor PC then you do not want too much heat in your small case. 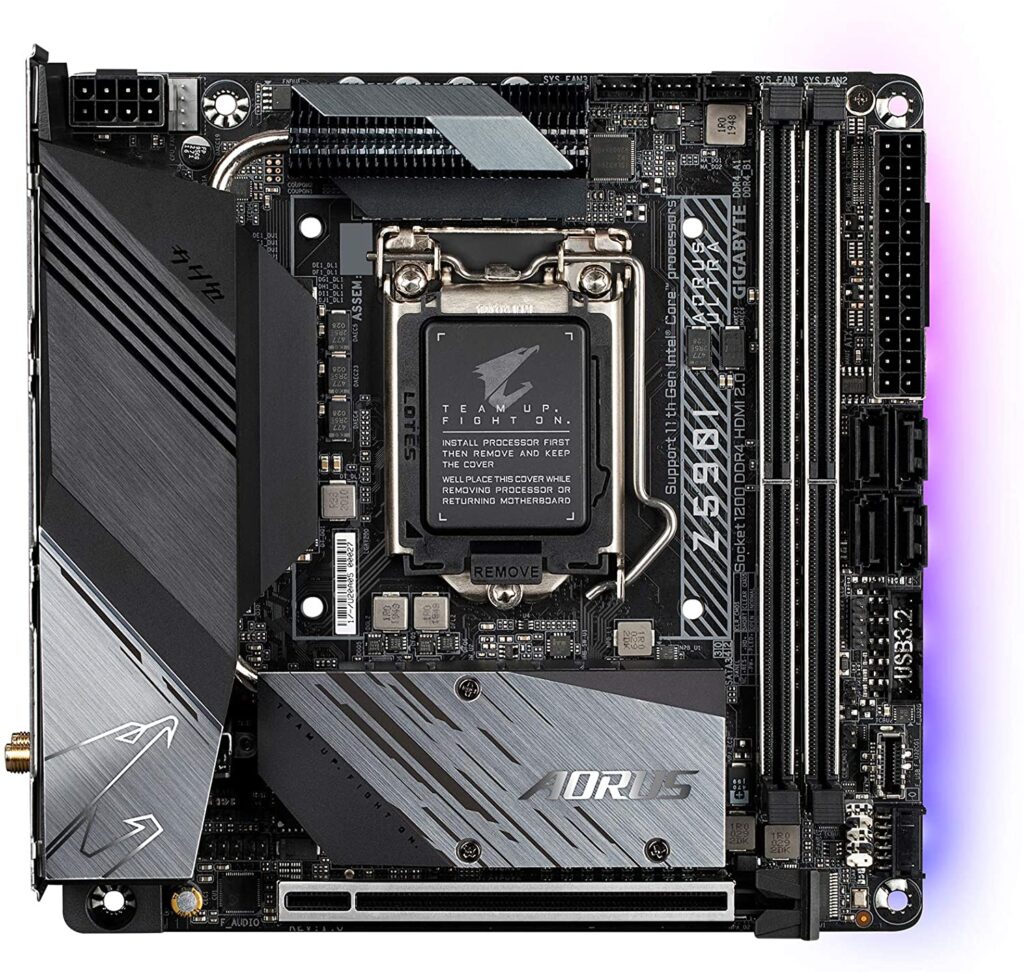 You get 3 SATA6 ports and there is an integrated I/O shield for easy installation. t the back, you get some USB 3.2 ports and USB 3.0 ports as well as a Type-C port. You also get your audio jacks as well as 2.5G ethernet, Wi-Fi connectors, HDMI 2.0 and DisplayPort. You also get a Q-Flas button and a dedicated BIOS USB port so that you can flash the BIOS without having to install a CPU.

The following is what you need to know about the Gigabyte Z590I AORUS Ultra:

These are some of the best Z590 motherboards that we can recommend for now in 2021.