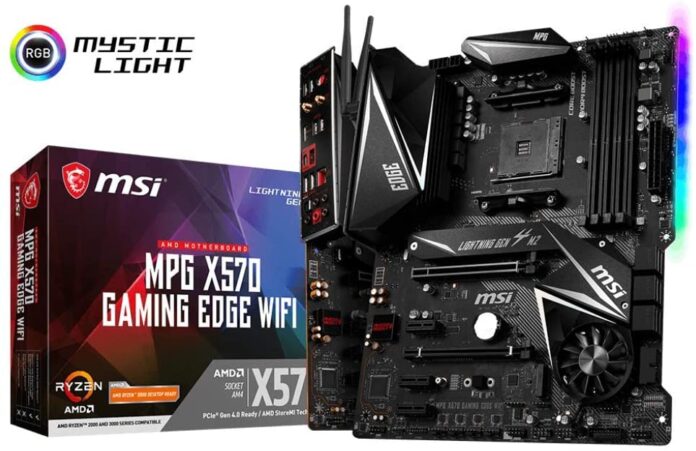 AMD Radeon RX 6800, 6800 XT, 6900 XT graphics cards have been announced. These feature the new 7nm+ based RDNA2 architecture and claim to take on the RTX 3080. If you are interested in getting one of these graphics cards and want to get the best possible performance then you are going to need a 500 series motherboards. Here we are going to look into some of the best motherboards that you can buy right now for the AMD Radeon RX 6800, 6800 XT, 6900 XT graphics cards.

AMD recommends using AMD Ryzen CPUs with the AMD Radeon RX 6000 series CPUs in order to take advantage of Smart Access Memory. This feature allows the processor to take advantage of all of the memory of the graphics card and does not limit it to 256 MB. The feature increases the performance of your CPU and GPU by up to 13%. As more developers optimize their games with this feature in mind the performance boost should increase even more dramatically.

This feature works with all the Ryzen 5000 series CPUs and the RX 6000 series graphics cards. That is why we are only going to cover recommend the X570 chipset motherboards and not the Intel platforms.

Another reason why we have done so is, as of right now Intel does not support PCIe Gen4 on their CPUs. While the upcoming 11th generation Intel CPUs are going to support the feature we think that if you are going to buy a motherboard right now then it should be future-proof and we do not want you guys to have to upgrade your motherboard next year.

The following are the motherboards that we can recommend for the AMD Radeon RX 6800, 6800 XT, 6900 XT graphics cards:

The Asus ROG Strix X570-E is a premium motherboard but it is not priced as high as the Crosshair VIII Formula. This is more of a prosumer or gaming-oriented motherboard. There is not integrated water cooling support and you do not get all the water cooling support that you get on the Crosshair VIII Formula but you do still get plenty of bells and whistles that you expect from premium Asus motherboards.

The motherboard features 8 SATA6 ports. Which should come in handy if you have plenty of HDDs that you want to use alongside your faster SSDs. There is a fan for the chipset under the armor and it spins 2600 RPM. The fan is pretty small and does not make a lot of noise. Once you have case fans installed and a graphics card in the build you will not be able to hear it. 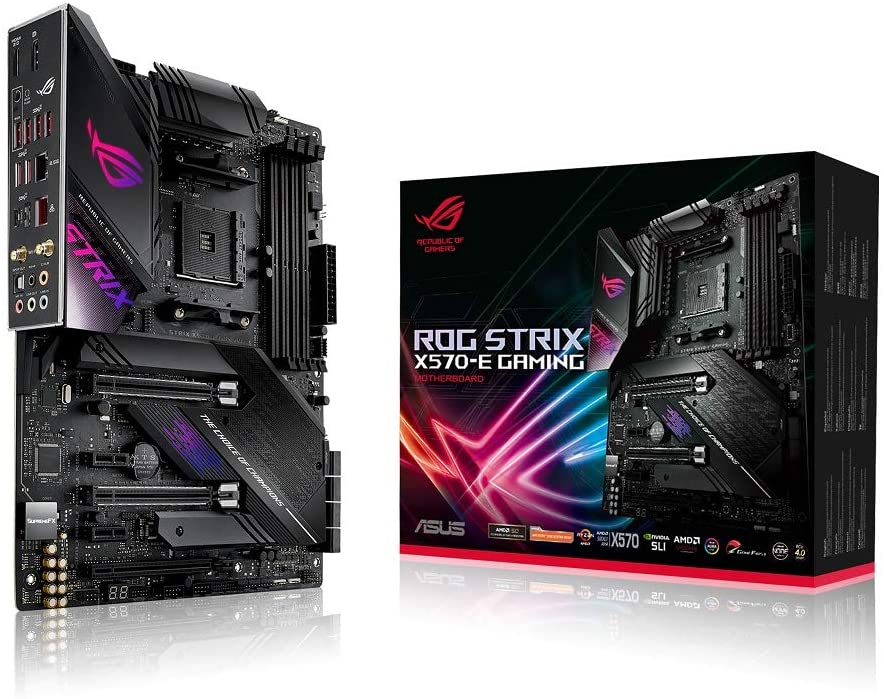 The motherboard has 4 DIMM slots and under the armor, you have room for 2 M.2 slots. The motherboard has plenty of headers for case fans and RGB. There is an error LED light that will give you an error code for troubleshooting when something goes wrong.

There are two RGB lighting zones on the motherboard and the ROG logo also lights up as well. You can customize the lighting and can turn off the lighting as well. On the back, you have the BIOS flashback button and the BIOS clear button. There is a BIOS USB port as well as other USB ports.

There are three PCIe slots and two of them are reinforced for better graphics card support. Other connectivity features include 2.5G ethernet and normal ethernet ports as well as Wi-Fi. Then you have all the jacks for your headphones, microphone, etc.

If you are looking for a premium motherboard to go with your new AMD Radeon RX 6900 XT then this is a model that we can recommend.

Asus is known for making some of the best motherboards that you can buy on the market. The Asus ROG X570 Crosshair VIII Formula is a top of the line variant that is made for enthusiasts that want the best performance possible without compromise. That is why it comes with integration for VRM water cooling.

The motherboard is covered in armor which is something that you expect from a high-end Asus motherboard and it has a subtle silver and black color scheme which should blend in well with the rest of your build.

For the CPU you have 4+8-pin power connectors, which will provide power to the CPU so that you can overclock it. There are 4 DIMM slots for your RAM and next to those you have the start and reset buttons on the motherboard itself. Above them, you have plenty of fan headers and RGB headers. 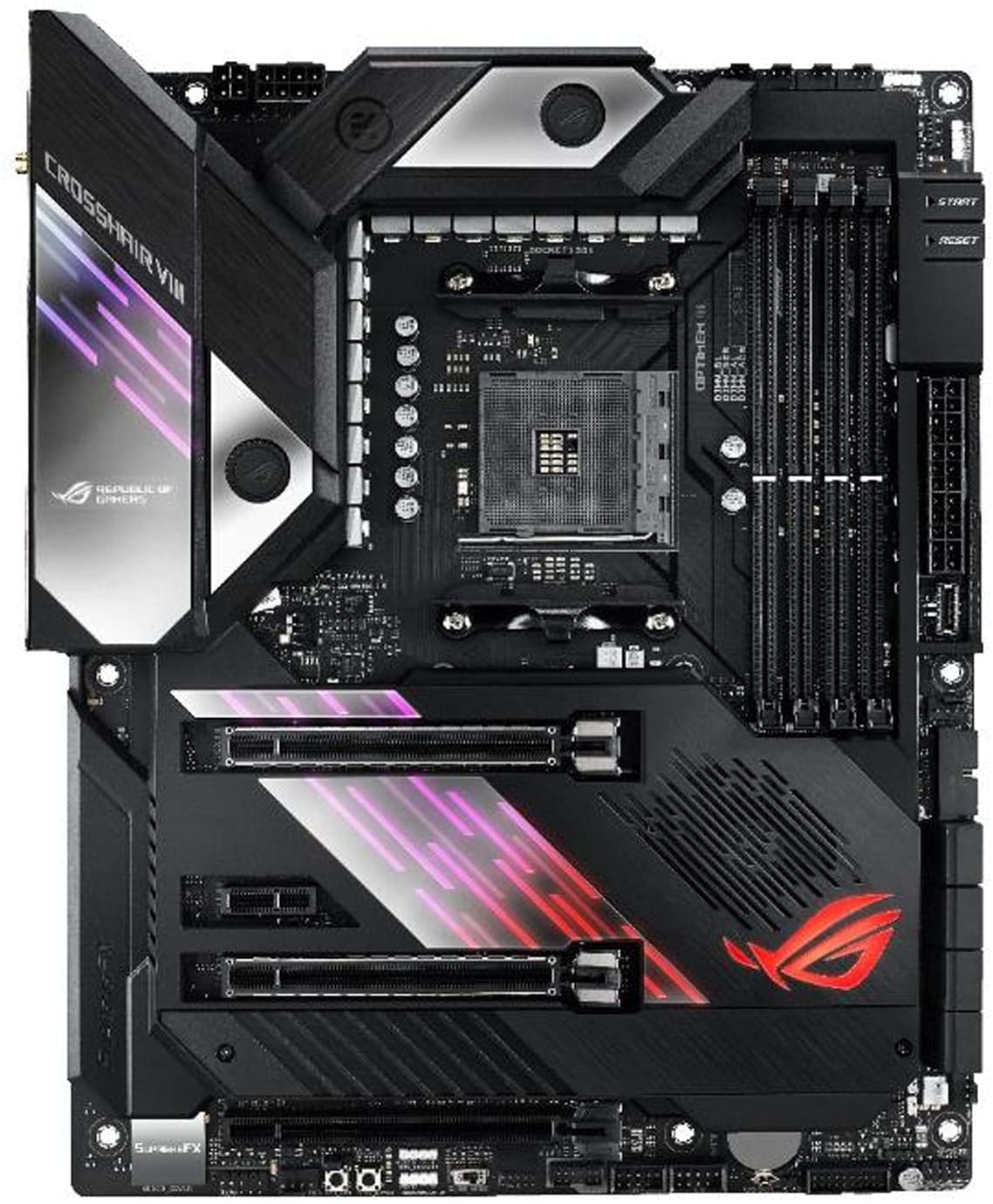 Next to the 24-pin power connector, you have LEDs that indicate the different boot stages so that you know where the issue is if you encounter any. The motherboard features 8 SATA6 ports. Underneath those, you have even more fan headers and an RGB header.

You also have headers for sensors for water cooling such as water in and out temperature. The motherboard even comes with safe boot and retry buttons. There is a fan on the chipset and a vent on the armor of the motherboard so that heat can be dissipated. Under the armor, there is room for 2 M.2 SSDs for your fast storage.

The motherboard comes with Wi-Fi 6. The I/O includes a BIOS flashback button and a clear CMOS button. The motherboard also has 5G ethernet as well as a regular ethernet port and USB Type-C.

The Asus ROG X570 Crosshair VIII Formula has a couple of RGB lighting zones and an LED on the left side which you can customize. Interestingly the jack for your headphones and mic etc also light up.

If you are looking for the best in class motherboard to go with your AMD Radeon 6900 XT then the Asus ROG X570 Crosshair VIII Formula is something that we can recommend.

The Gigabyte X570 AORUS Elite is a relatively affordable X570 motherboard that you can buy right now. AORUS is the premium brand of Gigabyte and this is something that we recommend for the AMD Ryzen 7 5800X and AMD Ryzen 5 5600X. You can use this motherboard with a higher-end CPU but if you are interested in overclocking then you might want substantial cooling or a better motherboard. There is only a single 8-pin power connector so overclocking potential can be a bit limited.

The motherboard does have QFlash so you can update the BIOS without even having a CPU installed. There is a chipset fan on the motherboard and the lack of armor on the motherboard does make it pretty obvious but that is something that you will have to live with for the lower price. It is worth mentioning that the fan only comes on when needed. This increases the lifespan of the fan. There are other motherboards that have the fan running all the time.

There are two PCIe slots and the top one is reinforced for better graphics card support. There are 4 DIMM slots and two M.2 slots but only the top one has a heatsink. If you are interested in getting a heatsink for your second M.2 drive then you can check out our recommendations for the best M.2 heatsinks that you can buy right now. 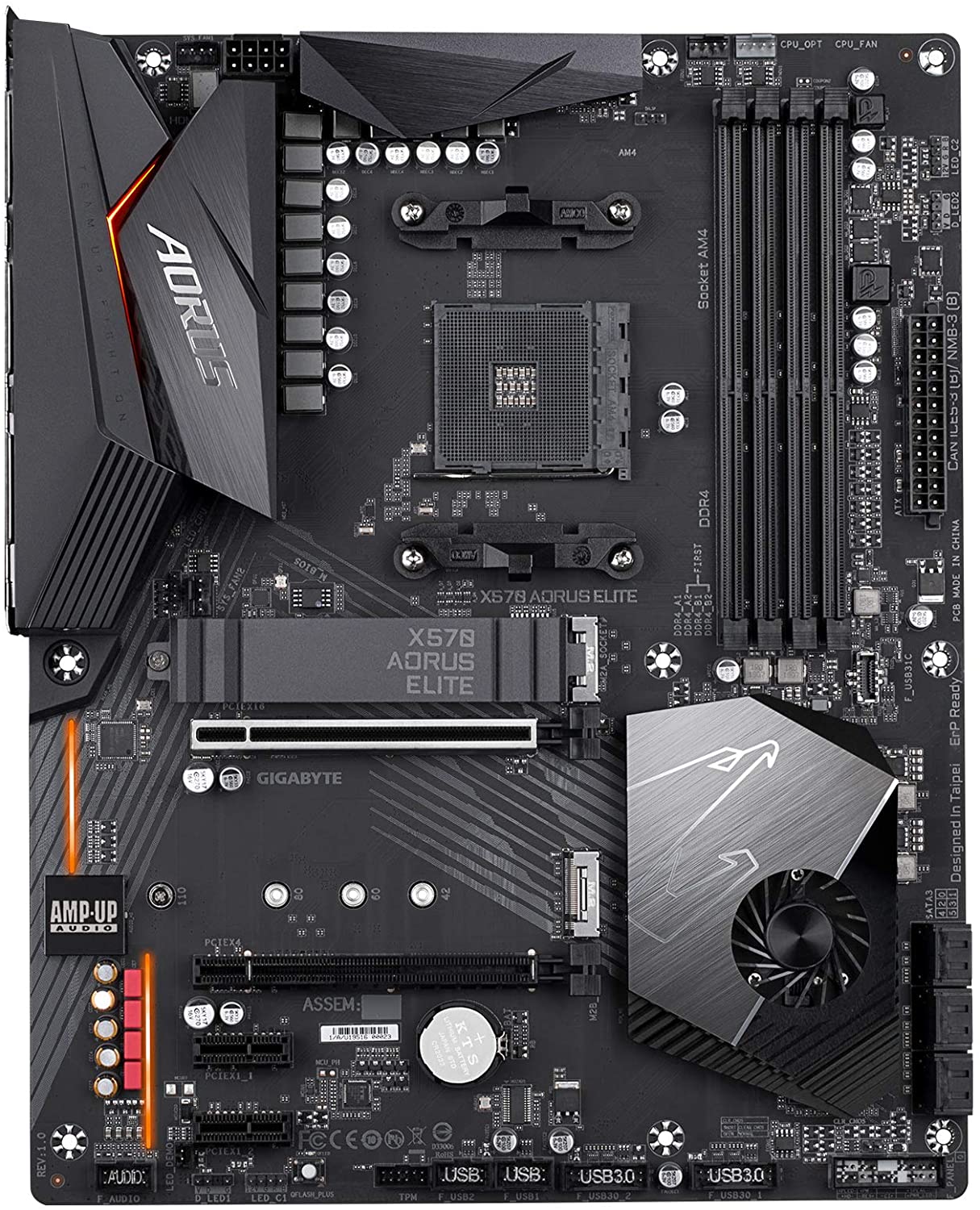 There are no troubleshooting LEDs and that can get a bit annoying when something goes wrong. The motherboard has a 12+2 phase power design which is pretty standard and should work fine as long as you are not heavily overclocking your CPU.

The design of the motherboard is pretty subtle and RGB lighting is limited so it should blend in well with the rest of your setup. The motherboard has a couple of USB ports but there is no USB Type-C port so that might be a bit disappointing for some people.

This is one of the motherboards that we recommend for the higher end AMD Radeon RX 6800 XT and 6900 XT graphics cards.

Here we have an X570 motherboard from Asus. This is from the TUF series so it is going to be of robust quality while still being relatively cheaper than what is available on the market. The motherboard is not all that fancy when compared to the high-end models but it comes with everything that you are going to need for your RTX 3070, 3080, or 3090 graphics card. 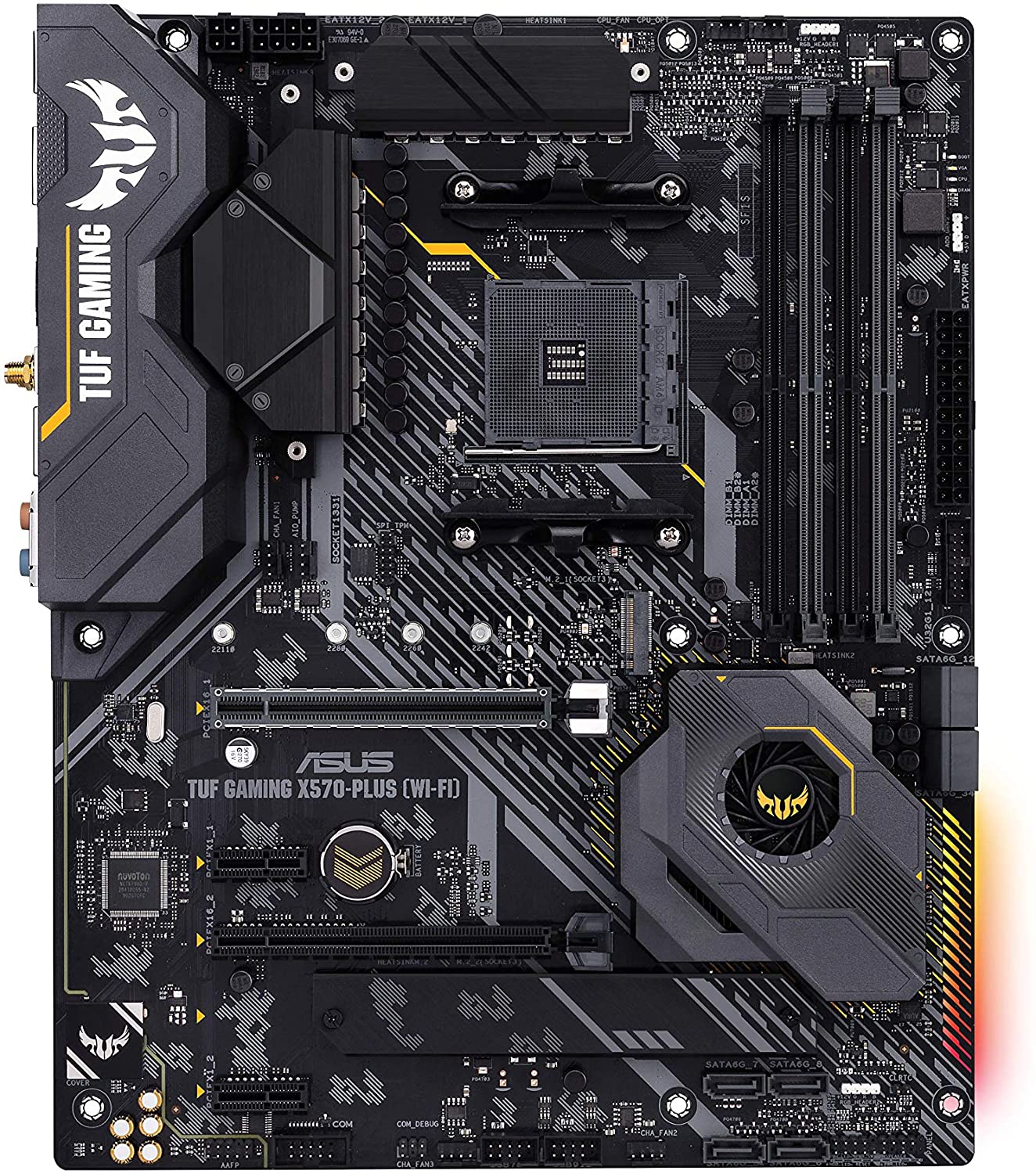 The motherboard comes in Blac and Grey with White accents and looks pretty cool. You have some RGB options to sync with other supporting parts as well. You get active chipset cooling, 4 DIMM slots and two PCIe slots. The top one is reinforced. You also get two M.2 slots for really fast SSD storage.

It does not come with the integrated I/O shield that the higher-end models have but you do get Wi-Fi out of the box. If you need PCIe Gen4 and robust build quality but are not interested in spending a lot of money then this is an interesting option for you to consider.

Here we have an X570 motherboard from MSI. The gaming Edge Wi-Fi comes with all the features that you can ask for and also look great while doing its job. The motherboard comes in Black with White accents and it is going to blend in with the rest of your parts unless you are going for a really unique custom build. 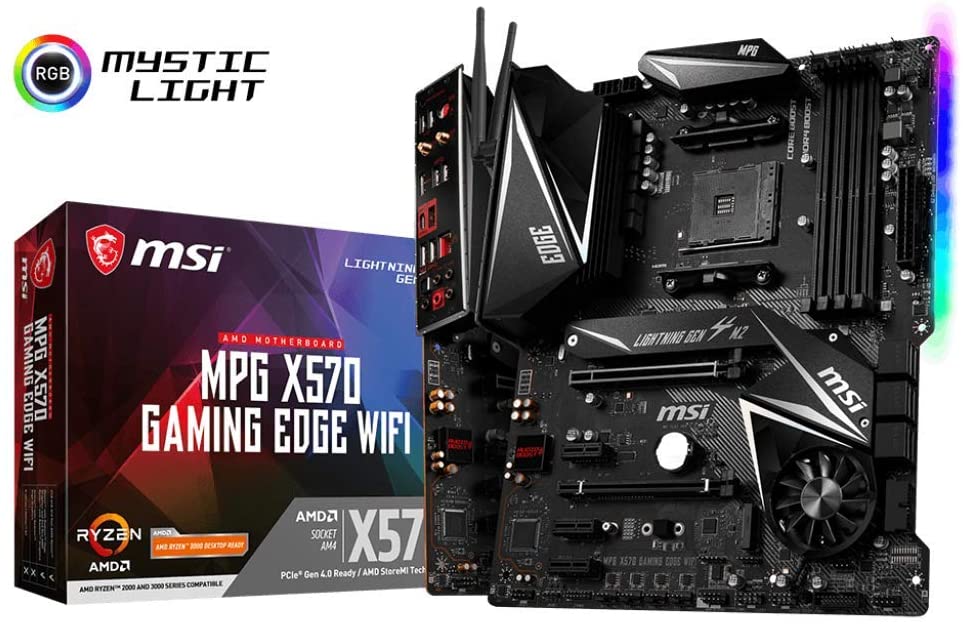 The chipset has active cooling and there is plenty of armor and beefy heatsinks so you can get away with some decent overclocks on your CPU. With PCIe Gen4 this is one of the motherboards that we can openly recommend for AMD Radeon RX 6800, 6800 XT, 6900 XT graphics cards.

The motherboard comes with an integrated I/O shield for easy installation and comes with Wi-Fi out of the box. All things considered, it is an impressive option to consider if you are looking for a premium motherboard that does not cost a lot of money.