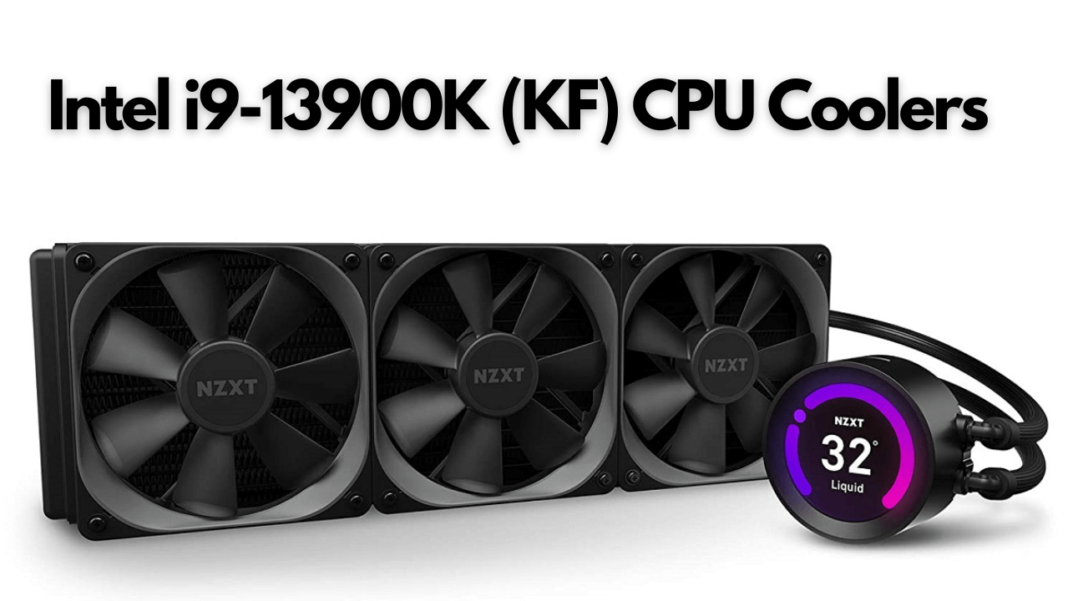 The Intel Core i9-13900K features 8 performance, 16 efficiency cores, and 32 threads. It has a base clock speed of 2.20 GHz and can boost to 5.80 GHz. Since this is a K CPU, you can overclock it to get even more performance with the right cooling. The Intel Core i9-13900KF has similar specifications but does not have integrated graphics. So it is a bit cheaper, and you will need a graphics card for video output.

The EKWB EK AiO Elite D-RGB 360mm is a high-end all-in-one (AIO) liquid cooler designed for gaming and enthusiast-level PCs. It has three 120mm fans and a 360mm radiator, and it can provide outstanding cooling performance for CPUs up to 250W TDP.

The EK AiO Elite D-RGB 360mm’s full-color D-RGB lighting system enables users to customize the lighting on the pump and fans to their system’s color scheme. The bundled D-RGB controller or motherboard software can control the lighting. Furthermore, the cooler has a premium pump built to operate efficiently and silently. Since the pump is built inside the CPU block, the cooler’s overall size is reduced, enabling it to fit in smaller cases.

The EKWB EK AiO Elite D-RGB 360mm provides superb cooling performance and programmable D-RGB illumination. It is a fantastic option for customers who wish to assemble a high-end, stylish gaming or enthusiast PC.

The Corsair iCUE H150i Elite features a vibrant 2.1-inch 480×480 resolution LCD display that you can customize to show information such as CPU temperature and radiator fan speed. The screen can also display GIFs or still images. The ring around the screen has 24 individually addressable RGB LEDs, which you can customize.

It has a 360mm radiator and three 120mm fans with RGB lighting. Inside the box, you also get the Commander Core smart lighting controller, which you can use to control the fans’ speed and RGB lighting effects. While the cooler comes with three fans, the fan controller supports up to six, which should be enough for your case fans.

Not only does the cooler look great, but it is also a performance beast. Compared to some competing 240mm CPU coolers, the Corsair iCUE H150i Elite can lower CPU temperatures by up to 10C. Installation is pretty straightforward as well and should not take long.

The three included 120mm Corsair ML RGB fans have eight RGB LEDs each and are PWM fans with speeds ranging from 450 to 2000 RPM. Since these are PWM fans, you can control the speeds for silent operation. The fan speeds and RGB customization can be done in the iCUE software.

NZXT is known for making some of the best-looking PC parts on the market, and the Kraken X73 AIO CPU cooler is no exception. It has a rotating infinity mirror design on the water block and an improved pump which makes cooling your CPU even easier. With this version, the mirror ring LED is larger and you can orient the water block without worrying about the NZXT logo’s orientation.

The lighting can be customized in the CAM software, giving you plenty of options. It is not the best in the world and could be made better, but that is a trade-off you will need to make for the infinity mirror design. While RGB fans are supported, the ones in the box are standard fans. You will need to get the RGB variants separately, which will increase the cost of the cooler, which does not come cheap, to begin with.

In terms of performance, it performs pretty well, and you can expect the idle temperature to be around 40C and the load temperature to be less than 80C. If you want that infinity mirror effect for your PC build, then this is the cooler than we recommend getting.

Enthusiasts hold the Noctua NH-D15 in high regard as a CPU cooler. It has two 140mm fans mounted on a sizable heatsink for optimum cooling performance. It also includes Noctua’s renowned NT-H1 thermal compound for the best heat transfer. The D15 is a cooler which is ideal for high-end gaming and workstation PCs, as it features six heat pipes and a dual-tower design. It performs exceptionally well in terms of cooling, keeping temperatures around 70°C even under load.

The NH-D15 is simple to install thanks to its user-friendly mounting method and detailed instructions. For those who appreciate a quiet PC, the supplied fans come with a low-noise adaptor that enables users to regulate the fan speed and noise levels. People looking for an air cooler for their high-end PC should strongly consider the Noctua NH-D15. It’s a wonderful option for various consumers because of its compatibility, low noise levels, excellent cooling performance, and simple installation.

While this is a large air cooler, the front fan can be moved for additional RAM clearance if you use taller RAM modules. The Noctua NH-D15 has a Chromax Black variant that comes in black, and the paired fans are black. This is the variant we recommend since black will blend in well with the rest of your build, especially if you are going for an all-black build.

The Be Quiet! Dark Rock Pro 4 is another top pick for the Intel Core i9-13900K. It features a massive heatsink with a single 140mm fan for excellent cooling performance. It also has a stealthy design that looks great in any build. This high-end air cooler is designed for gaming and enthusiast-level PCs. It has a top-down design and a sizable 140mm fan that can produce a lot of airflow while making little noise.

The Dark Rock Pro 4’s low noise levels are one of its main selling points. The 140mm fan can operate at very low RPMs and is paired with noise-dampening rubber pads to help reduce noise even further. The fan can alter its speed in response to the temperature of the CPU because it is PWM-controlled, which enables it to run quietly while providing adequate cooling.

In conclusion, Be Quiet! The Dark Rock Pro 4 is a premium air cooler with exceptional performance and minimal noise. Users who want to assemble a quiet, powerful gaming or enthusiast-level PC should consider this option.

The ASUS ROG Strix LC II 360 ARGB White Edition all-in-one (AIO) CPU cooler is one of the best liquid coolers that come in white. This is ideal if you are interested in building an all-white gaming PC. Three 120mm fans are included with the cooler and are designed for airflow while running silently. You can change the speed of these fans and the RGB lighting effects. The fans can go as low as 840 RPM for silent operation.

The CPU waterblock has the Asus RGB logo and some RGB zones on the sides. The software can customize these to match the rest of your build. The performance is on par with other 360mm AIO coolers on the market, and it is more than capable of keeping the Intel i9-13900K or 13900KF cool even when under load.

The Noctua NH-L9i-17xx is a  low-profile CPU cooler for systems with limited space and small form factor cases. It has a compact size and the chromax.Black has a black color scheme, which makes it an attractive choice for those looking to build a clean and sleek-looking system.

It features a 92mm fan which can run at low speeds to decrease noise. It also comes with Noctua’s renowned NT-H1 thermal compound, which is known for its high performance and ease of application.

The Noctua NH-L9i-17xx chromax is a solid and reliable CPU cooler that can be used in small form factor cases. It is an excellent option for those who want to build a small, silent PC.

These are some of the best coolers we can recommend for the Intel i9-13900K and 13900KF. If you are interested in learning more, you can check out our recommended Nvidia RTX 4090 graphics cards.