Home Articles 10 Best CPU Liquid Coolers To Get For Your Gaming PC In... 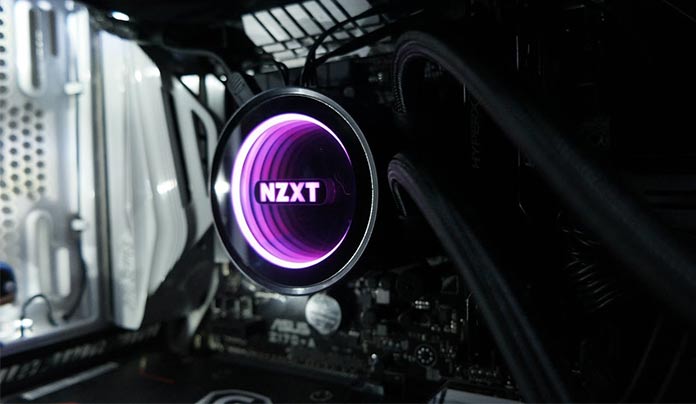 Choosing the right CPU cooler should be on top of your priority list, once you get a system with a high-end build. Your graphic card mustn’t be forced to lower its performance to prevent a burnout, due to the intensity of temperature. The same thing applies to your CPU, as when there is a need for extreme performance, such as during long gaming sessions, it will tend to drop clock speed to keep the system’s sensitive components from being damaged by the heat build-up. In this guide, we are going to go over some of the best CPU liquid coolers that you can buy in 2020.

The better your system is protected from heat the longer and more sustainable its over-all functions will be, a good PC cooler is a must-have. Especially when it comes to gaming PCs which are dealing with a heavier load in comparison to ordinary computers.

Why You Should Opt For CPU Liquid Coolers?

When looking for PC coolers there will be two sorts which you can choose from. There are air coolers, which have a metal heat sink and large-sized fans to pull air away from the processor. Although good for cooling these fans won’t exactly be silent. And do keep in mind that if you increase the number of fans then it won’t mean that the cooling efficiency will increase.

The second option is liquid cooling. This can get pretty expensive as you need a coolant, radiator, pump, tubing. You are also going to need water blocks for your CPU or GPU. This can add up to be pretty expensive. Not to mention that you need to take off the cooler on your graphics card and need to install a special water block. You will also need to install a water block for your CPU. You will also need to plan the flow of the coolant and deal with tubes whether they are hard or soft.

The perfect middle ground is AIO liquid cooling. These coolers are known as all-in-one liquid coolers and what makes them different from air coolers, is that they vent out the heat by sending cooling liquids from the processor to the fans in a constant loop helping to dispel the intense temperature. Although a bit on the expensive side, this option will give you efficiency and silent function which is certainly a more appealing choice to make.

What you finally select will depend on your budget and system compatibility, but it is important to be aware that if you can invest in a decent cooling system then you will be settled in the long run as your PC, whether high-end or a budget build, will be able to give you the optimal performance if it has a smooth airflow. Also note, that apart from a cooling system your PC case should be chosen wisely to keep your system from overheating.

Now that we have all the details out of the way, we are going to move on to our list of 10 best liquid coolers you can get in 2020 for your gaming system.

The following are all the best CPU liquid coolers that we are going to look into in this article and some of their main features that you might be interested in learning about at a glance:

Now that we have got the basic specs out of the way, we can look into each of these CPU liquid coolers and you can figure out which one is going to be the best option for you.

The first on our list is EVGA CLC 240 which is the latest in CLCs liquid coolers. This is a very affordable cooler that gives you the same level of performance as an NZXT or Corsair cooler, but with a great difference in the price range.

The cooler has the same sleeved tubing and the pump head sports a single RGB light.  Although you will not be getting any additional fancy features with this cooler, such as fully encompassing RGB lights, if efficiency is what you are looking for this is the cooling system for you. 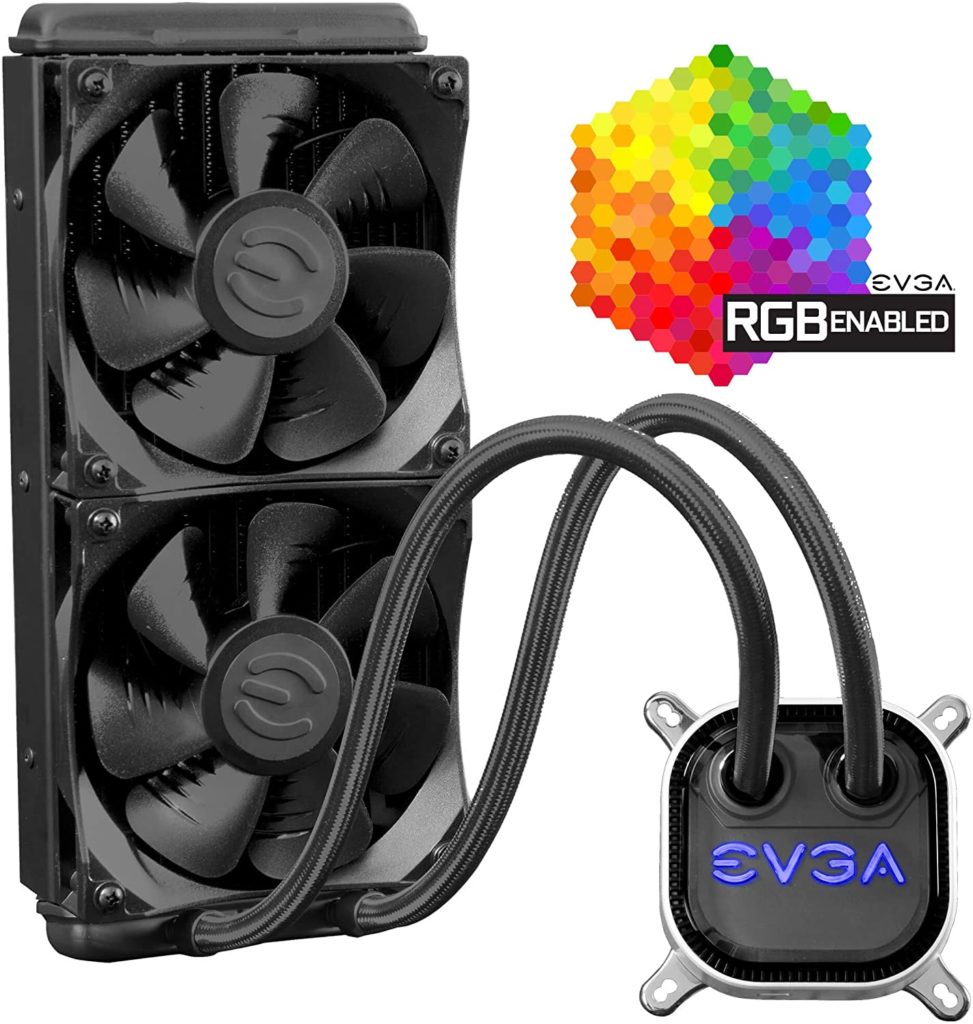 A negative aspect of the CLC 240 is that its fans can get noisy when functioning at full speed. But this would not be making that much of an impact as the cooler gives a good performance without having to reach max speed all the time.

The MasterLiquid ML360R is next on our list and it is one of the best options in liquid coolers you will have when out looking for one in the market. Now its size is quite huge, but when it comes to effective performance in liquid coolers, a radiator with a large surface area can provide you with the efficiency you need.

The ML360R features a 360 mm radiator, triple 120 mm fans, and has fully customizable RGB lights on the pump and fans. The design is beautiful and the lights provide attractive flair. To sum it up, this cooler is a complete package with its awesome look and commendable performance.

Our fourth contender is the Kraken X62, which despite being on the market for quite a while now, is still a recommendable option when it comes to PC coolers. The Kraken X62 is a 280 mm cooler and features dual 140 mm fans. NZXT is known for making some killer PC products and the X62 is an iconic AIO liquid cooler. We love the design of the cooler and that is why this is on our list even though it is older than some other products that we have on this list.

When it comes to looks, the pump head has an infinity mirror design, which makes this cooler a stunning centerpiece for your system. It also comes with a CAM app that allows you to adjust the performance settings to keep noise at a minimum even during extreme load. However, this app does not work as well as it should which does affect the noise level of the cooler. 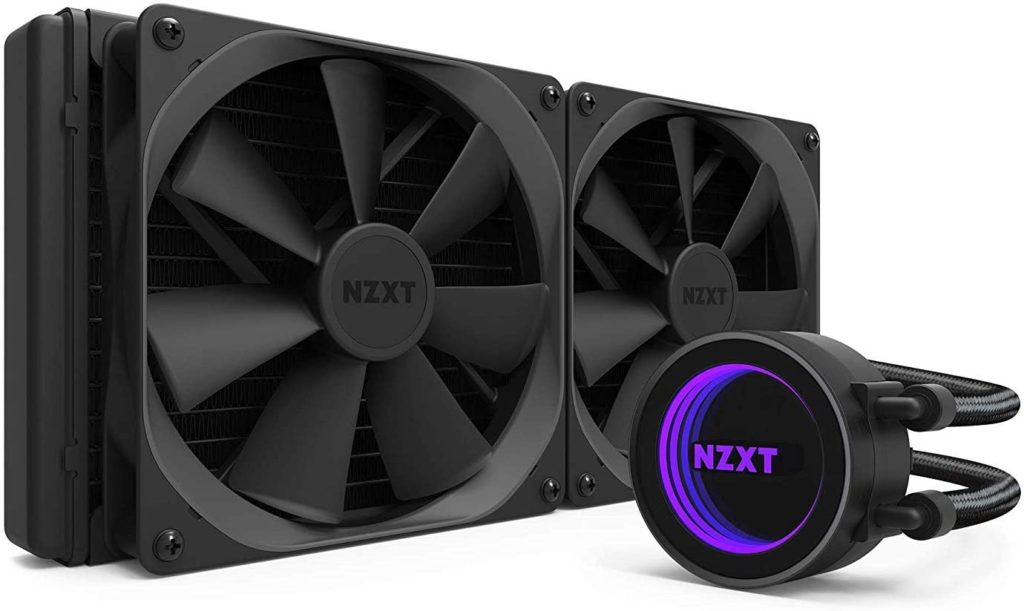 The Corsair H115i RGB Platinum is one of the strongest contenders on this list for being the best liquid coolers in the market. Although the Kraken X62 by NZXT has easily the most incredibly stunning RGB light implementation, the H115i Platinum is a sight to behold.

Moving on to the more important stuff though, the cooler gives a great performance, with its 280 mm radiator giving it ample cooling surface area and dual 140 mm fans with RGB. The noise level is low the installation process is relatively tool-free.

As mentioned in the beginning, liquid coolers tend to be quite expensive if you are working under a tight budget. However, the updated Corsair H60 proves to be an exception, as you will find it relatively affordable in comparison to any other liquid coolers. Do not think though that the performance level suffers at a lower cost.

The cooler has Corsair’s latest 120 mm PWM fans, a 120 mm radiator and a white pump head with LED. The H60 is capable of providing maximum airflow with minimum noise. Its performance is so good that it exceeds the level of any other 120mm coolers and can even equal the 140mm and 240mm liquid coolers in the market. Also, the installation process is considerably easy, as it comes with a tool-free mounting bracket, and it has compatibility with all LGA 2066, LGA 1151 and AM4 sockets. 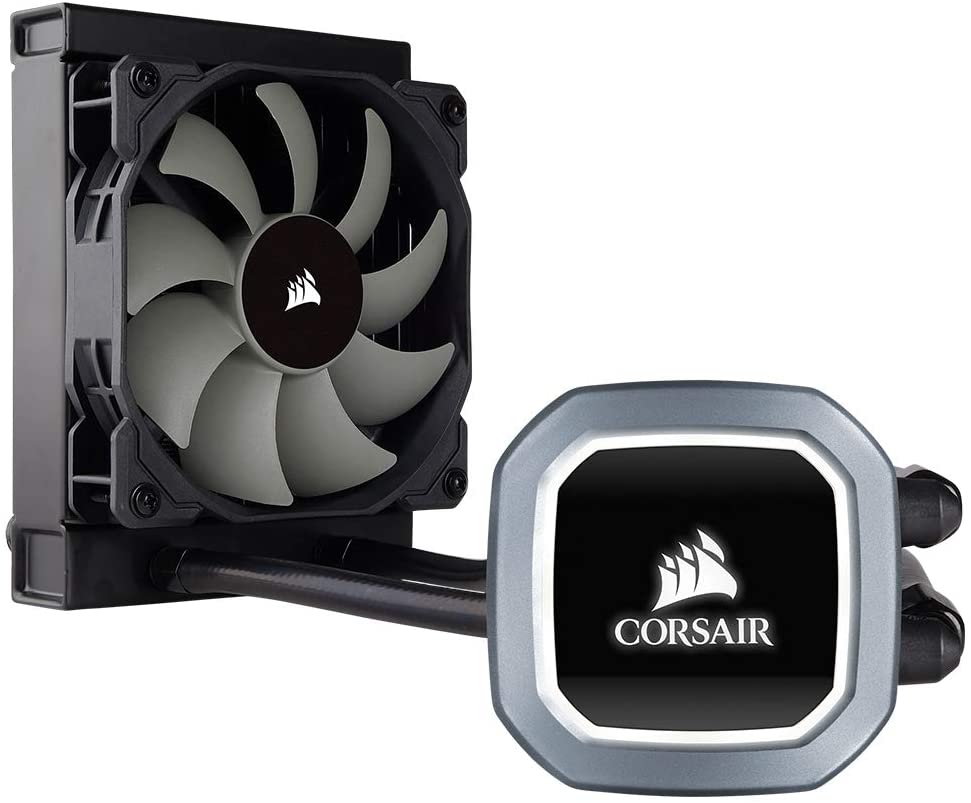 Thermaltake Water 3.0 is another, in comparison to Thermaltake’s other coolers, affordable cooling system for your gaming system. The cooler comes with improved features which lead to better performance.

The 120 mm radiator and dual 120 mm PWM fans maintain efficient cooling with low noise. They also come with a fan and lighting control which allows adjusting of the lighting and you can also switch between low noise or normal performance mode. However, if you are planning on some mild clock speed tuning it would be quite capable but if you wish to do something a bit more intense then this might not be a good choice for you. 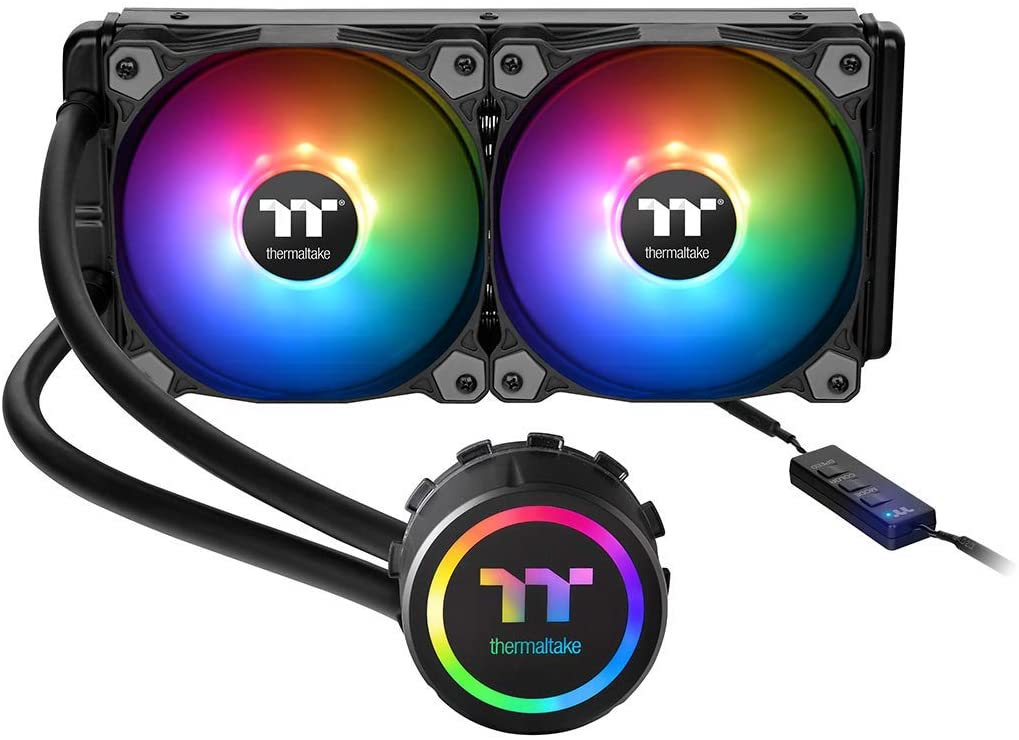 DeepCool is known for coming out with great hardware products in the market and Captain 240Pro is not an exception. With a 240mm radiator, a powerful pump that emits next to no noise and dual 1200 mm fans, you get all the efficiency you need to prevent your system from overheating no matter how long your gaming sessions turn out to be.

The 240Pro is also able to support external management software through connecting your motherboard via a cable. Complete with addressable RGB lighting and controller, it has both the style and function to make it on the list of best liquid coolers. 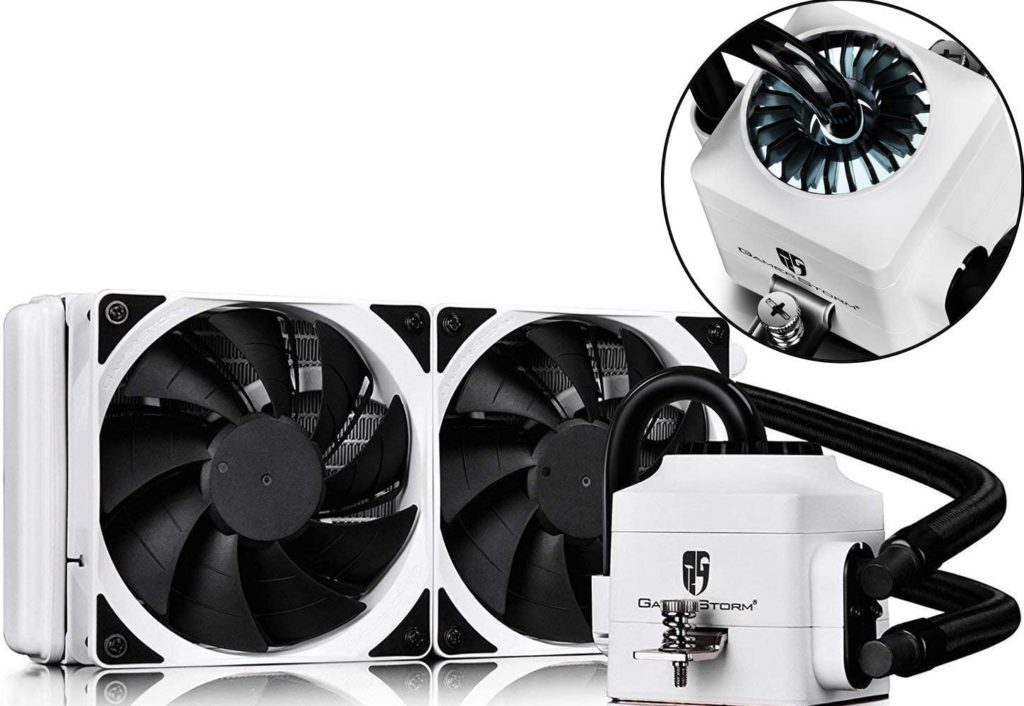 The Liquid Freezer 240 is another one of the budget-friendly coolers we have on our list of Best CPU Liquid Coolers. This cooler promises additional efficiency with four 120 mm PWM that create a full push/pull configuration. Due to all these extra fans functioning in your PC, the Liquid Freezer 240 provides great cooling for the price you pay.

The cooler sports a PWM controlled, copper-based pump which enables less power usage and silent operation. The extra fan beside the pump prevents the motherboard ‘s VRM chips from getting overheated and helps your system bear heavy loads.

The Eisbaer 240 is a genuinely remarkable cooling system by Alphacool. It has both the things necessary for making it a recommended cooler, which are quality performance and affordability. Its standard ¼ inch connectors and refillable loop, allow the cooler to have an added lifespan and room for upgrade in the long run.

The Eisbaer 240 does not come with any fancy RGB lights, but it has a no-nonsense design with dual PWM 120 mm fans, sleeved fan cables, an integrated pump and a CPU block with G 1/4” fittings which enable easy customization and expansion. 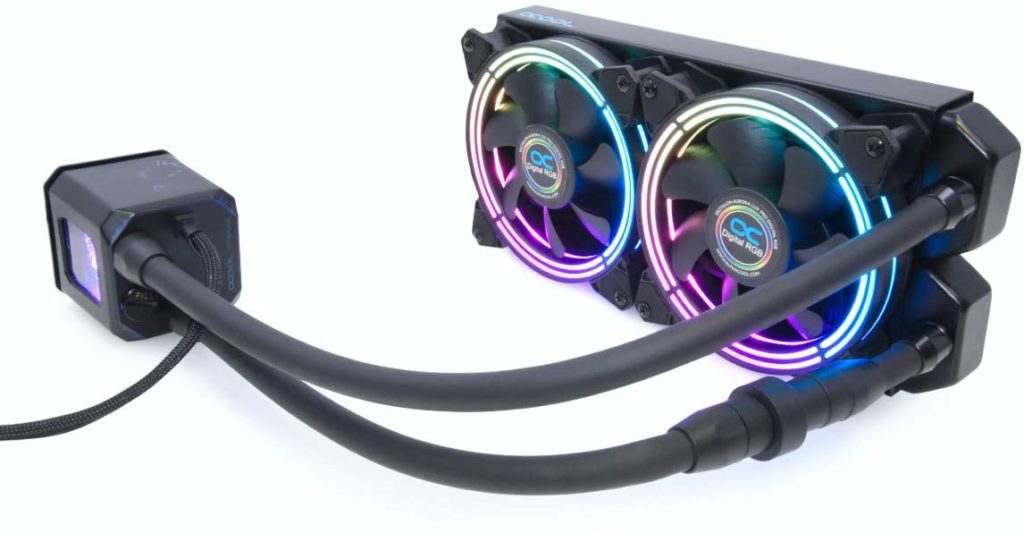 The last cooler on our list of Best CPU Liquid Coolers is the Thermaltake Floe Riing 360. Now this is admittedly a rather hefty cooling system with a 360 mm radiator and weighing 3.5 pounds overall, but when it comes to dissipating heat this added surface area is what does the trick.

Although the performance of the Floe Riing 360 is quite similar to several other 280 mm coolers, it does boast a 30% lesser noise level as the triple 120 mm fans do not have to take that much pressure with the big radiator to assist. 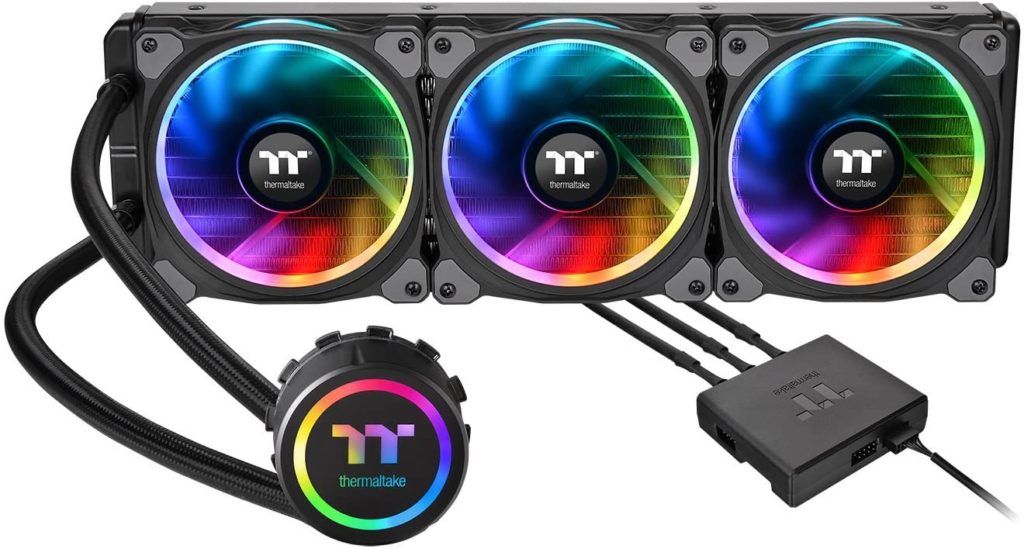 If you are a fan of added flair in your hardware then this cooler won’t disappoint you in that area either, as the fans sport 16.8 million colors LED ring and 12 addressable LEDs. The RGB controller hub is included. The Riing Plus RGB Software even has the added perk of real-time fan warning alerts to inform you of any issues in the performance.

Here ends our list of best liquid PC coolers you can find in 2020. Whether you need a budget-friendly option or looking to rig up an overclocked high-end PC, we have summed up some of the most excellent products you can find in the market.