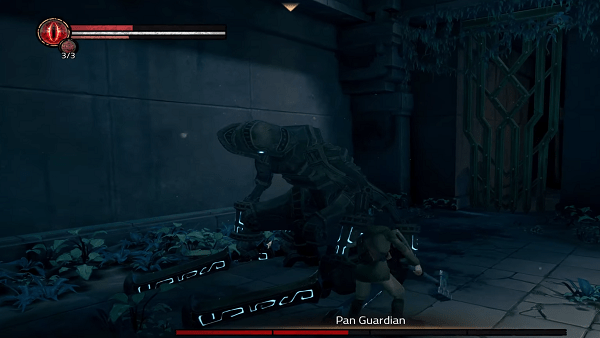 Chronos: Before the Ashes Boss Fight – How to Beat the Pan Guardian

For this boss fight, it is a good idea to have the Krell Hammer and Shield equipped. The Pan Guardian is a giant but he has some quick attacks that can catch you off guard. As soon as you enter the boss area the Pan Guardian will come to life.

One of the attacks you need to watch out for come from his bottom half. He swings his bottom half to attack. He can also create a shockwave by smashing the floor. The shockwave can stagger you for a bit, opening you up for his swing attacks.

Keep your shield up when facing the Pan Guardian and try to get behind him. Although he can swig portions of his body, he can still be vulnerable from behind. Keep dodging and chipping away at his health. Once you do enough damage he will drop down to his knees and you will be able to hit him quite hard. He drops down once per life bar which gives you a good opportunity to smash his next health bar before he gets up.

Eventually, he will charge up to add electricity to his attacks. At that point, his attacks become quicker and he rushes you as well. Keep your distance and release the shield. Having the shield up will slow down your movement speed which makes it harder to move out of his way.

As soon as he stops rushing, land your hits and retreat to safety. Keep at it and you’ll be able to beat the Pan Guardian in Chronos: Before the Ashes.