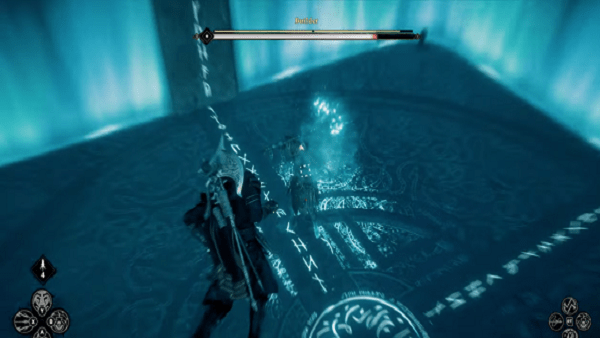 Assassin’s Creed Valhalla Boss Fight: How to Beat the Builder

When you reach a certain point in The Big Finish main mission in Assassin’s Creed Valhalla, the Builder will reveal his true nature and intentions to Eivor. As soon as he reveals his true nature, he will turn into a massive Jotunheim. To beat the Builder you need to target the weak point on the top of his head. You can keep shooting at his head with a bow to deal a little damage every time. However, it takes longer to beat him this way as it is hard to land a perfect shot every time. There is a way to increase your accuracy against the Builder in this boss fight.

When the Builder slams into the ground, you’ll see a spark of magic traveling outward. If you are in the way of the spark you can launch yourself into the air and aim your bow at Builder’s head. As soon as you aim at him the game will go into slo-mo for a bit which allows you to shoot your bow with increased accuracy.

Keep standing in the path of this magic spark to launch yourself in the air and shoot at the Builder’s weak spot to defeat him in Assassin’s Creed Valhalla.

The attack you are looking for begins with a circle on the ground that follows you. Remain inside the circle to get a hit and launch yourself in the air. However, if this method is too difficult, you can keep attacking him with your other weapons, and occasionally shoot an arrow on his head.

And that’s all you need to know on how to beat the Builder in Assassin’s Creed Valhalla. You can also see Eadwyn, Loki, Rued, and Ynyr boss fight guides.