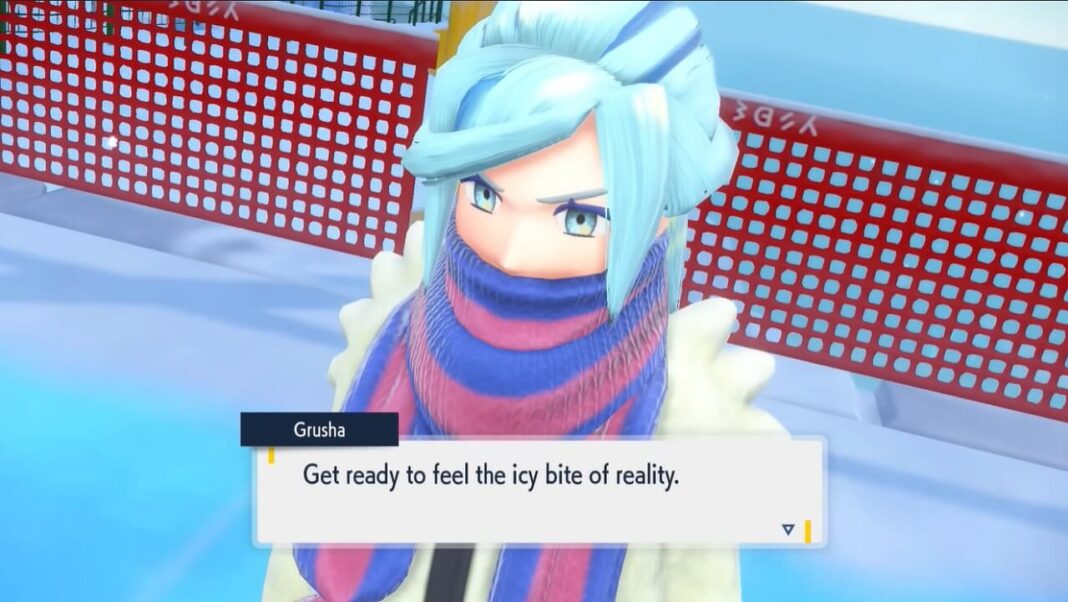 The Glaseado Gym is the hardest to beat since it has the hardest leader, Grusha. Located at Glaseado Mountain, there is little else in the area other than the gym itself. In this Pokemon Scarlet and Violet guide, we go over how you can beat Grusha, the Glaseado Gym Leader.

Before you can take on the Gym Leader, you need to complete the Glaseado Gym Challenge. This is pretty straightforward, as all you really need to do is get to the bottom of the mountain on your point in 90 seconds. Be sure to hit the rainbow barriers in order to add 5 seconds to your time. Once you have completed the challenge, you can now challenge Grusha.

Since Grusha is one of the strongest Gym Leaders in the game, you can expect his Pokemon to be high-level. You Pokemon should be around level 48 in order to make the encounter easier. All of Grusha’s Pokemon are Ice-type, so you need to know that and counter accordingly. The following are all the Pokemon that the Gym Leader uses and how you can count them:

Frosmoth is an Ice-type Pokemon so you can counter it with Fire, Rock, Fighting, and Steel-type attacks. Skeledirge is going to be ideal here. This is the evolution of the fire-start Pokemon Fuecoco.

Fire-type Pokemon are not going to do well against Beartic since it has the Earthquake and Aqua Jet abilities. Fighting-type Pokemon are going to be much more effective here. We recommend using Machamp or Lucario.

Cetitan has water attacks that deal a lot of damage to Fire and Ground-type Pokemon. You can still use Fire attacks in order to deal damage though since they are going to be very effective.

The Altaria has different types of attacks such as Moonblast which is Fairy-type and Hurricane which can confuse your Pokemon. We do not recommend using Fighting-type Pokemon against Altaria. We recommend using Pokemon that have a lot of speed and can do physical attacks.

Once you have defeated Grusha, you will be rewarded with 8640P and the Gym badge of Glaseado. Pokemon will now be easier to train and you will also find higher-level Pokemon in the wild. You will also get the Ice Spinner TM.