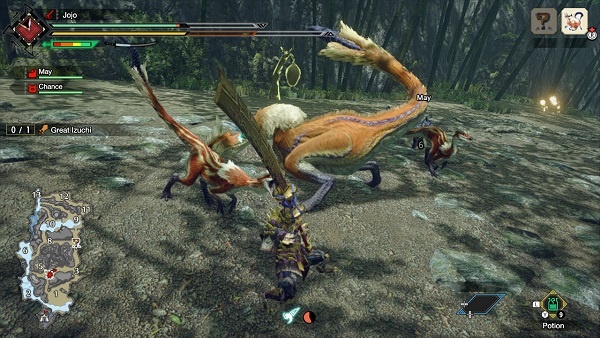 How to Beat Great Izuchi in Monster Hunter Rise

The monster can be found in the Frost Islands, Shrine Ruins. It’s a Bird Wyvern and its head and tail are the spots that players need to target during the fight. This can be a little hard with ranged weapons since the Great Izuchi loves to hop around the area. Before the fight, players should try to have things like Potions, Max Potions, Barrell Bombs, and any other buffs that they can get.

When it comes to the actual fight, movement is the key! Players should always focus on staying on its sides and avoid facing it head-on the best they can. By doing so, they’ll avoid most if not all of its attacks.

In addition to this, the Great Izuchi also has a Charged Attack that it performs after stretching its claws forward. Players need to try and dodge away from it the best they can since it can deal a pretty good amount of damage.

There are also a couple of tail-based attacks that the Bird Wyvern performs. Sometimes, it’ll lower itself to perform a Tail Whip attack that also has a follow-up. Remember to dodge away behind it to stay safe. Another one is its Tail Slam attack that it performs after raising its head. Once again, by dodging to the side, the attack can be made to whiff entirely.

After its health is lowered enough, it’ll become enraged and start to attack more aggressively. Counters should work like wonders during the enraged state. Players simply need to keep at it until it becomes exhausted, trap it, and move in for the kill. Other than that, there isn’t much to it.

Once defeated, it’ll reward a number of items including the following: